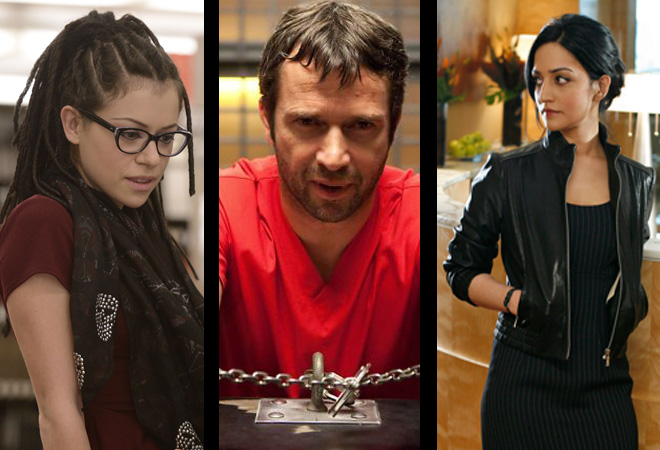 The Primetime Emmys are happening on Sunday. We’re just as excited as the next person to see if Game of Thrones will take home any hardware, whether wins by House of Cards and Arrested Development will officially mark a new distribution paradigm, and if anyone besides Claire Danes has a shot at winning Best Actress in a Drama. But we’re more interested in the sort of awards that will never be handed out.

Best Excuse to Bare Your Midriff in a Period Drama
Game of Thrones
Between Daenerys’ warrior queen getups, Margaery Tyrell’s cutaway gown (shorten the hem and she’d look like every other Coachella coed), and the constant procession of prostitutes, mistresses, and lovers, there’s no shortage of skin in Westeros—or in King’s Landing or in a Dothraki khalasar.

Least Likely Serial Killer Mastermind
Joe Carroll – The Following
It’s hard enough to believe that Joe Carroll is a brilliant Edgar Allen Poe scholar. (Ever notice how these onscreen Poe acolytes don’t go much beyond quoting The Raven?) Now, we’re supposed to believe he’s the charismatic mastermind behind a cross-country cult of secret serial killers. Seriously? The dude would have trouble mustering the “command presence” to oversee the late shift at McDonald’s. However, we totally believe Valorie Curry as Emma, the red-headed pixie who is made of pure evil.

Show Most Likely to Inspire Inappropriate Halloween Costumes
American Horror Story
Arrive at your office Halloween party decked out in this skin-tight, rubbery gimp outfit and don’t bother explaining what show inspired your costume; just wait for the inevitable warning letter from HR.

Best Tough Chick
Kalinda Sharma – The Good Wife
This isn’t a category with a ton of competition. There are bona fide ass-kickers like Ziva David and Kensi Blye, then there are tough chicks like Daenerys Targaryen, Hetty Lange, Skyler White, and Gemma on Sons of Anarchy. We chose Kalinda (played by Archie Panjabi) because she combines it all—brains, street smarts, covert connections—and she looks great doing it. Most crucially, she could kick your ass in a fight without scuffing her knee-high boots.

Best Show You’re Not Watching and Probably Hadn’t Heard of Until the Emmys
Orphan Black
It’s Canadian, so maybe that’s the reason it hasn’t gained widespread acclaim, but among Orphan Black’s coterie of fans, the devotion is fierce. The show’s premise, which follows a con woman who assumes the identity of her clone after the latter commits suicide, required Tatiana Maslany to play five separate characters in the first season. Talk about an acting challenge.

Most Acerbic Detective, Doctor, or Other Oddball Professional
TIE: Benedict Cumberbatch – Sherlock and Johnny Lee Miller – Elementary
Nobody plays brainy and supercilious like the Brits, whether they’re in a show that originated abroad or on these shores.

Network Show Trying Hardest to be a Cable Show
TIE: Hannibal and The Following
Call it the Deadwood effect. Back in 2004, David Milch’s neo-retro western broke ground as much for the complexity of its characters and the lyricism of its dialogue as for its rampant cussing, violence, and sex. It was followed by a raft of brilliant cable shows—The Wire, Mad Men, Game of Thrones, Breaking Bad—that unwound slowly and treated viewers as adults. These shows depicted drug use and sexuality with realism and grit. Characters weren’t automatically punished for “amoral” behavior. Episodes (and seasons) often unfolded slowly, leaving viewers to fill in the blanks for themselves. On non-network shows like Orange Is The New Black and The Walking Dead, this ethos is par for the course. Most network TV remains mired in a bland, paint-by-numbers aesthetic that feels increasingly anachronistic—and boring. Where does that leave their dramas? Desperately trying to ape cable television but lacking the guts or the creative freedom to do it. Instead of nuanced, original characters engaging in potentially questionable behavior (i.e. human beings) we get the baroque, amped-up bloodshed of Hannibal and The Following paired with protagonists who display every cliché of the “rogue detective” archetype. Lone wolf who has trouble working with others? Check. Water bottle filled with vodka? Check. Savant who is tormented by his gift? Check. It almost makes you wish for Joe Friday.

*On a sidenote, Hannibal is the most cinematic and best looking drama on network television.

Best Anti-Hero
Walter White – Breaking Bad
Obviously. Even after this week’s episode, we still want Walt to get away with it.

Best Anti-Anti-Hero
Lesle Knope – Parks & Recreation
Amid a TV landscape cluttered with serial killers, biker gangs, and high school teachers-turned-drug dealers, sometimes it’s nice to see a show where sweetness and simplicity pay off. Leslie’s eternal optimism, her unassailable belief in herself, and her unflagging love for her hometown are almost beyond belief but Amy Poehler makes the character winning.

Best Minion, Henchman, or Assistant
Avi – Ray Donovan
We have adored Steven Bauer since his turn as Manny in Scarface. We loved seeing him during his brief stint as Don Eladio in Breaking Bad. Once again, he’s stealing scenes as Liev Schreiber’s go-to-guy, former Mossad agent Avi.