Home Uncategorized 10 Best Moments at the Emmys, circa 2012 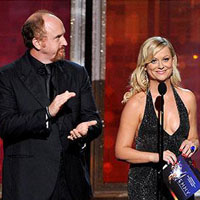 It was a big night for Homeland, Modern Family, Game Change, and Louis C.K. and a very small (or not at all) night for Breaking Bad, Mad Men (0 for 17; ouch), Girls, and Downton Abbey. But who cares about that when you have all that false humility and gravity-defying cleavage to gape at?

Think of the Emmys as the less uptight sibling of the Oscars. If the Academy Awards are the pompous uncle who prefaces every utterance with the stamp of importance, then the Emmys are the fun aunt who gets tipsy and tells ribald stories at backyard barbecues.

10. Best Bad Joke: Host Jimmy Kimmel had plenty of great jokes, but sometimes they were so wrong they could only be right. “HBO got 81 nominations,” he said. “But it was a bumpy year. Luck was canceled.” Then Kimmel offered a bit of horse sense: “By the way, if you’re going to the HBO afterparty, don’t eat the sliders.”

9. Most Heartfelt Acceptance Speech: Winning for best supporting actor in a comedy, Eric Stonestreet of Modern Family first of all thanked his onscreen partner. He said of Jesse Tyler Ferguson, who was also nominated in the category: “There is no Cam without Mitch.”

8. Best Frenemy Co-Presenters: In their upcoming drama Nashville, Connie Britton plays an aging singer and Hayden Panettiere a scheming upstart. (Think All About Eve set in the world of country music.) On stage, as the two presented the award for best drama, they looked stiff, awkward and uncomfortable, almost like they were trying not to claw out each other’s eyes. That tension should play well on screen.

7. Best Fast Food Reference: In a skit where the actress who plays 3-year-old Lily on Modern Family terrorizes her castmates, she eats a Chik-fil-A sandwich in front of Ferguson (who is gay in real life) and taunts him: “I know what I’m going to serve at my wedding.”

6. Best Bad TV Reference: Thank you, Homeland dudes, for the evening’s sole Spenser for Hire reference. It didn’t top Seth McFarlane’s crack about Joey Greco, which is the only Cheaters reference you’re likely to hear at the Emmys — tonight or ever.

5. Best Humblebrag: And the award goes to… Modern Family’s Steve Levitan who won for directing a comedy series and said, “I want to thank me for hiring me as a director when nobody else would. A friend said to me: ‘With your cast, your writers, and your crew, a complete idiot could direct your show.’ I think we’ve proven that tonight.”

3. Most Shamless Act of Nepotism: Anyway you cut it, giving a best directing Emmy — even if it’s for another show — to the guy who’s sitting in the booth directing the Emmys, stinks of bias.

1. Most Obvious Case of Highway Robbery: Let’s just make sure we understand: Breaking Bad, which is in its brilliant final season and comes into the awards show as both a fan and critical favorite, walks away with a whopping total of one Emmy (Aaron Paul for supporting actor in a drama), while Homeland in its first season gets four: best lead actor, best lead actress, best writing and best drama. This is TV’s equivalent of the perfectly acceptable but middling How Green Was My Valley beating Citizen Kane and The Maltese Falcon for a Best Picture Oscar.

BONUS: Best Gag: A bit in which some of the lady nominees — including Zooey Deschanel, Kathy Bates, Mindy Kaling, and Connie Britton — hear wailing in a restroom stall and open the door to find a naked Lena Dunham gorging on cake.