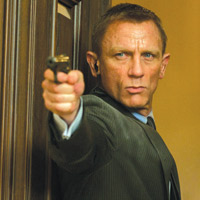 When Skyfall opens on November 9, Taschen will debut The James Bond Archives, a 600-page, $200 megabook with 1,100 photos and arcane details about the superspy’s 23 films

1. Heartbreak Hotel
For all the exotically named women he bedded, even James Bond had the One Who Got Away: his wife, Tracy Draco. The marriage was short-lived—about six hours. She was gunned down on their wedding day in On Her Majesty’s Secret Service.

2. Shaken, Not Stirred
Although he played the suave British spy seven times over the course of 12 years, Roger Moore never once ordered Bond’s iconic vodka martini onscreen. He did, however, have the drink served to him three times. Consistency in cocktails has its perks.