Home Art Why Doesn’t Skid Row Have a Neighborhood Council? Activists Sound Off in... 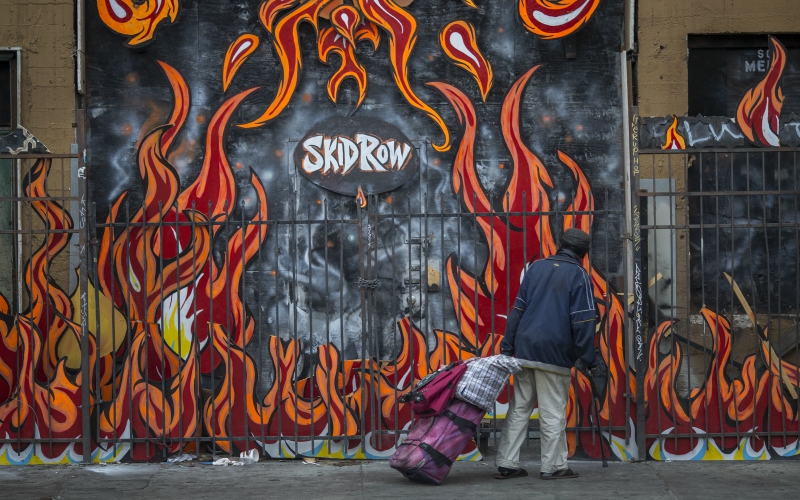 The museum’s latest exhibit puts names and faces to the heretofore nameless and faceless social forces that shape policy around downtown L.A.’s twin issues: relentless development and rampant homelessness. Downtown is undergoing the largest construction boom in its history, and economically thriving neighborhoods like Pershing Square and the Arts District are pressing against the boundaries of Skid Row, long home to the largest concentration of homeless people in the country.

Zillionaires Against Humanity: Sabotaging the Skid Row Neighborhood Council reveals how a group of downtown power brokers secretly thwarted an effort by anti-poverty activists to form an independent political entity within the historic boundaries of Skid Row. Little known outside Skid Row, it has become a cautionary tale in the battle for the future of L.A.

“It was such an extraordinary circumstance, the lengths to which people went to defeat Skid Row from having its own neighborhood council,” says John Malpede, the exhibit’s curator. Malpede, a former drama instructor at UCLA and NYU’s Tisch School of the Arts, is director of the L.A. Poverty Department, a performance troupe he founded in 1985 that’s comprised mostly of homeless and formerly homeless people on Skid Row.

“To dismiss a whole community that has real insight into the needs and cares about the people in the street, to stifle their voice is really a disingenuous way to claim you want to solve anything,” Malpede adds.

If the story lacks the criminal element of a true Los Angeles noir story, it at least illuminates the role that self-interest plays in the approach to the homelessness crisis and reaffirms the truth of the old saying that the making of public policy, like the making of sausages, is not a pretty sight.

Zillionaires Against Humanity is an exhibit in three parts. The first part is a timeline display of events, assembled by two of the activist leaders, General Jeff Page, and Katherine McNenny. The second is a display of bulky HR Trinitron monitors Malpede borrowed from Chinatown’s Box Gallery, which show videos by filmmaker Linus Shentu of planning efforts and a pep rally on Skid Row, and of political intrigue as it played out in real time at public hearings at City Hall. And, finally, the third part is a display of 20 illustrations by satirist and investigator Adrian Riskin that mockingly depict key members of the alleged plot.

The exhibit is brought to you in part by the California Public Records Act, the state law that compelled various downtown Business Improvement Districts to turn over emails to Riskin on request.

Riskin, a 54-year-old associate professor of mathematics at Whittier College, used a free image editing program to morph photos of powerful figures in the world of downtown development into cartoon-like illustrations suited for a graphic novel. He took excerpts from compromising emails and transcripts of public testimony and inserted them into speech bubbles in the illustrations.

Some of the narration is just stuff he made up to antagonize them. “I want to talk about them in the same kind of way I have seen them mock and dehumanize homeless people they don’t approve of in meetings and emails,” he says.

Business Improvement Districts, or BIDS as they are known, are membership groups of land and business owners in a geographically defined area that pay an additional tax to fund special projects within their boundaries, including private security. “They have a huge hand in homeless policy,” Riskin says of the BIDs. “The city grants them incredible access and influence over neighborhood policy.”

BIDs are also quasi-public entities, meaning they are subject to public record requests. “I’m using the contents of their own records to terrorize them,” Riskin said.

The postcard for Zillionaires Against Humanity is an illustration of Estela Lopez, executive director of the Central City East Association, the Business Improvement District that covers most of Skid Row. Riskin rendered Lopez in the image of the Wicked Queen from Snow White and even wrote a dramatic monologue for her which reads, in part: “Dip the apple in the brew. Let the sleeping death sleep through. Now, turn red to tempt Skid Row, to make them pack their shit and go.”

“She orchestrates things behind the scenes to a huge extent, which I didn’t know until I started requesting emails from all BIDs from her,” Riskin says. Lopez did not immediately respond to a request to comment on the exhibit.

On January 11, 2017, the city of Los Angeles approved a petition to form a new neighborhood council and set the date for an election that would determine if residents of Skid Row would be able to secede from two larger neighborhood councils in downtown Los Angeles. The vote was open to property owners, employers, workers, residents and community volunteers in a vast area of downtown and Northeast L.A. — all to determine who would represent the 10,000 residents living in the 50 blocks at the core of Skid Row bounded by Main, Alameda, 3rd and 7th streets.

Neighborhood councils advise city government on issues relating to land use in their district. Though they have no formal authority, a well-organized council can create headaches for a developer when the majority does not approve of the development. Proponents of the Skid Row Neighborhood Council, in their statements and in their petition to the city, made it clear that part of their motivation was to reduce the influence of “downtown business interests” at a crucial time in Skid Row’s history.

Charles Porter, the coordinator of a drug prevention program on Skid Row told me the effort meant “the opportunity to redefine our own neighborhood.”

On March 22, at a special hearing held just 15 days before polling was to begin, L.A. City Councilmember Jose Huizar moved that the Department of Neighborhood Empowerment enable online voting for only the Skid Row election. The decision ended up being pivotal: The proposal for a Skid Row Neighborhood Council was defeated by a vote of 826-766, and 807 of the NO votes (and 581 of the YES ones) were submitted online. According to Huizar spokesman Rick Coca, the process of resuming online voting had been in the works for a while. In an interview last year, Coca explained, “It looked like we were doing this 14 days before the election when in reality we had done it six month before that.”

A temporary ban on online voting remains in place for neighborhood elections across the city. (Huizar’s speech bubble in one drawing addressed Skid Row with a denunciation loaded with so many F-bombs as to make it unprintable.)

And Riskin found the eleventh-hour rule change was preceded by a $45,000 lobbying campaign funded by property owners in the proposed new neighborhood council. These owners formed a holding company in Delaware called United Downtown L.A. and engaged former L.A. City Attorney Rocky Delgadillo, now a lobbyist with the firm Liner LLC, to lobby the city on their behalf. City records show the phone number for United Downtown L.A. is that of Lopez’s Central City East Association.

Activists accused the larger council of using a “front group” to campaign illegally against the secession bid, and a three-member panel later recommended an investigation and new election within 90 days, this time without online voting. But the city’s Department of Neighborhood Empowerment tossed out the results and certified the election. Proponents of the Skid Row Neighborhood Council can apply again in October 2018.

General Jeff Page, the lead organizer of the effort, told me last year: “I hear a lot about progress, but the progress has not been made on Skid Row, only around Skid Row. And that’s exactly why Skid Row wants to have the chance to represent itself.”

The Skid Row History Museum & Archive, 250 S. Broadway, downtown; Thu.-Sat., 2-5 p.m.; Zillionaires Against Humanity will be on exhibit through June 30.

RELATED: A Putt-Putt Course Will Make You See L.A.’s Housing Crisis in a New Light