Home Politics Your Guide to Power in L.A. 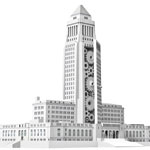 On March 5 Angelenos will vote for a new mayor in a primary election. If nobody wins more than 50 percent, the top two candidates will face off on May 21. It’s not just the mayor’s office that’s up for grabs. Voters will choose seven city council members, the city attorney, and the city controller. Even if you don’t live within the city’s boundaries and can’t cast a vote, who runs city hall can have a profound impact on your life.

Why Don’t We Have a Bloomberg?

The Face of L.A.
aka the Mayor
L.A. mayors complain about how weak the office is. Compared with the mayors of New York City and Chicago, who stand astride their cities like Roman emperors, they’re right. The reformers who built city governments west of the Mississippi wanted to avoid boss mayors. But the mayor’s office in L.A. has never been all that weak, and the 1999 city charter revision (which, full disclosure, I helped draft) gave the office more sway than it ever had.

The mayor proposes a city budget to the council. The council can adopt or amend the budget—which the mayor, in turn, can veto or alter using the line-item veto. (The council requires a two-thirds majority to override either.) If the council fails to vote on the budget in time, the mayor’s version becomes law. The new charter made it clear that the mayor, not the council, runs the city government on a daily basis: The mayor appoints department heads and can remove them unless two-thirds of the council overrides the decision. The mayor chooses most city commissioners and usually can ax them without the council. The mayor appoints the chief of police, who can’t survive without his or her support (think Willie Williams and Bernard Parks). And the mayor not only serves on the 14-member MTA board but selects two members from the public and one from the city council. (One realm the mayor struggles to influence is the school system, which is run by a seven-member elected board.) Of course the mayor can’t succeed without political savvy, communications skills, and the ability to build consensus.

Just How Mighty Is Our City Council?

The People’s Reps
aka the City Council
No other large metropolis’s council wields as much authority as L.A.’s. Limited to three four-year terms, its 15 members each represent well over 240,000 people. While the revised charter of 1999 cut back some of the council’s ability to order department heads around, a council member still has tremendous influence over issues such as land use and planning, over what gets built and what gets torn down in their own districts. With large staffs, field offices, and the help of the chief legislative analyst, the council is a force to be reckoned with, and its president is the number two politician in the city.

Who Oversees The Day-to-Day Duties of The City?

The Big Works
aka The Dept. and Commissions
The daily work of the city government is carried out by departments, from uniformed services like Police and Fire to the self-financing, “proprietary” Water and Power, Airport, and Port as well as regular departments like Public Works and Recreation and Parks. Each department is run by a general manager who is appointed by the mayor. When we change mayors, that usually means a new set of department heads. Los Angeles has an unusually elaborate system of citizen commissions that sit atop most departments. The majority are advisory commissions, but a few are “managing commissions,” which means that they actually govern the department. For example, the police commission controls the department that is managed by the chief of police. The general manager of Recreation and Parks, by contrast, heads his or her department, which is ad-vised by a citizen commission.

Who Does The Police Chief Report To?

The Minder of the Force
aka the Police Chief
Long the most prominent appointed official in L.A. city government, the chief once had civil service protection—subject to firing only for misconduct—and at times dominated city hall, intimidating elected officials (as did Chief William Parker). But voters changed the rules in 1992 after the civil unrest. Now the chief is subject to the civilian authority of the mayor, the police commission, and the city council.

So, Who Serves As Watchdog?

The Watchdog
aka The City Controller
Charged by voters with looking out for waste, fraud, inefficiency, and abuse in city departments, the city controller’s office received a boost from the 1999 charter reform. The city controller was given the responsibility to conduct “performance audits” of all departments. One of L.A.’s most visible officials, the controller is expected to be a guardian of the taxpayers’ interests but has little power to force change except by using the bully pulpit of well-publicized audits.

What Does The City Attorney Do?

The Legal Eagle
aka the City Attorney
Defender of lawsuits, drafter of ordinances, legal adviser mostly to the city council but also to the mayor and the departments, the city attorney is the city government’s lawyer. Elected by voters to a four-year term, the city attorney can stand up to other elected officials. As L.A.’s chief prosecutor of misdemeanors, the city attorney can get deeply involved in neighborhood problems, from limiting billboards to restricting gatherings of gang members.

Who keeps us off the fiscal cliff?
As the government’s program analyst and budget adviser, the city administrative officer works principally for the mayor (in devising the budget) and for the council (in analyzing it). The CAO’s value to the city government depends on the shared perception by the mayor, the council, and the community that the office’s data and analyses are fair and balanced.

Who runs the county?
The five L.A. County supervisors govern a county with the nation’s largest population, nearly 10 million people. Each member represents roughly 2 million. The county runs social services, including mental health and public hospitals and clinics. The elected sheriff patrols unincorporated county territory and contracts with cities for law enforcement. Because the board has no countywide elected executive, a three-vote majority on the board governs the county.

Power in L.A. is both horizontal and vertical: the mayor faces an elected council, controller, and city attorney and relies on department heads and commissions