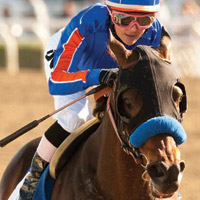 American horse racing’s richest event—the $5 million Breeders’ Cup Classic—returns to Santa Anita on November 2 and 3. If there’s a home turf advantage, Game On Dude, scheduled to run in the weekend’s signature race, has it in spades. While most of the entrants schlep in from points far east, Game On Dude would stroll out of his stall within the storied Bob Baffert training operation and look up to see the familiar San Gabriel Mountains. Nor has the bay gelding lost on this track, including last year’s bumpy victory in the big-money Santa Anita Handicap, when he slammed into the horse next to him, igniting a flurry of boos. While an inquiry exonerated his horse, Baffert was shaken by the vitriol, which he says prompted Dude part-owner Joe Torre to pipe up, “You think this is booing? I’ve been booed by the best of them.” The former Dodger and Yankee manager, who’s been dabbling in racehorse ownership since 2003, says he finds the four-legged athletes as exciting as the two-legged ones, and he goes to as many of Dude’s races as he can. Torre should stand out even in a Cup crowd laced with local celebrities. “He should run for mayor of New York,” says Baffert. “He’d win.”