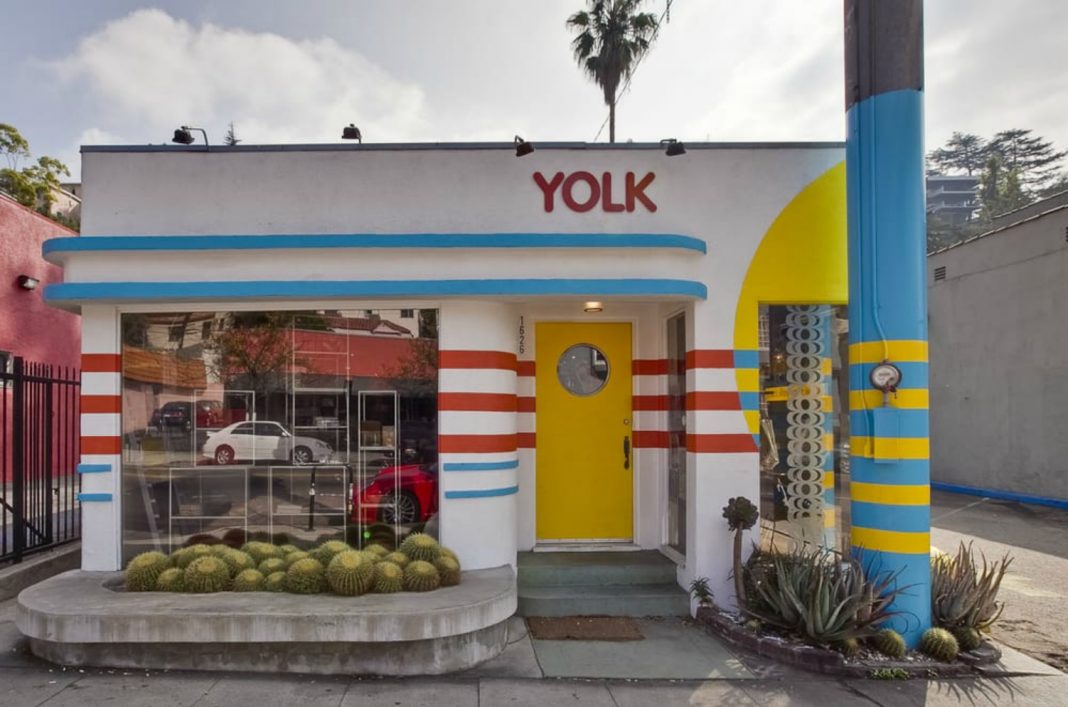 Anup Jogani made his career by finding old, worn, and forgotten gemstones and making them shine again. The Beverly Hills jeweler would scrounge through the piles of jewelry at pawn shops around Los Angeles and refurbish pieces he believed had promise, removing the grime and unfashionable modifications from earlier decades.

Describing the delicate nature of his work, he says, “One mistake on a wheel going 3,000 RPM could mean the loss of hundreds of thousands of dollars.”

In 2018, he turned his attention to bigger projects when he purchased the Streamline Moderne building at 1626 Silver Lake Boulevard. Built in 1937, the structure was once used as an office by renowned structural engineer Eugene Birnbaum and, more recently, was home to gift and housewares store Yolk.

Jogani saw potential in the building—just not as it was. He drew up detailed plans reimagining the 80-year-old structure, excited to make his mark on what he says were his stomping grounds when he was a student at USC.

RIP 1626 Silverlake Blvd. (1937-2019), illegally demolished by new owner. Attached is a photo of their work permit. It mentions an “addition to the office” not a total demolition of one of the last Streamline Moderne storefronts of old Silverlake. The permit lists the contact Camilla Oleivera 415-793-9492. She can be reached to express your concern. This is a slap in the face to the community who just lost a masterpiece building doors away by early industrial design master Walter Dorwin Teague, and directly across the street from the original office of deco and Streamline modern master #williamkesling . . . #silverlake #streamlinemoderne #moderne #deco #oldhollywood #edendale #losangelesarchitecture #historicpreservation #preservation #modernism #illegaldemolition #demolition #crime #hollywoodcrime #1626silverlakeblvd @shopyolk

A post shared by Save Iconic Architecture (@saveiconicarchitecture) on Apr 23, 2019 at 9:38pm PDT

But as soon as the structure came down on Easter Weekend, the neighborhood erupted in protest. The following day, a petition began circulating asking the city to “require the owner to rebuild this iconic structure exactly as it was.” Jogani, the petition points out, did not have a permit to demolish the structure. On top of that, he had not posted a notice 30 days before the action, nor had he fenced in the building after demolition began. He even caught flack on his jewelry business’ Yelp page. The reviews have since been removed, but commenter Darcy L. wrote, “You’ve got egg on your face and the common yolks like us see through your scrambled logic and soft boiled ethics. Shame on you, shame on your family and shame on the mother that bore you.”

The final, most significant censure of Jogani came when Councilmember Mitch O’Farrell issued a public rebuke of Jogani and introduced a motion in the City Council proposing to increase the penalties for unpermitted construction work.

“The new owners of [the building] tore down most of the vintage Streamline Moderne structure in blatant disregard of the community, its history, and in outright ignorance of how important architecture and preservation is in Los Angeles,” O’Farrell said in a statement. “Their actions were unacceptable, beyond thoughtless, and caught everyone by surprise.”

Jogani was also caught by surprise—in his case, by the reaction. “Woah woah woah woah, guys, first of all, there’s so many false reports out there,” he says.

While he admits to exceeding the scope of the remodeling permit, he claims that it was an honest mistake: “It’s my fault in a certain way, that I didn’t put up the plans. We should have just put up a fence and put up the plans.”

He places the blame on miscommunication between his architect and his contractor, who he says believed that an earlier demolition permit for the garage extended to the main structure. He says he has since obtained the correct demolition permit, although a spokesperson for the Los Angeles Department of Building and Safety contradicts this account.

“As of May 8, 2019, the property owner is still going [through] the plan check process and no new permits have been issued,” public information officer Kim Arther wrote in an email.

The Change.org petition and a Curbed LA article seize on a permit filed at the beginning of the year for a “4 story office addition” to an existing one-story office. The petition infers that Jogani intended to replace the existing structure with office space.

While Jogani isn’t sure why the permit includes four stories, he says that the proposed addition was never for the storefront at the center of the controversy, rather for the since-demolished garage in the back, on which Jogani considered adding two, 500-square-foot stories and a viewing deck on top. That plan has since been abandoned.

Most of the outrage, though, has been driven by what Jogani took down, not what he planned on replacing it with. At issue are the competing forces of development and preservation, and who has the power to decide the city’s history.

Jogani says he hopes to turn it into a jewelry and vintage goods store. His plans call for “a beautiful, distressed brick facade with salmon, smooth stucco exterior” and a rooftop garden with “planters all around the top of the roof.” He claims the changes will make the building considerably more energy efficient. He says he’ll also bring the structure into compliance with the Americans with Disabilities Act, making it wheelchair accessible.

One thing the new building will never be? The old, beloved one that was destroyed. “It happens a lot, in terms of these buildings disappearing,” said Adrian Fine Director of Advocacy for the L.A. Conservancy to ABC. “It happens so radically and so quickly in this city as it’s changing that sometimes we don’t take stock of what we care about, what we appreciate, what we love about neighborhoods until they’re gone.”

In theory, Jogani gets why his plans have upset the community, but finds it more difficult to understand why the neighborhood would prefer the stylized Moderne structure to his “Victorian-esque” replacement.

“If I have to let go of a beautiful brick facade, I might. But the unfortunate part is that the front of the building—I hate to be quoted saying this—but it wasn’t exactly pretty,” he says.

RELATED: Will Silver Lake’s 1940s Texaco Be Saved from Demolition?