Home Uncategorized YCETS: Extra, Extra! Hear All About It! 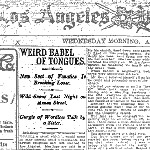 In this exclusive clip, Kunitomi gives us an in-depth look at the exacting process behind creating a newspaper while Lugo discusses the wonders of San Gabriel’s Monster Park