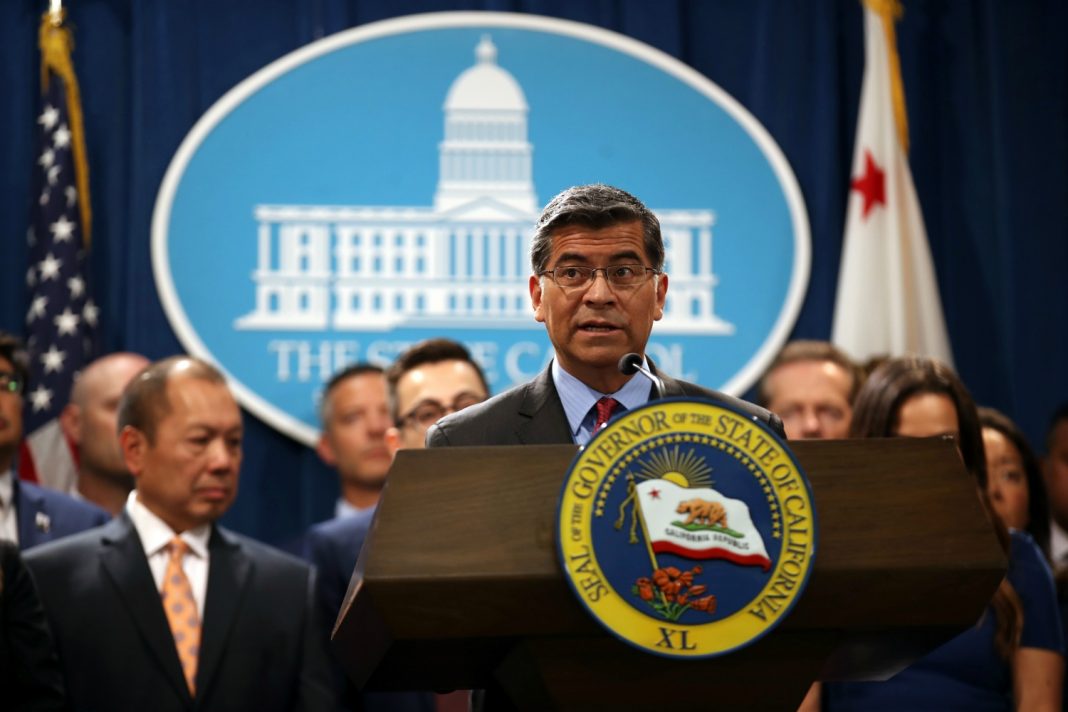 With Neera Tanden withdrawing her nomination to head the Office of Management and Budget, the GOP is channeling its energy toward scuttling Xavier Becerra’s bid to become Health and Human Services secretary, focusing on his four years as California’s attorney general—and playing fast and loose with the actual facts of his tenure.

On Wednesday—the same day that the Senate Finance Committee deadlocked on a vote to advance Becerra’s nomination—conservative group Heritage Action announced a $500,000 campaign opposing Becerra and released two ads aimed at persuading centrist Democrats in Arizona and West Virginia to vote no on President Biden’s pick, The Hill reports.

The West Virginia ad frames the Becerra vote as “a big test for Joe Manchin,” who opposed Tanden’s nomination, with a narrator saying that Becerra “thinks guns are a health crisis and wants to ban them” and “is against coal,” claiming he “tried to ban it from California ports.”

As California’s top cop, Becerra did oversee the state’s Department of Justice in 2020 when it seized firearms, assault rifles, drugs, and thousands of rounds of ammunition as the result of ammunition background checks. Those background checks resulted from the passage of Proposition 63, a voter initiative that was overwhelmingly supported by Californians in 2016.

As for coal, Becerra joined 21 other states in 2019 to sue the Trump administration over its attempt to ease restrictions on coal-burning power plants, and in 2017 he filed suit against the U.S. Department of Interior to challenge its decision to allow coal leasing on public land. In 2018, Becerra sided with Oakland residents who didn’t want a developer transporting coal through a marine terminal that had been a military base.

The Arizona ad, aimed at Democratic Senators Kyrsten Sinema and Mark Kelly, opens with a narrator saying, “Our two Senators can stop one radical nominee,” adding, “Becerra has zero medical experience unless you count suing Catholic nuns, trying to force them to pay for abortions.”

This claim stems from another suit Becerra brought against the Trump administration, opposing efforts to expand religious exemptions for employers who don’t want their insurance plans to pay for contraception. Although Becerra initially made a case against the government, along the way a court allowed a group of nuns called the Little Sisters to intervene as defendants in the case.

As Becerra testified during his hearing last week, “I have never sued a nun—any nuns.”

Republicans are also going after Becerra’s record on the pandemic as well as his history of defending abortion rights.

Thune then asked, “If confirmed, how do you assure us? Because I think the majority of the American people would not want their secretary of Health and Human Services focused or fixated on expanding abortion when we got all of these public health issues to deal with.”

“I understand that Americans have different deeply held beliefs on this particular issue,” Becerra answered. “It’s my job to defend the rights of my state.”

Defending the nominee, Oregon Democrat and Finance Committee Chair Ron Wyden said Republicans are using the pandemic “to peddle misleading or demonstrably false attacks.” He also pointed out that Becerra has promised to follow the law and science when it comes to women’s health.

“Folks have a constitutional right to say that’s a radical position,” Wyden said. “I don’t share that view.”

So far, the Biden administration still has Becerra’s back.

Why is the Term ‘Latinx’ Such a Loser Among Hispanic Voters?

Warning of Trumpism, Biden Tries to Help Newsom Run Up the Score on the Recall