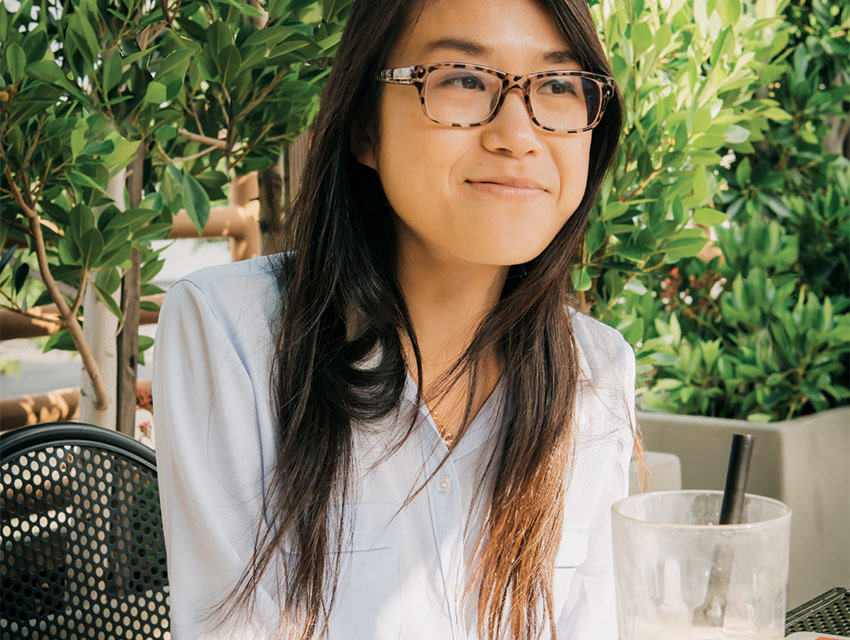 Amy Duan’s first post went out on June 15, 2011. She had only recently learned about Weibo, a Twitter-like microblogging platform that is based in China but used widely among Mandarin and Cantonese speakers in the United States. Duan’s roommate had taken her to Tasty Garden in Alhambra, the first Chinese restaurant she had visited since leaving Shanghai the year before to pursue a master’s in communications at USC. That’s where she met a coterie of other Chinese students who share a common interest. “It was as simple as, ‘Oh, do you like to eat? Are you new to the States? Do you want to join our chihuo group?’ ” says Duan. Chihuo is slang for “foodie” in Mandarin, Duan’s native language. She wanted to let her fellow L.A. greenhorns and restaurant junkies know about what they were missing, so she fired off this Weibo message, written in Chinese: “For my first Weibo tweet I want to talk about one of the first Cantonese restaurants in L.A., Tasty Garden…. It’s opened until 4:00am, a good place for friends to get a late-night meal. Specialties: Almond Shrimp, Curry Pots, and their noodles and porridge are righteous, too.”

Simple as it was, the post received 14 replies and 20 retweets. Four years and nearly 12,000 tweets later, Duan has built one of the most popular food streams/Web sites/social media phenomena for L.A.’s Chinese diaspora and, in the process, landed herself a career.

Duan’s feed—named, appropriately enough, Chihuo (吃货)—has more than 190,000 followers, who may retweet a Chihuo (pronounced sort of like CHEE-hoo-oh) post a few hundred times in a single day. Chihuo’s fans are mostly recent transplants from China (with some from Taiwan and Hong Kong) who want to know where to grab a bite. Duan and her team post about anything that appeals to their stomachs, whether it’s brunch at the Alcove in Los Feliz or a snack they bought at a Korean supermarket or ways to hack a bowl of instant ramen. But given that she writes in Chinese, it’s her insights into Chinese restaurants that drive traffic. “The most popular foods I tweet about are very common Chinese dishes,” says Duan, a 27-year-old with long, straight hair and a way of seeming understated even when she’s in a bright pink dress. “[Non-Chinese people] don’t know about the street food, what we had after school, what we ate every day in China.” Seeking a taste of home, Duan and her Chihuo followers found a community.

The Chinese have scores of proverbs centered on sustenance, going back to Confucius. The word population in Chinese means “human mouths”; a good, secure job is known colloquially as a “metal rice bowl”; and there’s an expression from the Han dynasty—“An emperor’s priority is his people, and the people’s priority is to be fed”—that these days is used to convey, basically, how much Chinese people love to eat.

Duan was passionate enough about restaurants back in China to read the newspaper every Monday for its weekly dining column. She wrote a blog, too, before establishing Chihuo. But never did she think her two hobbies would become a livelihood, which is what happened when Duan resigned from an international marketing company in Torrance last August to work on Chihuo full-time. “Chihuo is my dream job,” Duan says. “I am so lucky that I can make it my career.” She draws a small salary, working ten hours a day, sometimes as many as seven days a week. About ten volunteers scattered around the country assist her (gratis) with graphic design, programming, and reviews. Some are friends from USC. Others began as Chihuo readers. In September Chihuo started a Bay Area edition on Weibo, and by March expanded it to Seattle, New York, Washington, D.C., and Chicago (staffed by one volunteer in each city). Like Twitter, Weibo has a limit of 140 characters, but in Chinese each character represents a word, so that’s a comparatively lengthy 140 words per post. Duan takes advantage of the space to write the way young Chinese people speak—informally, to the point, and with plenty of vernacular expressions and emojis. Of course there are tons of photos, too.

Most fans come to Chihuo for its coverage of the San Gabriel Valley, where Chinese and Chinese Americans make up more than half the population in several cities. The influx began in earnest in the 1970s, when well-heeled immigrants—primarily from Taiwan but also Hong Kong and China—began to settle in Monterey Park, earning it the moniker “Little Taipei.” The growing diaspora muscled its way eastward into San Gabriel, Hacienda Heights, Chino, and Rowland Heights. Eventually those from China would become one of the largest immigrant groups in the nation. By 2010, about 1.71 million people from the mainland were living in the United States, compared with 358,000 from Taiwan, according to the most recent U.S. Census data. Restaurants in the San Gabriel Valley have reflected that shift.

“The food there initially was Taiwanese,” says Yong Chen, a history professor at UC Irvine and the author of the 2014 book Chop Suey, USA, about the history of Chinese food in America. “Over time that changed. Now…almost all of the main regions [in China] are represented in the San Gabriel Valley.” As foreign money floods the area, more and more mom-and-pop restaurants find themselves going up against well-financed chains with origins overseas. Hai Di Lao, a hot pot outfit that offers services like manicures for queuing customers in China (the wait is notorious), opened an Arcadia outpost in 2013. In October the Taiwan-based bakery 85C unveiled its 15th stateside location, in Old Pasadena. Practically next door is a branch of Little Sheep, the hot pot chain founded in Mongolia that Yum! Brands (owner of Pizza Hut and KFC) acquired in 2011. And Bake Code, another Taiwan concern, cut the ribbon in San Gabriel this past April.

“The restaurants I went to four years ago,” says Duan, “people would tell me that they were famous. Those places have all closed.” It’s cutthroat, but that’s also what makes the San Gabriel Valley so compelling to her. “The L.A. area,” she says, “has the most competitive Chinese-food scene in America.”

Duan makes no claim to be a connoisseur of every variety of Chinese cuisine, but she is a student of all things fiery. Lately she has been clocking time eating Sichuan cuisine, the indisputable regional style of the moment. There’s been an explosion of restaurants in the San Gabriel Valley specializing in it after the success of Chengdu Taste, the spot on Valley Boulevard in Alhambra with a perpetual swarm of people lined up outside. Duan wants to tap into that interest.

On an early afternoon about 20 miles east of downtown, I meet her in Rowland Heights at a Sichuan restaurant called Qiwei Kitchen (a name that works less well when translated from Chinese: “curious taste”). The restaurant, a Grand Opening banner still flapping over the doorway, specializes in “dry pot”—a stir-fry consisting of a meat (including frog and rabbit), veggies and herbs (bean sprouts, cilantro), plus whatever else is available (one dry pot features Spam)—prepared in the signature spicy Sichuan flavor known as mala. Think hot pot minus the broth. In places like Chongqing and Sichuan, it’s a dish of convenience most moms can make. Qiwei Kitchen has invited Duan for a sampling. Usually she tries to dine anonymously. When she’s asked to visit a restaurant, she discloses as much in the write-up and brings along other people for their take.

This time around she’s accompanied by two Chihuo readers who won a contest in which followers were asked to write a brief pitch on why Duan should dine with them. One of the winners, Millie Chen, a voluble mother of two kids, earned her place because she knows Wuhan food, which Qiwei Kitchen serves, too. Since moving with her family to the United States from Wuhan two years ago, Chen has come to rely on Chihuo to help navigate her adopted home. “We don’t know anything about Chinese restaurants here and had no idea where to go,” she tells me as plates arrive. “Chihuo makes it easier for us. The reviews are pertinent and pretty well written.” The other winner (she asked to remain anonymous) is a Sichuan-born twentysomething who boasts of having tried every restaurant in Rowland Heights.

As with other Chihuo readers, they’re not just young but Web savvy and financially comfortable, unlike first-generation Chinese immigrants of yore. Duan also gets a lot of attention from the hundreds of thousands of tourists and foreign students from China who visit the L.A. area. L.A. sees more tourists from China than any other country, and they’re hungry to explore. “They get out of the car, they go to things, they want to have experiences,” says Clayton Dube, executive director of the U.S.-China Institute at USC and a longtime China observer. Traditional Chinese media, such as radio stations and newspapers, have a different—well, stodgier—sensibility, geared more to “older immigrants,” Dube says. The newer generation wants to be catered to, which presents an attractive market opportunity. If Chihuo has a Chinese-language competitor, it’s WaCowLA, a Web site and free monthly magazine (“WaCow,” a slang term that originated in Taiwan, translates to “holy fuck” in Mandarin) focusing on grub, shopping, and pop culture (it has offshoots in New York and San Francisco as well).

In between bites at Qiwei Kitchen, Duan and her guests lob questions at one another: Is the fish fresh? (“Yes,” they all agree.) Is the spiciness too one-note? (“No, it has a nice complexity to it,” says Duan.) Is the re gan mian—a common breakfast noodle served with sesame paste in Wuhan—authentic? (“Not quite,” Chen, the Chihuo reader says, but it exceeds her expectations.) How about the preserved duck tongues? (They could be spicier). At the end of the meal Duan tells the pair to e-mail her what they think of the dishes; she’ll wind up quoting them in the review.

Duan says Chihuo is breaking even, without elaborating on the numbers. Most of its revenue comes from ad sales, with sponsorship from local businesses making up the rest. In March she launched a simplified Chinese-based Web site (the-chihuo.com) offering restaurant news, recipes, things to do, and better photography. The reviews, though, remain bite-size, since about 70 percent of Chihuo traffic is via smartphone. “In the beginning they were much longer. But…our culture is so much about instant gratification. Our readers—even me—want to know what’s good right off the bat,” says Duan, who plans to publish a Chinese-restaurant ranking by year’s end.

Naturally in a multiplatform world, she doesn’t want to stop there. Duan is launching a smartphone app in June, and she is staging events through Chihuo. For China’s so-called Singles’ Day, on November 11, Chihuo organized a speed-dating event at a café in the City of Industry. Eventually she wants to organize a street festival à la 626 Night Market, the popular outdoor Chinese-food fair that started in 2012 in Arcadia before expanding to downtown Los Angeles and Costa Mesa. But first Duan has set her sights on creating an English version of the Web site. Which is to say, she is working all angles to become the last word on Chinese food.