Home Politics In the Wake of a Blue Wave, Can Women’s March L.A. Keep... 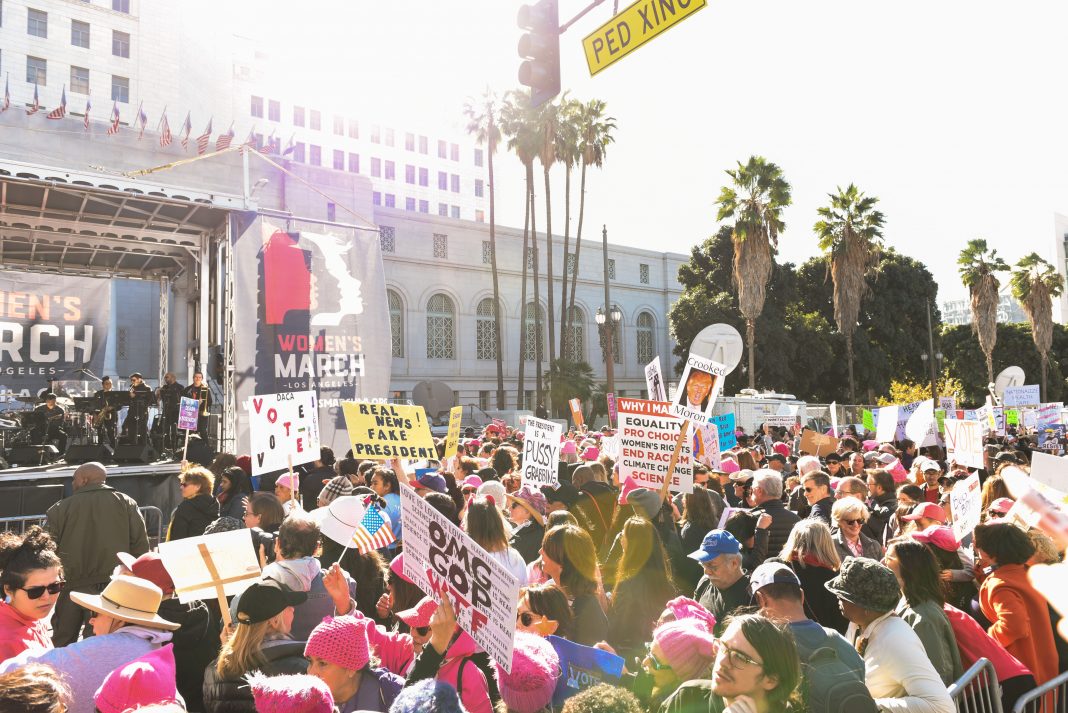 In January 2018, when Women’s March Los Angeles returned to the streets of downtown for a second year of rousing speeches, feminist chants, and punny protest signs, its mission was clear. It was the start of a midterm-election year, and the event’s organizers selected the theme “First We March, Then We Vote,” building on a collective anxiety around Donald Trump’s presidency to encourage more voters to show up at the polls and to drive more women to run for office.

“Energizing the second year into midterms was key [to Democratic victories in November],” says Emiliana Guereca, founder and executive director of Women’s March L.A. “We’ve had a lot of candidates say that most of their volunteers were Women’s March organizers.” Women were elected to Congress in historic numbers in November, including the body’s first two Muslim women—Ilhan Omar of Minnesota and Rashida Tlaib of Michigan—as well as millennials like New York’s Alexandria Ocasio-Cortez and California’s Katie Hill.

But amid the flurry of good news this year, women in leadership at the national Women’s March organization in Washington, D.C., were scrutinized for their ties to Nation of Islam leader Louis Farrakhan (WMLA was quick to clarify that the individuals in question are not directly associated with the L.A. organization). Well before that scandal, many people who’d marched in 2017 boycotted the 2018 marches for their perceived lack of intersectionality and the concern that they were demonstrations by and for white, cisgender, heterosexual feminists.

In the lead up to this year’s march—which will be held January 19—Guereca and her fellow organizers had to decide how the event could remain relevant, and that meant establishing an overarching message that would resonate. The theme they decided on is “Truth to Power.” “For us, ‘Truth to Power’ is holding those who are put in office accountable,” Guereca says.

Guereca has been part of the Women’s March movement since the beginning. Besides founding the L.A. organization, she also launched Women’s March California. Guereca initiated the L.A. event the day after the 2016 election. “I saw that someone was organizing the Washington, D.C., march and I could’ve potentially traveled to D.C.,” she says, “but I decided that L.A. needed its own show of democracy, its own march.”

Her instincts were right; the L.A. march has consistently drawn a massive number of people to downtown. “Last year we were around 600,000 [people],” Guereca says (exact attendance was hard to pin down both years). “We’re hoping we can be around the same this year.”

The lineup of January’s march has yet to be announced, but Guereca says she and her fellow organizers have taken steps to make the event more intersectional. She stresses that every decision the organizers make traces back to their Unity Principles, an outline of the vision for an inclusive, fair, and representative government for all people. While the organizers attempt to include a wide array of diverse voices in the event’s program, they recognize that there are always going to be limitations. “The program is only so long, and we cannot put everyone on stage,” Guereca says. “Not everybody is going to be happy. But at the end of the day, we have to make sure we focus on our Unity Principles. I think if we are working with our Unity Principles then we’ve done our job.”

While some strides (pun intended) have been made since the inaugural event, there’s still a lot of work to do—work that extends beyond marching one day a year. “We don’t want people to just march and go home and that’s it,” Guereca says. “We want to make sure that they’re plugging into civic engagement. That’s key.”

Leading by example, the women of WMLA stay busy year-round, registering voters and hosting training sessions to guide those who are unsure of what exactly to do next with that power. At these meetings, they aim to educate the public on how civic engagement affects women and youth specifically. It doesn’t stop there: WMLA also partners and helps other organizations and causes, such as March for Our Lives, Time’s Up, and the Cancel Kavanaugh campaign.

With (at least) two years left of President Donald Trump, WMLA continues to offer a glimmer of light in dark times.

“I felt hopeful after the first march,” Guereca says. “I felt like, OK, if we can get all of these people in the streets and we can get them to vote, we’re gonna be OK. If we continue on [this] trajectory, our government will start to look like what our society looks like.”

RELATED: In Honor of International Women’s Day, a Look Back at the Faces of the Women’s March