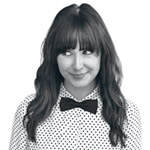 What is this thing?
First came the dandy look for men, then menswear-for-women caught on. Think of the bow tie as the final stop in the Lady Looks Like a Dude trend.

Who’s thinging it?
Karl Lagerfeld refreshed the accessory in 2006; Diane Kruger made like Dietrich a few years later. Now it’s being worn by hipsters for extra punch.

Is it my thing?
Probably not. The Redenbacher routine has to spell the end of the menswear fad. The only place left to go is the fuzzy upper lip. The idea might grow on you.