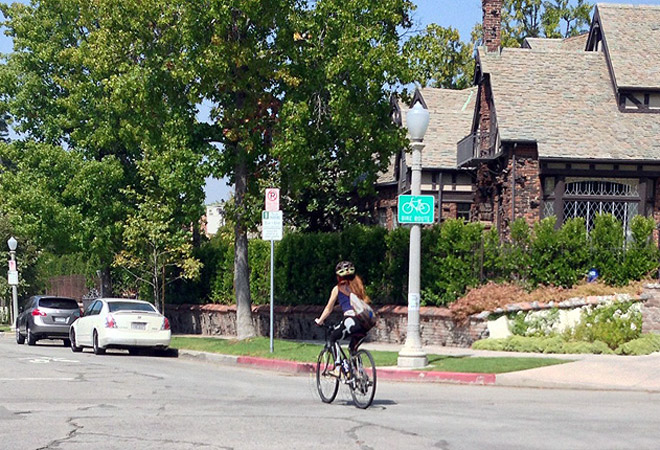 As much as we love L.A., we have our bones to pick. One of the biggest: how our city’s weakest streets turn simple drives into commuter hell—for drivers, yes, but for bikers, too. The fact is despite MyLA 311 and Garcetti’s efforts to make the city more bike friendly, there are still a lot of factors that make local streets difficult to navigate on two wheels. From uneven pavement and potholes to the lack of bike lanes, single lane roads, heavy bus traffic, and speeding or haphazard drivers, it’s hard to find a perfectly smooth path to ride. To raise awareness—or hey, help improve your own experience—we hopped on to our single speed road bike, took detailed notes, and logged the worst L.A. streets to bike over the last few months.

Here’s what we found:

La Brea Ave, between Melrose Ave. and Rodeo Rd.: While a great connector for some, La Brea is a north/south highway that drivers enjoy plowing through, which means bikers often get pushed off-road. Uneven pavement (I’ve gotten four flats on the avenue) and the dreaded morning and evening rush hour/no parking zones enable drivers to think they can drive in all lanes at all times. La Brea can be a hilly bitch, too.
Alternative: Redondo at Olympic Blvd. through Jefferson Blvd. and Gardner St./Vista St. are quaint, safe rides that are fairly flat.

Sunset Blvd., West of Western Ave.: This rush hour favorite is sometimes a highway and sometimes a catwalk, a stage for flippant drivers to show off. There is a lack of care for bikers on this road despite its being fairly well paved. Numerous big intersections and the occasional highway off-ramp make speedy, hasty turns by drivers an issue for bikers.
Alternative: Hollywood Blvd. lacks a rush hour lane and clean highway off-ramps. Fountain Ave. can be suitable, too.

Hollywood Blvd., from Laurel Canyon to Wilton Pl.: At points a safer alternative to Sunset, Hollywood is where careless speedy driving (from Laurel to La Brea), hasty pedestrian activity (from La Brea to Gower), and haphazard, intermittent construction, thanks to awards shows and the like, merge. Surprisingly, the biggest threat to bikers here is drivers swinging their car doors open when they’re parked. I’ve been door-ed here twice—and one of the incidents required a police report.
Alternative: Again, Fountain is okay.

Pico Blvd., between La Cienega Blvd. and Overland Ave.: While this speedy connector is great for drivers, it can be a surprising hell for bikers. It’s inconsistent surface and annoyingly, long, “IS IT OVER YET??” hills will make you want to die or get a harder workout. But who wants to arrive to a destination smelly and wet?
Alternative: Venice Blvd. (if heading west) and Washington Blvd. (if headed east) are bike friendly roads. Venice is a great ride to Santa Monica while Washington is the same for Downtown. The road can be inconsistent but drivers do not mess with bikers here. While it does not run parallel to Pico, Motor Ave. is always a delight to spin through, too.

Fairfax Ave., between Franklin Ave. and Venice Blvd.: Is there a more cramped and potholed street in Los Angeles? Plus, slim sections like Fairfax District and Little Ethiopia are notoriously filled with angry drivers and door openings.
Alternative: North Crescent Heights, below Santa Monica Blvd., can be delightful and very, very clear.

7th St. between Figueroa Blvd. and Alameda Ave.: You would think because 7th St. has a bike lane that it would be delightful. But why have a bike lane when it is barely paved? We’re splitting hairs, yes, but this frustrating strip—specifically from Figueroa to Alameda—is uneven and frequented by giant buses battling for space.
Alternative: While seemingly contrarian, East 2nd St. and its new intermittent bike lane can be quite nice.

Glendale/Hyperion/Rowena: There is no easy way to get to Atwater Village, Glendale, or Glassell Park/Eagle Rock by bike. You have to incur small, hilly streets and great non-highway connectors that drivers love to speed through. The H shaped Glendale/Hyperion/Rowena strip features uneven roads that drivers rush through amidst construction and haywire intersections. Have you biked the Glendale-Hyperion Bridge? It’s a nightmare. Isn’t getting any better either…
Alternative: Unfortunately, there really is not a better route since Los Feliz Blvd. is too fast and Silver Lake Blvd. feeds into Glendale. Both are hilly, too.

Fountain Ave. between La Cienega Blvd. and Vine St.: Like 7th St., this “bike friendly road” is everyone’s favorite shortcut, AKA where you can speed and drive crazy without getting caught. If there aren’t fast driving cars, there are tight single lanes and parked cars to give bikers headaches. The street’s awkward split around Joseph Le Conte Middle School adds to the mess.
Alternative: Heading west, Oakwood and Willoughby avenues are quieter with more space for you to travel.

It’s Toss Up: Wilshire Blvd.
If you’ve spoken to a biker about L.A.’s worst streets for cyclists, Wilshire Blvd. has probably come up—but it is such a great connector. If you can deal with some poor paving and minor hills, the street can be a blessing. Be sure to pack an extra tube though; the road is uneven.

Rides Worth Celebrating: Chandler Bikeway & The Los Angeles River Bike Path
Want to know what a good bike path looks like? Here are two. They are easily the best in Los Angeles and, while more for recreational biking than commuting, every biker should give them a spin.

For more on biking in Los Angeles, you can join the Los Angeles Bicycle Coalition and find maps from the LADOT. The Google Maps App provides decent bike paths and Metro routes too but can be flawed: always use your judgement in terms of riding safely.

Note: sidewalks are not included in this list as sidebiking is dangerous to pedestrians and illegal in some parts of town.