Home Urban Development A Big Rent Hike Could Spell the End of a Beloved Venice... 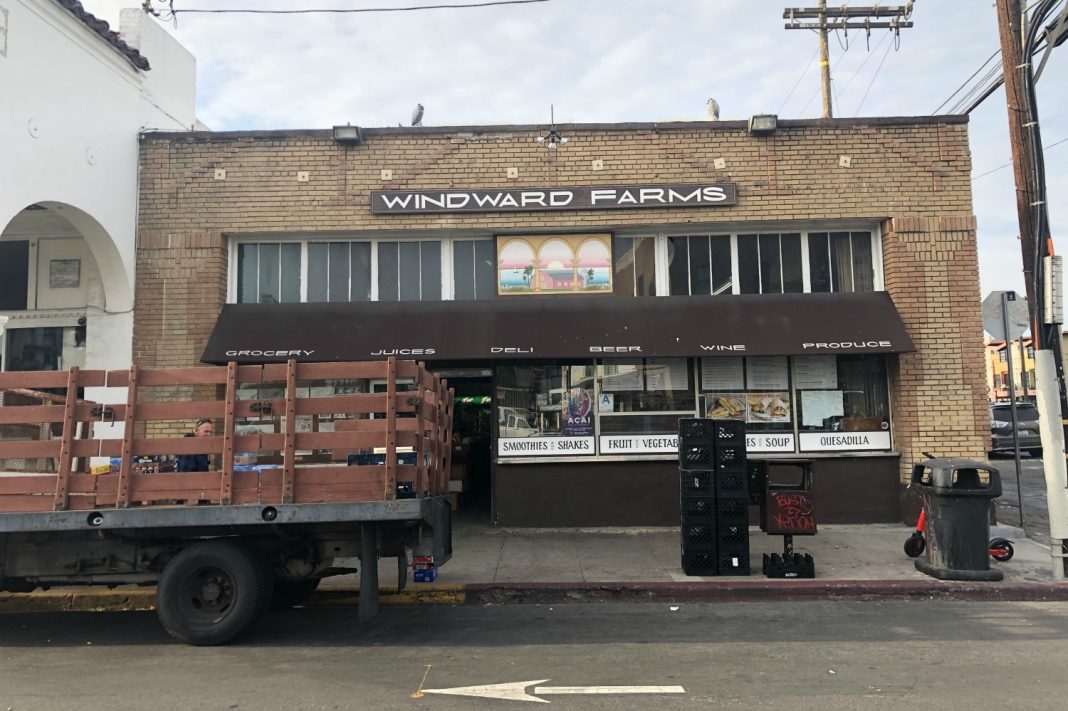 Venice Beach’s Windward Farms seemed certain to close when, in October, the building’s landlord informed owner John Shin that his rent would be increasing 120 percent in just 60 days. The mom-and-pop market and deli, one of a dwindling number of places to grab affordable food in the neighborhood, was set to shutter on October 31, but community outcry has kept the market open as Shin searches for a buyer that can withstand the rent increase.

On the Monday before what was supposed to be the market’s last day, local organizer Krysta Ohle and others gathered outside the market holding signs that read “Greed Ruined Venice!” and “R.I.P. Windward Farms.” Krysta Ohle, a longtime Venice and Mar Vista resident who helped organize the demonstration, says about 25 people showed up for the event with its “super local vibes.”

“We wanted to do a community gathering to show the staff at Windward Farms how loved it is and that there still is Venice grit and pride,” Ohle says. “There still are people here who give a damn about the community.”

Shin has credited the protestwith helping to buy him some time with the building’s landlord, Venice property owner Mona Roger Webster. The market, which has been in business for 28 years, has weathered Venice’s transformation from a haven for skaters and stoners to one of the most expensive neighborhoods in Los Angeles. As seen in historical photos on the storefront, the space at 105 Windward Avenue has been a market in some form since the 1920s, when it was named Ritz Market.

Webster, who declined to comment, reportedly made an effort to keep the market’s rent low for years, but property values have continued to skyrocket since Snapchat was founded there in 2011. After the startup decamped to Santa Monica and tourism foot traffic stagnated, Shin says revenue at the market has declined. “Now that Snapchat and everything has moved out, it’s like, ‘What do we do now?’ What is this?’”

Shin says he isn’t sure what the future of Windward Farms looks like, and even though he understands the rent increase—given the rising property values—he still feels uneasy about the future of the area. “I don’t know the state of where Venice is going,” Shin says. “It was predictable up until this point and there are too many issues for me now to want to spend that much time to make very little money if [the landlord is] taking that much more of it.” Nevertheless, he still hopes the market can continue to serve longtime customers, like Erik White.

“It sucks right here for Venice, dude. This isn’t fucking Santa Monica,” says White, a 31-year-old artist who’s lived in the area for close to a decade and considers himself a Windward Farms regular. While eating a burrito, he laments that gentrification has caused Venice to lose the authentic, grungy vibe that’s drawn people from around the world.

“They took everything away that was cool. Now no one can roll up blunts, say what’s up to the homies,” White complains. Directing his comments to gentrifiers, he says: “Let this part be. You can have Abbot Kinney. Put all of that on the street named after an old white man.”

RELATED: Is This the End of Venice Beach as We Know It?

Inside the World of Venice Beach’s Legendary Basketball Courts