Home Urban Development Will Slow and Steady Progress Add Up for Eric Garcetti? 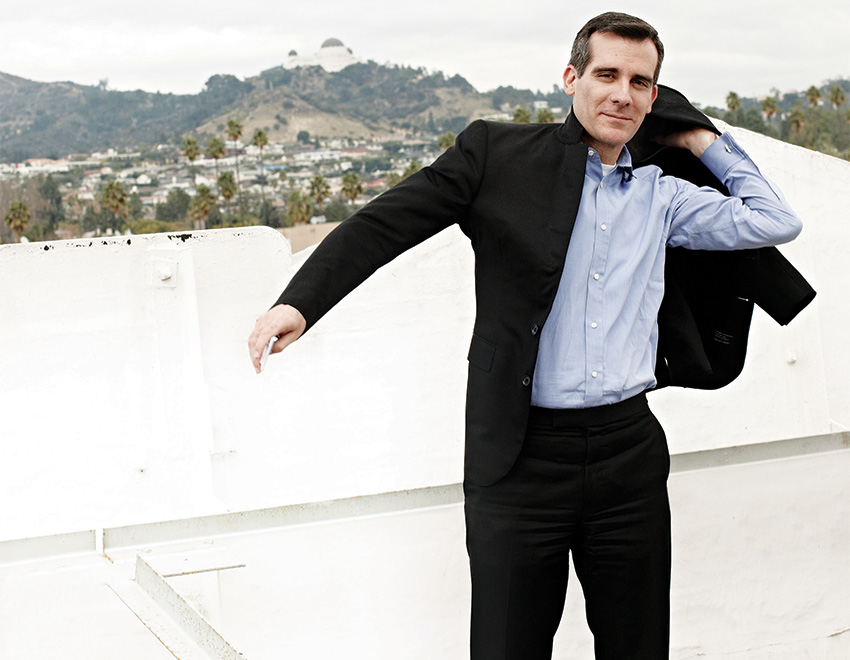 During the past couple of decades, I have watched Eric Garcetti up close, both as a journalist and as a family friend. I first interviewed his father, Gil Garcetti, in the 1990s when he was district attorney, his tenure marked by the melodrama of the O.J. Simpson prosecution, which I observed as a commentator for NBC. My late husband, Karl, and I subsequently had meals with Gil and his wife, Sukey—amusing, noisy, opinionated evenings. We talked a lot about the city and our love for it while we also bemoaned its flaws. Occasionally Eric would be there. He was a very good listener, smart without being argumentative. It was obvious early on that he was going to follow his father into public service.

There was always an earnestness about him, but he was also fun—an unusual combination.

Now 43, Eric is the composed Gen X poster boy, a kind of calm counterpoint to his elders, those needy baby boomers. He moves easily through the city’s mind, radiating discipline without being prissy or cold. He is quick to touch a stranger or embrace a friend. There is an apparent irreverence, as when he dropped the F-bomb at a rally celebrating the Kings’ Stanley Cup victory. That moment might have been a one-off, though it’s amusing to ponder whether something similar might bubble up again.

While we wait for that—and on some level, hope for it—clearly Garcetti offers a respite from the showboating tenure of his predecessor, Antonio Villaraigosa. Slick and dapper, the latter was a headline grabber, courting attention at every turn. That was part of his shtick and admittedly part of his eager charm. He had the pol swagger and the playboy appetites of Bill Clinton without the intellectual depth of the former president. Garcetti, on the other hand, has the mental acuity of Clinton—highly educated, they were both Rhodes scholars at Oxford—without the messy and self-destructive side.

So what has he done with all his gifts, our shiny new mayor? His critics say he’s played it safe, too safe. His cautiousness has held him back. That’s the gist of quite a few postmortems on his first year. What does he stand for? What is his vision? I hear that from his supporters as well. They want more: the big speech, the big plan to ease our income inequality, the big push to mend the schools, the big solution to the maddening traffic. Even Villaraigosa, they opine, put his mayoral muscle into a two-year fight to take over the Los Angeles Unified School District (which a lot of Angelenos think was a good idea). He was unsuccessful, but he receives a certain credit for the boldness of the attempt.

Garcetti, meanwhile, has mostly been hard at work in the civic trenches: modernizing the bureaucracy; firing department heads; making sure City Hall gets up to speed technologically; reducing the wait time for callers who are put on hold when dialing 311, the line for reporting illegal dumping, graffiti, and the like; relaxing parking rules and refunding money to those who were ticketed inappropriately. While these actions have engendered great goodwill, no question, one could also grimace at the seeming modesty of the mayor’s priorities—and wish for his reach to be courageous. I have done that myself, scrutinizing him during this maiden stretch. He has left my native heart clamoring for the guy on the white horse to tackle the maladies of the metropolis.

I have come to the conclusion that I am wrong, just as Garcetti’s critics are blind to his successes. I see how his approach to governing is a version of the way William Bratton practiced policing: You fix the small stuff first—the broken-windows approach to crime prevention. The thinking, as first presented by social scientists James Q. Wilson and George L. Kelling in 1982, is that if you don’t repair the broken windows, bad guys will come along and break more. Similarly if you don’t remove the graffiti right away, more scrawlers and taggers and would-be artists (with apologies to Banksy) will hop on the bandwagon, and your bridges and buildings will soon be covered. In short, if you let the little problems get out of hand, you signal to the vandals and criminals that you are not on the case, and major crime will follow. You lose control, one broken window and one defaced wall at a time.

It appears that our mayor is working along those lines, dealing with what could be categorized as minutiae even as he suffers the slings and arrows from impatient citizens. He’s addressing the city at its base rather than throwing out a huge initiative destined to alienate many. It’s not the sexy, attention-eliciting way to go, this focus on the mechanics first. Once you have the troops in order, though, you can make a play for the tougher fixes. Call it the trickle-up theory of leadership.

Of course the question looms: Will he take on the larger issues? Or is he by disposition so risk averse that he won’t have at the schools or the pensions? There is a people-pleasing quality to Eric Garcetti, which is what makes him appealing to be around. He doesn’t have the tough-guy edges of Chicago mayor Rahm Emanuel. Do you need a gritty bravado for the meaner, more intractable problems? For an elected official as young and gifted as Garcetti, there is also the inevitable political calculation, the desire not to make enemies in order to maintain one’s electoral viability for the next office—senator, governor (yes, maybe even president). He did throw his weight behind the $1 billion plan to rehabilitate an 11-mile portion of the Los Angeles River. That was gutsy but relatively safe—another one of those quality-of-life issues, like his advocacy for a more bike-friendly L.A. In fairness he’s decisively vocalized his support for raising the minimum wage to $13.25 by 2017. And as thousands of underage immigrants were spilling over the border, he vowed that the city would help provide shelter for them. “Before you get partisan, before you tell me where you are on immigration—these are children,” he said.

That’s a good tone, a human one, the remark of a parent (he has a daughter) rather than a politician. It doesn’t come off as a favor-currying sound bite or, should I say, tweet. The topic of immigration brings up another politician who towers as a point of comparison for our mayor. There is the fear that Garcetti could be in danger of becoming an Obama, who has slid badly in the polls and the country’s affections. For a growing number Obama has not lived up to the hope and hype surrounding him in the early days. The rap is that he has generally been too careful, too defensive, unwilling to get his hands dirty and stand up for what he believes—the same critique that Garcetti has earned in a few quarters.

But there is a substantial difference in temperament, as far as I have seen. Obama’s persona is marked by a definite arrogance (an armor against all the attacks he has encountered from day one in office), which he has tended to flaunt and hide behind. Garcetti exudes a self-confidence without the flare of ego, and he seems to be more at ease—even happy—out among the voters.

All we can desire is that once the metaphoric windows are repaired—and the potholes filled—he will turn his considerable skills to our deeper problems. He’ll need to find the right balance. You must stick your neck out to be a leader. The question is, When and how far and for what?

We will wait to see—but we cannot wait forever.