The fatal flaw of the California dream has always been that fantasy is frequently mistaken for reality. It’s a natural consequence of allowing generations of grifters to market the state as the new Eden, but with oranges instead of apples. And yet even California’s dark side has allure: cataclysmic earthquakes adapted by Universal Studios, femme fatale housewives, bestial cults affiliated with lesser Beach Boys. Most of all, there has always loomed the cleansing promise and obliterating threat of fire.

California may seem like paradise, but Paradise burned in the fall of 2018, the most lethal inferno in the state’s history. It claimed 85 lives, incinerated two whole Northern California towns, and caused $16.5 billion worth of damage. Only two years later, during the last days of August, there were 560 wildfires simultaneously raging, displacing over 100,000 people and devouring swaths of terrain larger than Rhode Island. Until now, the only positive about a year characterized by death and division was that it temporarily allayed the anxiety over climate change. But that was swiftly altered by freak lightning strikes that ignited wildfires everywhere from Big Sur to the Napa Valley.

Southern California was temporarily spared, but our wildfire season doesn’t begin until the Santa Anas haunt the canyons each autumn. Joan Didion claimed that the city burning is Los Angeles’s most vivid image of itself, but that was a poetic misrepresentation, the graceful but empty aphorism of the non-native whose bags are perpetually packed. From second- or third-generation Angelenos down to those whose clans descend from Sepulveda, fire isn’t the reflection of Los Angeles but, rather, its shadow, in the Jungian sense—an unwanted reminder of the natural and existential consequences that it has historically attempted to ignore. It is the big payback for the redlining and police brutality that eventually turned the city to cinders in 1965 and 1992. It is the hidden cost of the county’s contracts with the devil, giving developers free rein to build generic fortresses inside any available canyon—even those directly adjacent to ready-made conflagrations of coastal live oak and chaparral. It is a reminder that hopes rarely align with what actually happens, and that all time in the sun eventually yields to death. It is an ecological settling of scores in which even a $10 million Malibu mansion can become toast.

In Southern California, the Tongva tribe, the tragic victims of a twin Spanish and Anglo genocide, are finally getting justice. The region’s first missionaries outlawed the controlled burns that would have allowed the land’s indigenous people to survive despite the constant menace posed by even a faint spark. In the twentieth century, fire suppression at all costs became the operative policy, the mindset of colonialists who believed that nature was merely another obstacle to be demolished. But the ominous peril remained.

It’s true that prescriptive burns have returned to prominence. But there remain homeowners terrified of runaway fire and tar-colored hillsides—a blight on real estate value. And then there are the inimical utility companies, like PG&E, whose perennial neglect led to the wildfires of 2017 and 2018.

There is the sickening understanding that the fires now exist in a different dimension—the old prophecies of a ruined future finally devolving into a deranged present.

Until the last several years, there was a prevailing sensibility in Southern California that fires were almost exclusively the calamities of extreme wealth, a misfortune that happened to those able to afford luxurious glass aeries in canyons largely unseen by those in the flatlands. But as easy and satisfying as it is to dunk on the rich, there is also the obvious fact that this is the great reckoning of the California dream. In 2007, the Griffith Park wildfire ravaged almost all of the city’s most sacred greenspace. The arcadian ideal of living amidst natural splendor just 15 minutes from the beach has become increasingly untenable. A native who might have once dreamed of disappearing forever into the permanent Aquarius of Topanga Canyon now has to contend with the reality that Topanga Canyon won’t exist in 20 years or less.

There is something that feels different this time. It is, of course, reflective of the decline of American civilization, the runaway death rate from COVID-19, the erosion of civil discourse, the Q death cult and its dear leader, a president whose petty vengefulness knows no bounds. Until recently, there was the understanding that no matter who occupied the Oval Office, FEMA would at least shoulder the financial burdens incurred by these yearly holocausts. Now there is a dim lobsterhead demagogue who smirks at those amid their most obscene suffering and scolds them to do a better job of sweeping the forest floors. 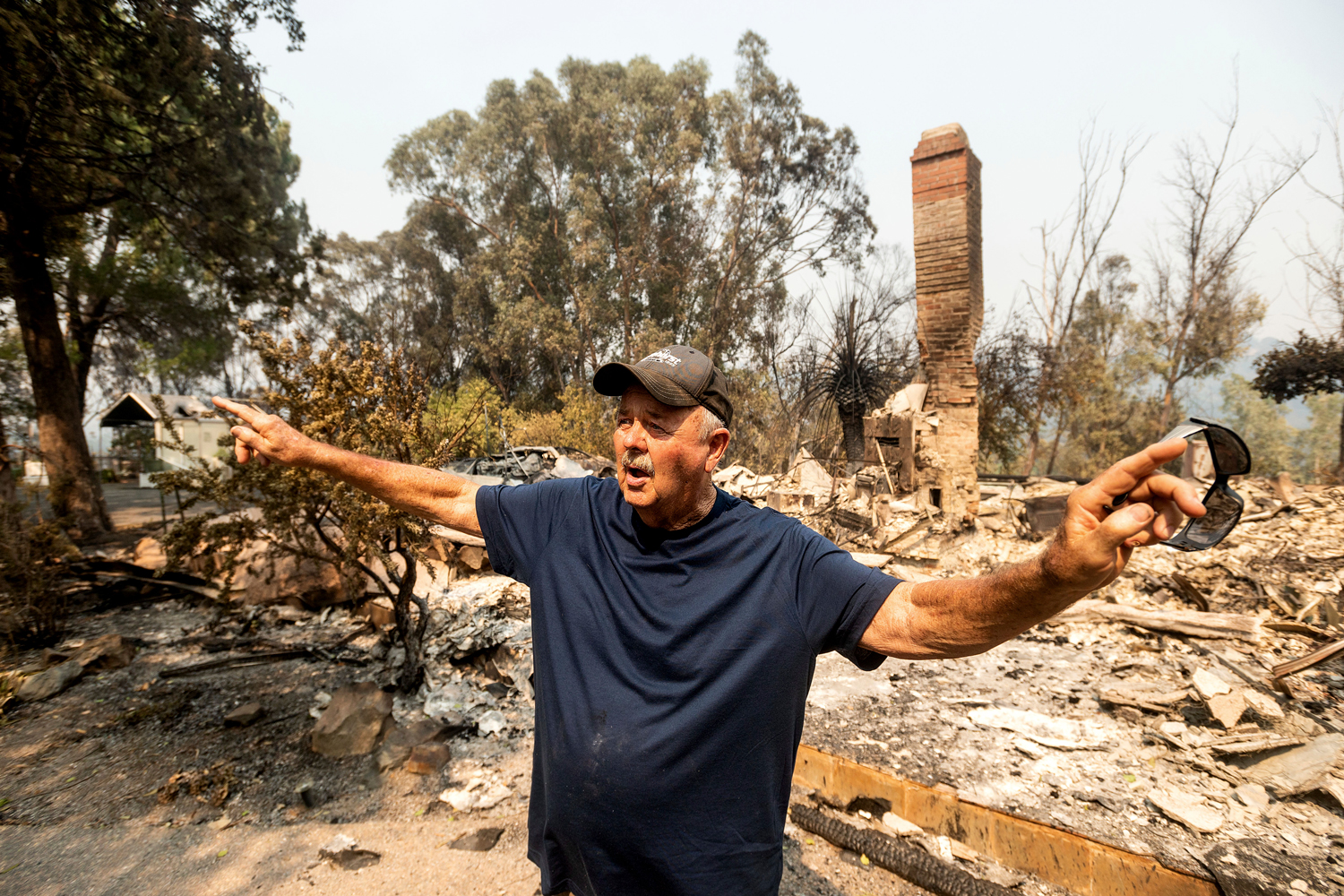 There is the sickening understanding that the fires now exist in a different dimension—the old prophecies of a ruined future finally devolving into a deranged present. A state of permanent unrest where conservatives valorize a teen vigilante who crossed state lines to murder two protesters. The state’s three worst wildfires have all occurred over the last three years. In just a single week this past August, more than half a million acres turned to cinders—roughly twice the land scorched during all of last year’s fire season. The warming of the earth coupled with the preponderance of fluke weather events has turned California into a Gehenna with better waves and rap music. Everything is revealed in that viral photo of a senior center engulfed in flames, just behind a sign advising handwashing, social distancing, and masks; it is the shadow finally slinking out of the darkness.

In the here and now, fire season has not begun in Los Angeles, but it’s obvious how it will end.

RELATED: Wildfire Season Is Projected to Be Bad This Year. Here’s How to Prepare