It’s been six weeks since the National Enquirer published intimate texts between former newscaster Lauren Sanchez and Amazon CEO Jeff Bezos. If not for their treacly content, the texts were notable, a. Because both parties were very much married (Sanchez to William Morris Endeavor co-CEO Patrick Whitesell and Bezos to MacKenzie, his wife of 25 years), and b. Because Bezos just happens to be the richest man in the world.

Since the leak, the $64 billion question has been how the Enquirer got its grubby mitts on those texts, not to mention the salacious selfies that became the subject of Bezos’s now-infamous blog post. Suspecting the leak may have been politically motivated, Bezos is so eager to find out he enlisted top Hollywood sleuth Gavin de Becker to get to the bottom of it. The first suspect to emerge? Lauren Sanchez’s own brother Michael Sanchez, a gay, Republican, Hollywood wannabe who’s pretty damn fascinating in his own right. Here are 13 things you should know about Michael Sanchez—if only for water cooler purposes.

In a letter to the editor of the L.A. Times the former Democrat referred to himself as “a gay man, a Hispanic, a West Hollywood homeowner and strong supporter of Trump.” He also counseled Bezos and his sister about keeping their relationship secret while allegedly doling icky info about them to the National Enquirer.

He has some unsavory friends.

He’s very chummy with Roger Stone, the “dirty trickster” who was recently arrested for lying to Congress and witness tampering. Another pal is Carter Page, the addled businessman whose strange interactions with Russian spies drew the attention of the FBI. He’s also a longtime buddy—and allegedly a longtime source—of smarmy National Enquirer editor Dylan Howard, who shared a byline on the tabloid’s original Bezos expose and later authored the shakedown email that was sent to Bezos’s lawyer. According to the Los Angeles Times he has been an Enquirer contributor since 2005.

He and sister Lauren have different memories of their childhood.

“We came from nothing,” Lauren Sanchez once told the Hollywood Reporter about the hardscrabble upbringing she and her siblings endured in Albuquerque, New Mexico. Lauren reported that as a child, she slept in the backseat of her grandma’s car while she cleaned houses. Michael recalls things differently. He’s told friends that he’s he had a privileged childhood. His grandmother, Elsie, owned a chic New Mexico restaurant frequented by celebrities and supplemented her income as a bookie. The other Sanchez sister is rarely talked about. Elena Sanchez Blair, a photographer, lives a quiet life in Seattle with her husband. Unlike her siblings, she assiduously avoids the press.

Michael has served as Lauren’s publicist and manager, as well as her best friend.

Sanchez has represented Lauren since her days as a local anchor, sending out a press release announcing the birth of her first baby. He claims he doled out some wise PR advice to Lauren and Jeff before news of their affair went public. “My advice was, let’s get to the other side. Our analogy was always that they were landing a 747. I told them, ‘You’re both pilots and you’ve never landed a 747, but that’s what we’re trying to do here.’”

His husband works in retail.

Sanchez married his longtime partner Casey Ashby at a ceremony in 2011. Casey is the store director of Gucci on Rodeo Drive. For Halloween in 2017, they wore matching outfits—Casey dressed up as an orange Hermès Birkin bag while Michael came as a quilted Chanel purse. (Casey made both costumes by hand.) 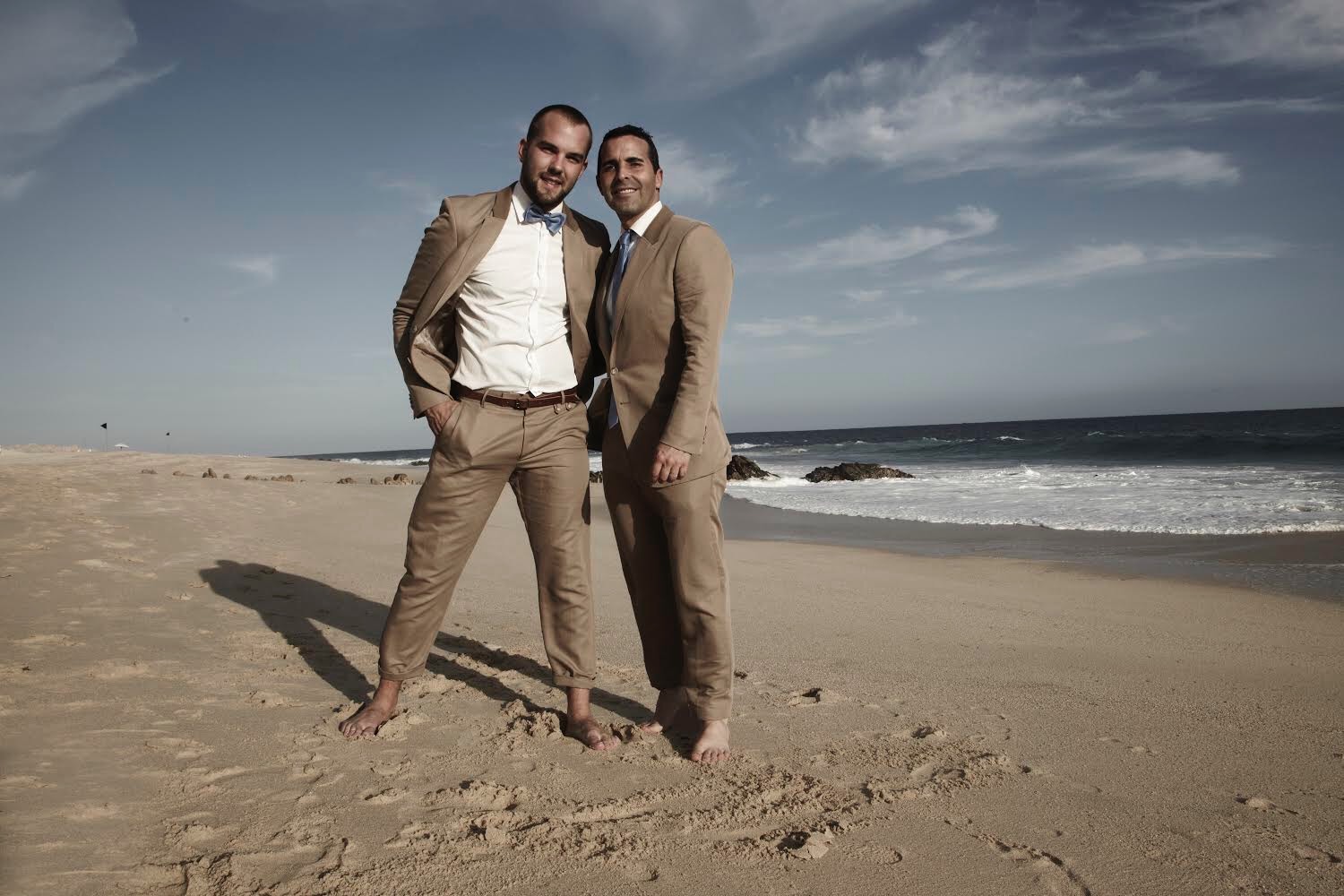 He’s had an eventful career in show biz.

Sanchez worked as an agent at ICM and as a producer for MTV before starting his own talent management company, Axis Management. An early client was Mary Murphy, a performer on So You Think You Can Dance, but that ended badly when Sanchez sued Murphy over unpaid commissions. In his suit filed in 2012, Sanchez described Murphy as a “desperate, cocaine-fueled nymphomaniac.” He currently represents seven clients, including a choreographer and reality dance show host named Daniel Karaty.

He’s really respected in the Netherlands.

Sanchez is listed as “consulting producer” on two well-received Dutch films, Soof (2013) and Soof 2 (2016), which chronicle the turbulent inner struggles of a middle-aged Dutch caterer. The films were box office hits in the Netherlands—but nowhere else.

He’s suffered some financial scrapes along the way.

Sanchez filed for personal bankruptcy in 2010. Among the debts he listed in court filings was a $165,000 loan from Lauren.

He claims Lauren romantically showed off Bezos’s dick pics to everyone in her circle.

“One time she tried to show me one,” Michael told Vanity Fair, “and I was like, ‘What the fuck is wrong with you? I don’t want to see that!’” He later described his sister’s affair as “a legendary romance that will blow your mind as to just how in love they are.”

He blames the Mossad and the Deep State for stealing his sister’s emails.

Sanchez claims the texts got to the Enquirer via spying by foreign governments, rival tech companies or “deep state” actors within the US government. Maybe even Trump himself enlisted the help of British intelligence or the Israeli Mossad to get the texts.

But the tabloid insists the leaks originated from a source much closer to home.

“It was somebody close to both Bezos and Miss Sanchez,” said AMI attorney Elkan Abramowitz after the scandal erupted. “It’s not Saudi Arabia, it’s not President Trump (and) it’s not Roger Stone.”

He’s bored of all of the attention.

In the past weeks he’s given interviews to Fox News, the New York Times, the Daily Beast, Business Insider, and Vanity Fair. Before he took his feed private, Sanchez tweeted: “People who belong in prison & gutter trash reporters are now threatening to twist my work into something bad with false & defamatory smears. #Yawn.”

He and his sister Lauren are said to be taking a break from each other. Maybe a long one…

She’s taking a month-long sabbatical from Bezos, to turn down the media heat. Her break with her brother could last a lot longer—particularly if she and Bezos go south.

Ed. Note: The number of clients Sanchez currently represents, husband Casey’s job title, and several other details have been clarified since the article was originally published.