LAPD detectives continue to investigate what is being called the “undetermined death” of an FBI informant who had been subpoenaed as a witness by the House Intelligence Committee investigating Deutsche Bank and its ties to former President Donald Trump.

Valentin Broeksmit, 45, was found dead in a courtyard of the Woodrow Wilson High School in El Sereno on the morning of April 25 when school employees showed up for Monday morning classes at 7:05 a.m. PST. There was no sign of trauma and “no foul play is suspected at this time, LAPD officials said.

What remains unclear is how Broeksmit, who called himself a “comically terrible spy” on his Twitter profile, got into the locked facility before his death. Sources told Los Angeles magazine, “He has no connection to that area, that school and no one knows how he got in.”

“We have a guy found dead in a secure high school on a Monday morning who was working with the feds and whose father suicided himself,” said one investigator with direct knowledge of the case. “The circumstances alone merit a second look.”

The Los Angeles County Medical Examiner-Coroner’s report on Broeksmit’s body did not determine a cause or manner of death, writing that the case is pending, and awaiting “additional information.” The LAPD believes that Broeksmit “was alone on the grounds of the school must of the weekend preceding his death.” The case has been assigned to a homicide unit detective. 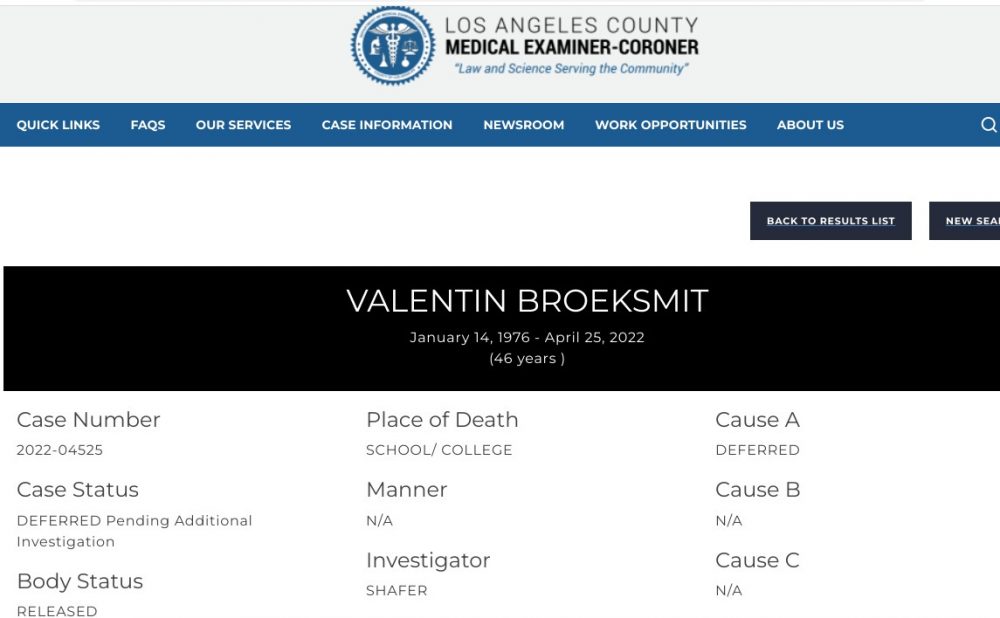 Valentin’s father, William Broeksmit, was a retired Deutsche Bank executive who hung himself in his family’s Kensington, London home in 2014. He left behind a trove of confidential bank documents. At the time of the elder Broeksmit’s death, Deutsche executives were embroiled in a US Department of Justice investigation that would lead to the bank paying more than $130 million to resolve a slew of federal charges relating to corrupt practices and shady relationships with foreign bad actors.

In 2019 Valentin Broeksmit handed hundreds of documents and emails from his father’s records to the FBI and various investigative journalists, including New York Times reporter David Enrich, whose book Dark Towers: Deutsche Bank, Donald Trump, and an Epic Trail of Destruction contains some of that intelligence.

Broeksmith was apparently unhappy with Enrich at the time of his death. A long Twitter feed authored by Broeksmit on Twitter @BikiniRobotArmy includes this April 2020 pinned Tweet.

“Imagine you turn on the television & you watch a guy doing the talk show rounds; (@davidenrich) telling the world YOUR life story focusing on all your mistakes. Using Concepts you explained to him. Even speaking your words verbatim – words that you taught him – as his own…,” he tweeted.

Imagine you turn on the television & you watch a guy doing the talk show rounds; (@davidenrich)
telling the world YOUR life story focusing on all your mistakes. Using Concepts you explained to him. Even speaking your words verbatim – words that you taught him – as his own…