Home Outdoors Which L.A. Zoo Is Better, the Abandoned Zoo or the Actual Zoo? 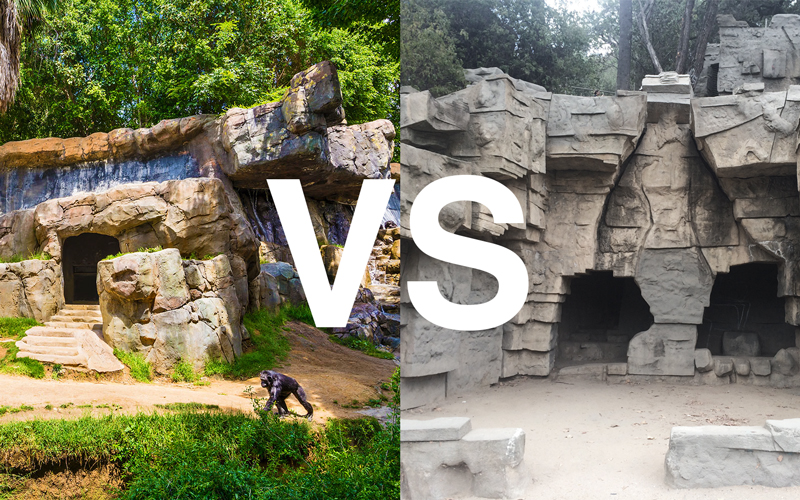 Inexplicably, Angelenos tend to forget that L.A. is home to not one but two zoos—the operational Los Angeles Zoo and the long-defunct Griffith Park Zoo (the previous home of the L.A. Zoo before it moved to its current location in 1966). That’s a crying shame. Just because a zoo is totally dilapidated doesn’t mean it’s meritless. Is the zoo that draws 1.75 million visitors every year really better? Here we present a side-by-side qualitative analysis to determine which zoo is truly the best. The lawn in front of the abandoned zoo is mown, and there are picnic tables in one of the large animal enclosures. Aside from that, it doesn’t seem like anybody is really maintaining the abandoned zoo at all, which is appropriate given that it’s abandoned. Holes have been cut in chain link fences that were once erected to keep vandals out of the enclosures. The grimy interiors are covered in graffiti, and beer bottles and spray paint cans litter the floors.

The actual zoo. Though the overall atmosphere of dilapidation at the abandoned zoo contributes to its allure as an urban ruin, it ultimately is loses out in this category to the immaculate L.A. Zoo. Plus 5 points to the actual zoo for upkeep. Guests with disabilities will find that the L.A. Zoo is wheelchair accessible, and there are both manual and electric wheelchairs available for rent at a reasonable price. The zoo also offers a shuttle service, sign language interpreters, and assistive listening devices, and provides safe kennels for service animals in the parts of the zoo where they’re not allowed. There’s no way a person in a wheelchair could navigate down this incredibly steep flight of stairs leading to a locked gate, let alone maneuver under the chain link fence and through the narrow passages between enclosures. That’s basically disability discrimination on the part of… well, no one really, since this zoo has been abandoned and left to deteriorate.

The actual zoo. Plus 5 points for accessibility. The actual zoo has an overall Yelp rating of 3.5 stars. Reviewer Ika I. writes, “Great zoo with good diversity of animal exhibits!” The abandoned zoo has an overall Yelp rating of 4 stars—half a star higher than the actual zoo. Yelp reviewer Lenore B. writes, “There’s a lot of tagging and some spots smell like urine. But I had a pretty awesome experience here!” The Los Angeles Zoo has around 250 species of animals, many of which are endangered. Being abandoned, this zoo doesn’t have any animals.

While the abandoned zoo has had animals in the past, an important criteria for zoos is that they have animals in the present. Assigning one point for every species of animal, plus 250 points for the L.A. Zoo. The L.A. Zoo is accredited by the Association of Zoos and Aquariums, a nonprofit organization devoted to ensuring that zoos maintain the highest commitment to animal welfare. The exhibits are relatively sizable with pools, waterfalls, and varying terrain. Zoo staff work to save condors from extinction and promote conservation, though they’re not without their critics. The enclosures at the abandoned zoo are archaic relics of a bygone era: constrictive iron cages, cramped concrete cells, and small enclosures. If this zoo were actually functioning—which, to reiterate, it’s not—it would rightly have animal rights activists up in arms. But the fact is, since there are no animals here, no animals are being harmed.

Judging this category is tougher than it might initially seem. Since the animals in the abandoned zoo do not exist while the animals at the actual zoo do, selecting a winner comes down to the question of whether or not existence itself is a net good.

In the book of Ecclesiastes, Solomon writes, “So I congratulated the dead who are already dead more than the living who are still living. But better off than both of them is the one who has never existed, who has never seen the evil activity that is done under the sun.” Likewise, German philosopher Arthur Schopenhauer, who saw a world in which pain outweighs pleasure, suggested that bringing a child into the world is problematic at best if not straight up unethical—an idea taken to its logical extreme by noted anti-natalist David Bentair in his book Better Never to Have Been: The Harm of Coming into Existence (it’s a bit of a downer). To never live is to never suffer.

Extending those ideas to animals in consideration of the subject at hand, the abandoned zoo can be see as a paradigm of animal welfare since it’s totally devoid of animals; we can be certain that its operation (or lack thereof) causes no animals harm and brings no animals into existence. Even if the L.A. Zoo, in its keeping and breeding of animals, is actively working to improve those animals’ lives, all animals inevitably experience some degree of suffering. Who are we, though, to determine the extent to which an animal qualitatively measures its own life? Besides, who’s to say that evaluating the merit of existence purely on a rubric of pleasure vs. pain isn’t too reductive?

Let’s call this one a tie. The actual zoo. Plus 30 points for pizza.

After a thorough analysis and a good amount of second-grade math, the final score is Actual Zoo: 293.5, Abandoned Zoo: 4. In terms of functioning as a zoo, it seems there’s no better zoo in the city than the actual one.

L.A. Zoo’s New Baby Gorilla Has a Name Fit for an Angeleno