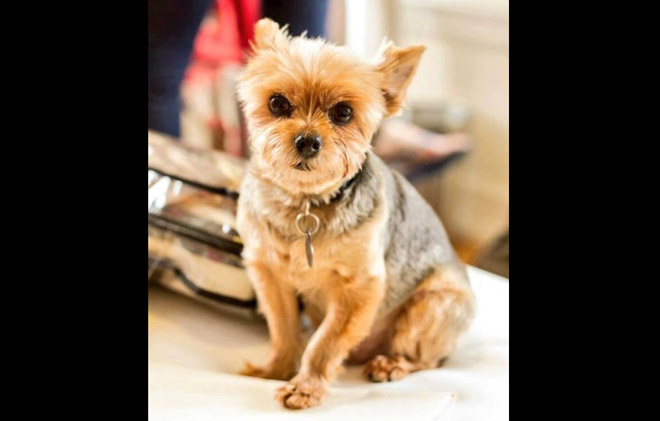 UPDATE: 5:17 p.m.
Walter has been reunited with O’Kelley. The actress tweeted “WE GOT HIM!!!!!!!” and a picture of herself with the dog shortly before 5 p.m. today.  Minutes later, she posted this second tweet: “2 guys in a white sports car with tinted windows just dumped him on Ambrose St. A hero named Joe Cisneros picked him up and called me. YAY!!” YAY!! indeed.

Have you spotted Walter? That question—along with reports of his Silver Lake  dognapping—started to go viral on social media today as news spread that actress Tricia O’Kelley’s five-pound miniature Yorkshire terrier was stolen from her front yard earlier this week. According to CBS Los Angeles, O’Kelley received a ransom call placed from a North Hollywood pay phone shortly after she discovered Walter, who is hearing impaired, had gone missing Thursday evening. At the caller’s request, O’Kelley and her family made flyers publicizing a $1,000 reward. But before an exchange took place, the suspect cancelled plans to meet with the O’Kelleys (who had contacted the LAPD), and threatened to keep the dog. NBC Los Angeles has confirmed Walter has not been returned as of this afternoon. So… have you spotted Walter? Authorities are directing anyone with information to the LAPD Hollywood Division.