Home Art Where to Find L.A.’s Most Instagrammed Walls IRL 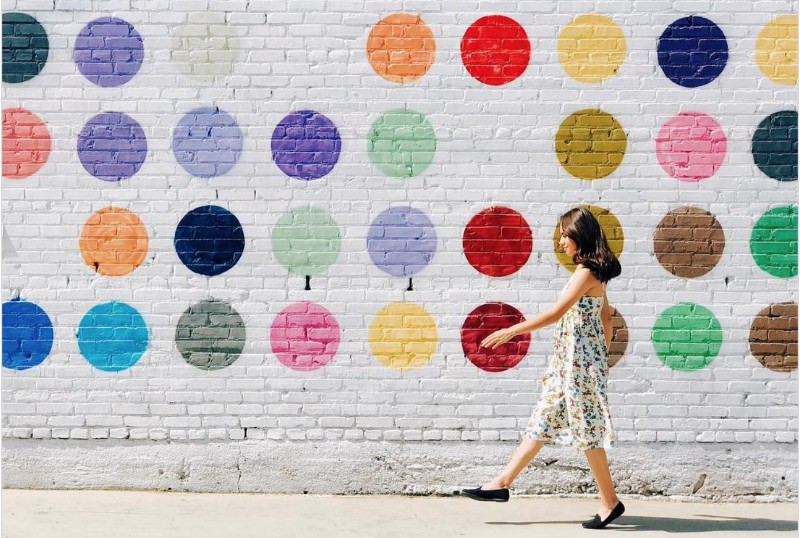 It’s an essential truth to social media addicts: no urban adventure is complete until it has been documented for Instagram, preferably in front of a colorful wall for local flavor. Los Angeles is home to many such backdrops—the city’s design landscape is dotted with historic street art and buildings painted in vibrant hues. So where, exactly, are L.A.’s most oft-photographed walls? One could be right around the corner:

This all pink facade belongs to the Paul Smith store in West Hollywood, and it’s the only of its kind. Each of the brand’s locations boasts a different graphic design.
Where to find it: 8221 Melrose Avenue, West Hollywood


This locally-inspired art been a popular backdrop for photographs since it appeared in 2013.
Where to find it: Cisco Home, 8025 Melrose Ave., Beverly Grove


New York-based artist Curtis Kulig’s “Love Me” campaign has spread its love across structures from Paris to Berlin, and on clothing from brands including Urban Outfitters and Vans.
Where to find it: 8549 Higuera St., Culver City


Maybe not exactly a wall, this colorful staircase is nonetheless a favorite backdrop for Instagrammers willing to walk up a few steps. Officially referred to as the Micheltorena Stairs, they were given their fun paint job by local artist Corinne Carrey.
Where to find it: 3324 Sunset Blvd., Silver Lake


Colette Miller’s angel wings are painted everywhere from Kenya to Melbourne, but here in Los Angeles, where they first appeared, there are four installations: on West 3rd Street at Orlando Avenue, at Westfield Century City, on the doors of the Regent Theater downtown, and in West Hollywood on Palm Avenue at Santa Monica Boulevard.
Where to find it: St. Regis Wine & Liquor, 8401 W. 3rd St., Beverly Grove


A giant “Hello” surrounded by roses, berries, and fruit (formerly pink and red kisses) is just one of two photo-ready walls at the extremely Instagram-friendly Carrera Cafe; they also offer a space for rotating murals inspired by current movies, including one for La La Land which proved particularly popular.
Where to find it: Carrera Cafe, 8251 Melrose Ave., Beverly Grove

8. The Other Love Wall


There are several #LoveWall murals around (including some not-entirely-authorized versions of street artist James Goldcrown’s original design), all sporting variations on the colorful, drippy heart motif. This one is behind Bardonna, where the palm frond wallpaper inside also makes a great backdrop for snaps.
Where to find it: Bardonna, 1601 Montana Ave., Santa Monica


The Most Famous Artist, AKA Matty Mo, has made many marks on L.A.’s walls (remember those hot pink houses?) but this dotty spot in the DTLA Arts District remains one of his most popular — and most Instagrammed. Bonus points if you find the corner where he also painted a human-sized honey bear.
Where to find it: The Springs, 608 Mateo St., downtown

RELATED: In Defense of Instagramming Your Food

This L.A. Couple Turned an ‘Insta-flirtation’ into an IRL Relationship

Ariana Grande Is Suing Forever 21, Claiming They Used a “Look-Alike” in Instagram Ads