Home Uncategorized Where Does California Rank When It Comes To Politeness and Cursing? 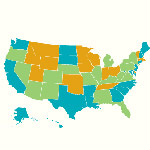 Alright, Angelenos, we’ve got good news and bad news. The good news is California ranks as one of the most courteous states in the country (must be all of those post-workout endorphins). The bad news? We’re also one of the smuttiest states in the U.S. (as in, that aforementioned courtesy flies right out the window—along with a flipped bird—when, say, someone cuts us off on the 405).

Marchex, a company that specializes in mobile performance advertising, aggregated information from 600,000 phone calls over the past year in order to create a list of the most and least courteous states along with the states who are most and least likely to use curse words. By analyzing calls made to a variety of business industries (auto dealerships, cable companies, etc.), Marchex was able to determine 66% of swears are spewed from the mouths of men, idle chatter deteriorates into vulgarity when the dialogue is over ten minutes long, and phone calls held in the morning are two times more likely to yield curse-crammed convos than afternoon or evening calls.

While California didn’t crack the top five in any one category (Ohioans swear like sailors; Washingtonians are goody two shoes; South Carolina is extremely polite; Wisconsin is not), the counterintuitive fact remains: We’re home to the one of the country’s most profanely polite populations.