Home Secret L.A. What’s Up With That Creepy Skeleton in True Detective? The Answer Is... 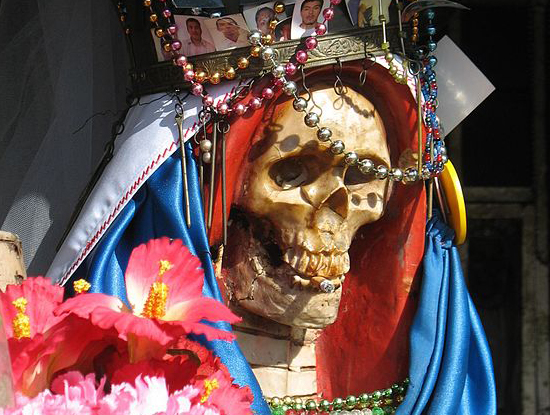 There were several unsettling moments in last night’s episode of True Detective, but one that stands out in the L.A.-based series is the scene in which corrupt cop Ray Velcoro (Colin Farrell) and his partner venture into the ransacked home of kidnapping victim Ben Casper, Vinci’s city manager. Casper’s lair is filled nearly floor to ceiling with enough pornographic art to make Larry Flynt blush. But amidst the phallic sculptures and sex toys is an even more striking symbol: a solitary skeleton, head covered with a woman’s shawl. She’s known as Santa Muerte, the patron saint of death, and has her own cult following, including a temple on Melrose Avenue devoted to her dark power. Here’s a bit of backstory on the fascination with Santa Muerte by Sam Quinones, from our Secret L.A. issue:

Eight years ago Oaxacan immigrant Sara Garcia decided she could no longer ignore the power of Holy Death. Garcia claims the Mexican folk saint, known as Santa Muerte, brought her out of a coma, then instructed her to found a church. Garcia followed orders, taking up the missionary cause and opening Templo Santa Muerte, a storefront church on Melrose in praise of Our Lady of the Holy Death, in 2006. The symbol of a menacing skeleton clutching a scythe looks as if it had been invented for the cover of some 1980s heavy metal album, but the belief in Santa Muerte dates back hundreds of years. Contemporary devotees have depicted her on canvases adorned in robes of every color and on items ranging from coins and crosses to peacock feathers and satin. Holy Death, they believe, can conjure love, rid a home of envy, and bestow miracles.

Faith in her has surged in popularity amid Mexico’s barbaric cartel wars. Traffickers, especially the fearsome Zeta cartel, erect shrines in her honor, asking for protection for their nefarious escapades. Smugglers in particular seem to curry her favor. In Phoenix, where kidnapping among Mexican criminals is rife, police report that they frequently find shrines to the Skulled Lady in stash houses.

Santa Muerte’s popularity seems to have eclipsed the belief in another Mexican underworld saint, Jesus Malverde. The mythical robber with matinee idol looks was for years a favorite among Mexico’s drug traffickers. To Garcia, Holy Death is about life, and, like life, all believers have the free will to interpret it in their own way. “You generate the energy you want,” she says. “You can get into satanism if you want, using her image or any other. It’s no longer hers when they do that, though. It’s another energy.”

Garcia has crammed her space with prayer beads, candles, and special water that is purported to purge anger and anxiety. Also in the shop are magnificent statues of Santa Muerte, some as tall as five feet, clad in Renaissance princess-style garb or draped in white satin with a pregnant belly. Services are held on Saturdays and Sundays at 7 p.m. “Knowledge of death helps us to be better people,” she says. “You recognize your errors. You see humans as brothers. You start to see plants and animals the same way. Death treats us all the same.” » 4902 Melrose Ave., Mid City, 323-462-1134.