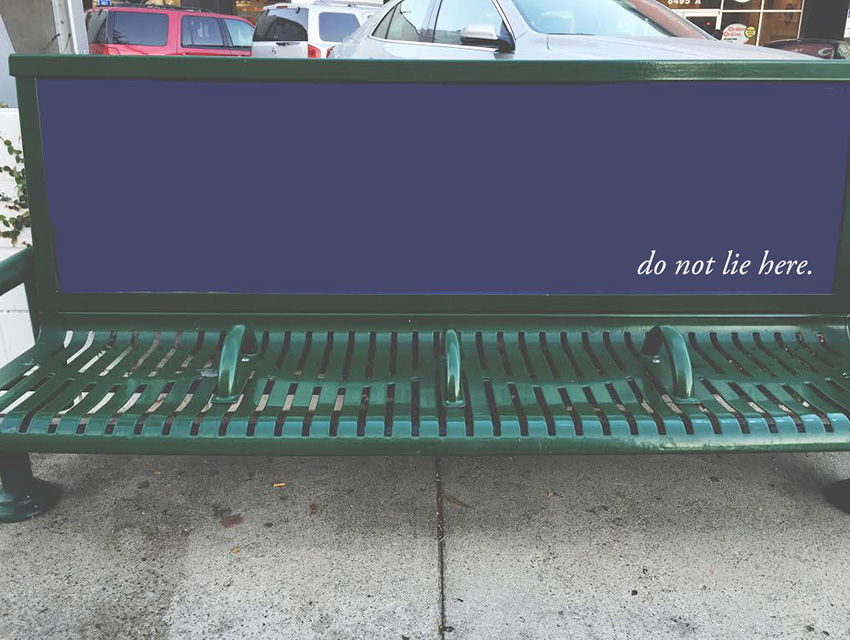 A frequent user of L.A.’s public transportation system, the bus is my mode of choice for most of my work trips. Lately, I’ve found myself wondering about an important if unglamorous piece of our city’s infrastructure: our bus benches.

If you haven’t really noticed them, L.A.’s new-ish bus benches are curvy and green (unless you’re in Westwood, where they are Bruin blue). They have slats to keep cool and their backs are solid. In many ways, the buses are result of successful design thinking. They may look low tech, but a lot of thought went into our permanent street furniture. According to Randy Smith, a designer with Martin Outdoor Media (the company that produced the bench style), they are modular in design, which makes them easy to produce and install and saves City Hall lots of money. They also have a special coating that makes them resistant to graffiti, which is great, because preventing tagging helps riders feel safe, especially in neighborhoods where graffiti is associated with gang activity.

But about those seat dividers. When I first spotted them, I was concerned they were designed to deter the homeless from using the benches as beds (much like how these metal protrusions do, in London). Smith assured me that the designers’ first priority was serving their clients—bus riders. With more and more Angelenos taking the Metro each day, making sure there is ample room for riders to sit at bus stops was their first consideration. But he also confirmed that designers did consider how best to discourage people from sleeping on the benches, even mentioning that one divider was not enough to deter the homeless from using them to set up encampments.

As wages fall and rent continues to rise, homelessness in Los Angeles has become an intractable issue. The city council declared it a state of emergency this fall. Some neighborhoods, desperate for solutions, have taken action into their own hands. Residents in Pacific Palisades, for example, are raising $500,000 to provide housing for its homeless neighbors.

In these tough times, L.A. could take a lesson from Vancouver. That city recently debuted transit benches that provide seating by day and shelter by night, helping residents with no place to sleep escape the rain. Not only is this smart design, but it also makes a bold statement about homelessness and dignity.

City officials and local leaders are working together and devoting financial resources to long- and short-term housing solutions for Angelenos in need. In the meantime, rethinking the design of our bus benches could bring more compassion to the streets.

Shauna Nep is a philanthropic advisor, an L.A. enthusiast, and a secret Canadian. You can follow her Los Angeles adventures on CityThink each week, and by following her on Instagram and Twitter.