Home Uncategorized What’s All The Hoopla About Hoopla Digital? 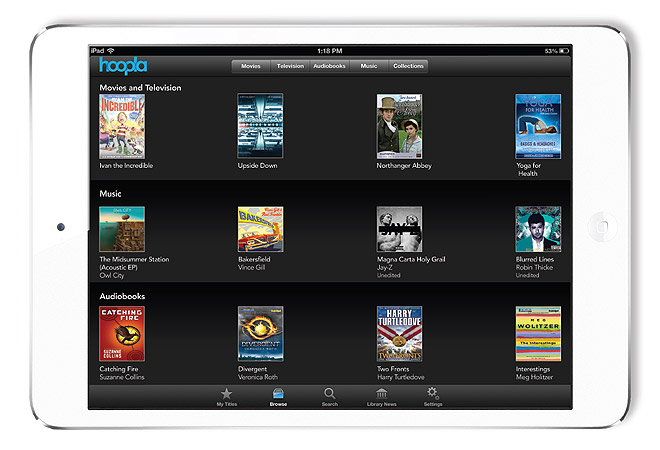 Netflix and Hulu had better watch out: Hoopla Digital is gunning for streaming glory.

Hoopla is available gratis to anyone with a Los Angeles Public Library card. (For Angelenos who have yet to explore the borrowing options at our sacred institution of the written word, it’s probably worth mentioning that library cards are also free for residents of California. That’s almost too much free for us to handle, except that it’s not.) The newish service is the brainchild of Midwest Tape Vice President Jeff Jankowski, and it allows patrons to stream or temporarily download films, music, and audiobooks. Midwest Tape has provided media to public libraries across North America for the past 25 years, and if Jankowski has anything to say about it, the company will soon be making a name for itself in the digital sector.

The crux of Hoopla’s convenience lies in the option to listen to books or watch movies offline, which is certainly an attractive feature—imagine downloading a film (or two, or three) to watch on a flight, where Wi-Fi is still rarely available (or functional, for that matter). It is for this reason Jankowski feels Hoopla can hold its own when compared to other streaming services. “I actually see it as complimentary to Netflix and Hulu,” he said, “but with the audiobooks and music, we’re actually offering more options.”

Jankowski went on to add that 80% of the video content offered through Hoopla isn’t available on Netflix, media like parenting tutorials, SAT preparatory videos, and documentaries. But that’s not to say they don’t have the popular stuff, too. “We’ve got a wide selection of Hollywood films, like ET, IQ, and Liar Liar,” Jankowski said.

Another perk of Hoopla is its non-traditional approach to the digital “rental” platform, which hasn’t strayed far from the one user/one copy structure. That is to say, if a library buys one copy of an e-book, they can only lend it out to one person at a time. Not the case with Hoopla. “All of our content is available at all times for customers,” Jankowski said. “Using the technology, every title that we offer from Maine to Maui is available 24/7. No waiting list, late fees, reserving items, or popular items being out of stock.”

Here’s hoping Hoopla lives up to its hype.