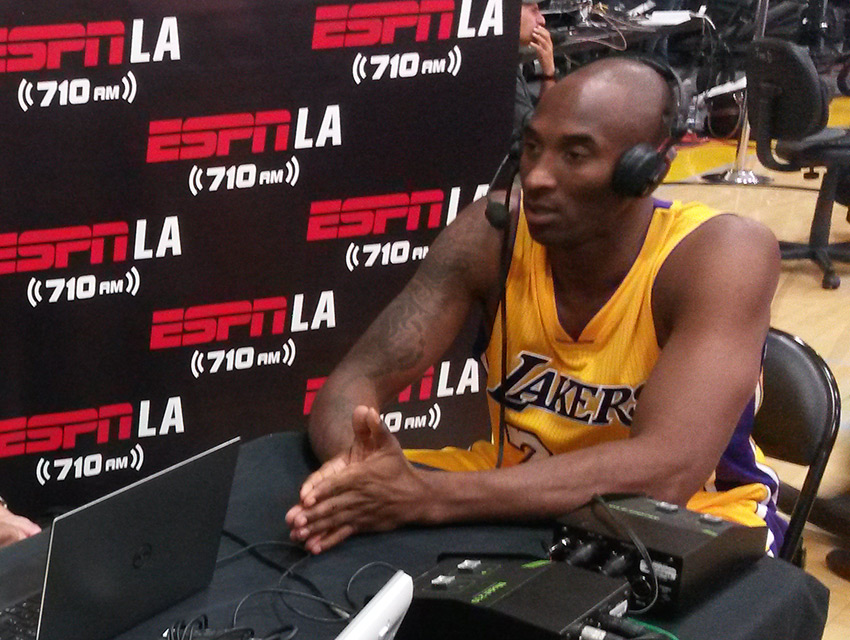 Entering his 20th season in the NBA with a resume bested by few other players in history, Kobe Bryant looked rightfully bored as he answered routine questions at Monday’s Lakers media day. Slumped in a folding chair in the team’s El Segundo practice facility, he read radio spots with all the enthusiasm of a DMV employee and was the only player to leave his jersey untucked. And why not? Coming off the team’s worst season in franchise history (21-61, a .256 winning percentage), one in which he played only 35 of 82 regular-season games thanks to a torn right rotator cuff, it’s not like there was much for Bryant to discuss. Not much, that is, except his pending future. Time and again, reporters pressed the 37-year-old future Hall-of-Famer for an answer to the question: Will this season be his last?

Bryant unwaveringly asserted that he didn’t know, but an anecdote he shared during an interview with a local radio station may have hinted at a truer answer. When asked about his recent appearance at a Taylor Swift concert with his daughters, Kobe’s blasé attitude vanished and his face lit up with a smile. He had agreed to come on stage with the pop diva, he said, because she had been so nice to his girls. After discovering Swift’s people wanted him to walk a runway, though, Bryant said his first thought was, “Mamba don’t catwalk.” But for his daughters, it seems, Mamba do catwalk—even if his girls were disappointed to discover that the show’s special guest was their father.

Lakers fans love Bryant’s intense work ethic, but the way he spoke about his family—relaxed, with a massive grin and a glimmer in his eye—showed us an off-court version of No. 24 we’d like to get to know, one that perhaps he’d like to get to know better himself. If Bryant’s exuberance in talking about his children means anything, maybe it’s that he’s realized that family life brings him more joy than life on the court. Maybe it means that this season truly will be his last.

A Year Later, the Story of Kobe’s Life and Death Off the Court Is Still Being Written