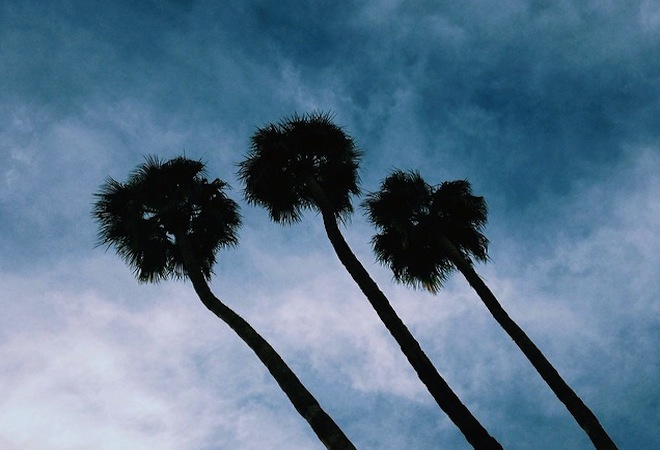 Like most major cities, Los Angeles is its own little world, with its own set of rules, and we Angelenos are, in our own way, absurd. We drive to destinations that are two blocks away. We refer to neighborhoods in Anglicized Spanish. We engage in New Age-y practices, like visiting the Integratron. This can make it difficult for outsiders to really “get” us, or our city. So let’s gather around and explain a few things to those friends, family members, and strangers who just wouldn’t otherwise understand:

We run red lights.
In most places, turning left on a red is downright illegal. Here, the  unofficial rule is two cars to a yellow, but since cars in the perpendicular lane use the yellow as a last chance to gun it, two cars are often making lefts on red. It’s practically the law! Why else did the city government do away with red-light ticketing?

We Instagram the hell out of sunsets (see also: palm trees, flowers, the beach).
Everyone in Los Angeles takes a photo of a glowing pink and/or orange sunset at least once (a year, or maybe a week). The top of a palm tree or two might also pop up in the feed. Bougainvillea? There’s a hashtag for that. Why do we do this? Because the beauty of nature is truly enveloping—and we love it.

We don’t know what season it is.
It’s all just summer-ish. Yes, Los Angeles marks time, and the real summer tends to get hotter (and lasts through Halloween), while a version of autumn hits us during most of the country’s descent into winter, but it’s just not terribly organized. Perhaps people in Antarctica feel similarly.

We wear sweaters when the temperature drops below 70.
Are we spoiled by so much sunshine? I don’t know, but the heat lamps come on at the first hint of a breeze. #chillyvortex

We don’t go the distance.
“I love Gjelina! I go every time I visit Los Angeles. Have you been?” is what an out-of-town acquaintance might ask, and when you say no, it’s in the West side, they might look at you funny. “How far is that from you?” Like, five or 10 miles. “That’s not far.” Technically, no, but it’s another world in traffic time, and it takes a lot of commitment.

We don’t care about Jon Hamm.
In his natural habitat, I mean. He’s sitting next to you at Little Dom’s because that’s where he sits. Visitors are always going to be excited by a celebrity, which is great, but you know you’re an Angeleno when you’ve seen Giovanni Ribisi or Kate Mara enough not to care.

We love Angelyne and West Hollywood Jesus.
Angelyne is a thing of beauty, a Los Angeles treasure. For those who don’t know: She is a model, actress, and singer who has paid for billboards of herself all over town (you may have caught them in the opening credits of Moonlighting). And speaking of misunderstood angels, West Hollywood Jesus is the king of perplexing. Only there can a man “make a living” by going to Coffee Beans dressed like Jesus.

We are often oblivious to our natural disasters.
Any time an earthquake or a wildfire makes national news, we expect a deluge of calls and texts and emails inquiring about our safety. As I tell my parents, unless the Hollywood sign is in flames, I am probably fine.

We rarely eat pizza.
Since tacos and burgers are more our culinary thing, most Angelenos have no clue where to go for a great slice. It’s either Domino’s, Pizzeria Mozza, or Vitello’s (which we only know of because of Robert Blake).

We let a summer go by without going to the beach.
Sure, we live near it—but we forget it’s there. Depending on where you live, it can be kind of a journey (see: We don’t go the distance). Don’t fault us for that, non-beach-having people!