Home Uncategorized What it Means to Come Home When Home is L.A. 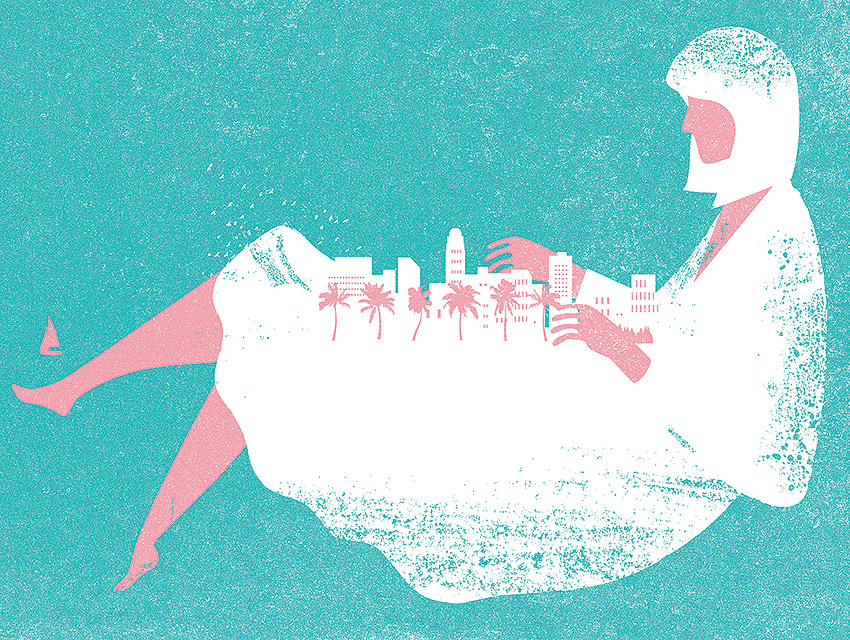 I have had a lovely if poignant summer. It was full, both literally and emotionally. First was New York in June: soft, warm days before the onslaught of heat. I went to meet a friend who had lived there for many years but no longer does. She is not well now and wanted to see the Manhattan skyline once more. That’s how she put it. So we converged to do the town. She was joyous and also forthright about her health. Around her former home we went, eating and laughing—with some sadness, too—while she took a last series of imaginary photographs of the city she loves. I swear I could hear the clicking of her eyeballs.

Next was Fourth of July weekend in Northern California: a wedding in Mill Valley and two days in San Francisco with my sister. What a beautiful, civilized spot her city is, all 47 square miles of it. We walked everywhere, from my sister’s house in Presidio Heights down to the water and along Fisherman’s Wharf and up to North Beach, eating well and poking around old-timey record stores and quirky boutiques. My sister, an L.A. native like me, is devoted to her adopted turf and was extolling its many gifts as we made our way about. I could hear her taking virtual photos, too.

Finally there was an eight-day stretch in Sun Valley, Idaho, for a writers’ conference to which I have been going for 20 years. I am now the associate director, the first grown-up title in my professional life, which I find highly amusing. The scenery was gentle, undulating mountains (the anti-Rockies) and cold streams (alas, diminished by the drought that is pervasive throughout much of the West). I was with writers I don’t get to see at any other point in the year. We chatted, joked, and groaned about the book business, but mostly we exulted in each other’s company and the beauty around us. Following an intense couple of days, we plunged into a chilly watering hole, an annual cleansing rite. I was busy snapping my own imaginary pictures to sift through during the long year, but rarely did I take a real photo with my cell phone. I prefer remembering.

After outings like these there’s the shock of homecoming. I don’t care how many times I have flown into Los Angeles, it is daunting to look down and see the size and sprawl of it. How can this be my place on the planet? How does anyone nest here? How do I? But there is also a kind of attendant moxie. Not for me the cozy confines of a small space. With nose pressed against the window of the descending plane, I count swimming pools, marvel at the coastline, and try to identify Park La Brea as I make plans for my reentry. There are things to be done, rituals of repossession. I need to make my peace with the city again, to claim it or let it claim me.

First on the list is a visit to the beach for my baptismal immersion in the Pacific. During the late summer months, it’s a nice embrace, especially after the freezing rivers of Idaho. I love rediscovering my native courage in the waves, diving beneath them. It’s in my DNA. Next is a hike up some coastal mountain trail to see the Santa Monica Bay from on high. Gazing about, I plan mini day trips, often lunches at favorite spots. I get anchored again through my stomach—through both the driving and the eating. In earlier days I would slip into my neighborhood, and that would be that. I’d more or less stay put. I realize that I have, like many of us, become more a citizen of the whole, a real Angeleno, as my sister is a San Franciscan or my pal is a New Yorker. In years past I thought of myself as a suburban girl, a child of West L.A. But no more. The city has grown up in thrilling ways—through its food and culture and diversity—and I have grown with it.

Now when I return, I need to get my arms around it all, and that means expeditions, hitting my marks, having my passport stamped again. It helps that at the end of summer the city is in an odd limbo, with things not quite started back up yet. Many of the locals are away, so the traffic is not too beastly, especially if you set out in the late morning.

This year I returned from Sun Valley to a visit from my youngest stepson, Mark, and his 12-year-old, Nick, and they were happily conscripted into my touchstone tour, as we began to call it. Mark grew up here, so he had his own ideas for the schedule. Off we went to Mid Wilshire, specifically the La Brea Tar Pits and the Page Museum. I’ll be honest: They wouldn’t have ordinarily made the cut for me, but it was fun to see them again—the goo, the goo—and imagine what primordial creatures had lurked there. We popped into LACMA to view the show Expressionism in Germany and France: From Van Gogh to Kandinsky (here until midmonth), which was, we agreed, awesome, and then took a stroll by the big rock in its resting place. I am crazy about it; it makes me laugh. Looking up, you can’t help thinking of poor Sisyphus pushing that boulder to the top of the hill again and again, an industrious and thankless, yet touching, enterprise.Finishing off our foray, we hit the Farmers Market, at 3rd and Fairfax, which has been a forever family favorite. I ate the fish-and-chips, as always, but the others fell for the chilaquiles at Lotería Grill. We also picked up a big porterhouse at Marconda’s, still one of the great butchers, to grill later. I like to fire up the barbecue when I have a stepson around because its operation is not something that I am skilled at. I even got a lesson this time, and the steak was wonderful.I was getting my bearings, a bird refeathering its nest.

The next day was downtown. After a morning walk to the Palisades Park bluff, we met up with another of my stepsons, Charles, at the Los Angeles Times, where he works. Like many journalists—and I might add, like all Fleming men (he has two more brothers)—he knows his grub. With an enduring affection for Mexican fare, I lobbied for enchiladas on Olvera Street but was outvoted by the others, ending up with the ethereal-yet-chewy puffy tacos at Bar Amá in the Historic Core. They are no longer officially on the menu, but if you ask for them, they will appear—try the chicken or chorizo. Having mainlined culture the day before, we felt free of the obligation to partake of art. I was in a full daze, listening contentedly to the male chatter, the sibling shorthand, as we strolled through the newish parks and past the converted loft buildings. That night’s supper revolved around trying to duplicate the Cuban chicken at Versailles in Culver City. Much laughter and kibitzing went into discussions of the marinade: sour orange juice, garlic, and cumin. I would give our finished product about a seven, maybe an eight.

On our final day we drove up Pacific Coast Highway, passing the small apartment on stilts where my stepsons and I first became a family. We smile at it—how did we all fit in there with our water gear? The inflatable rafts and fins, not to mention the complicated hurts and hopes. Then it was on to Back on the Beach in Santa Monica, where, toes in the sand, we ate a salad—Fred’s Special with potatoes and chicken. After lolling a bit by the shore, we took a swim. This was my childhood beach, and now, I said to Nick, “it’s yours.” “Sweet,” he said, not in the saccharine sense of the word but as the synonym for “cool.”

We had done it. By the time they left, I was back in my L.A. skin, reacclimated. We had put maybe 60 miles on the odometer. Our selections might have seemed trusty and tame, and on some level they were—and are. That’s the point. The unknown is for other times. I am thankful that my family isn’t avid about sushi; that gets costly. We are more old-school carnivores. In any event, these end-of-summer outings are not really as much about discovery as recovery, becoming comfortable again in my native land as I settle in for the year ahead.