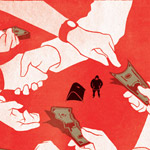 Figuring out who has the really big money in Los Angeles is as easy as walking along a two-block stretch of UCLA’s Westwood Plaza and looking at the names on the buildings. There’s the medical school (David Geffen), the neuropsychiatric hospital (Stewart and Lynda Resnick), the psychiatric institute (Terry Semel), the medical offices (Peter Morton), and the genetics research center (Leslie and Susan Gonda). Inside the I.M. Pei-designed Ronald Reagan Medical Center are more names for more things, including the Edward D. and Anna Mitchell Dining Commons and the Susan Harris and Paul Junger Witt Meditation Room. Plus dozens of names etched on a glass donor wall off the entrance: Milken, Riordan, Barad, Tisch, Wiatt, Grey, Lear. A total of $300 million in private donations was raised for the hospital alone.

Another universe away, within the six-block core of downtown’s skid row, you’d be hard-pressed to find any names of the rich and famous. Not for lack of opportunity—homeless shelters and soup kitchens would be quite willing to recognize generous donors on their walls. But as a rule charitable giving among L.A.’s moneyed classes is embarrassingly unfair. Many of the same millionaires and billionaires who would have no trouble donating large sums to the Museum of Contemporary Art or City of Hope are less likely to write checks to local social service organizations that care for the poor and sick.

The pecking order usually works this way: hospitals, higher education, arts and culture, human services. Based on surveys I’ve run across, hospitals get about 40 cents from each fund-raising dollar, and human services 12 cents. “We are two societies and we won’t admit it,” says Pablo Eisenberg, a senior fellow at Georgetown University’s Public Policy Institute and a longtime chronicler of philanthropic activity. A place like skid row, he says, is not a world that’s recognizable to the wealthy.

The recession has made everything a lot worse. Donations in the United States fell 2 percent in 2008, to $308 billion, only the second drop in 54 years of monitoring by the group Giving USA. Even healthier nonprofits have taken a pounding. But a down year at a university or theater company is far different than at a homeless shelter or soup kitchen. Organizations focused on helping the needy must deal with a double whammy: greater demand for services and fewer dollars to pay for them. Better than half said they were underfunded in 2009, according to a survey by Giving USA.

With L.A. handling more homeless residents than any other urban area in the United States, the concern is that double-digit unemployment will stay around awhile—perhaps two years or longer—leading to additional hardship among those living on the edge. The numbers are sobering: The Los Angeles Regional Foodbank reports that nearly 1 million county residents, or one in ten, were provided food assistance in 2009, up 46 percent from 2005. In large part these are not the hopelessly addicted or mentally ill; these are paycheck-to-paycheck people who have lost their jobs and often their homes.

“It’s been the most harrowing time, probably in our 119-year history,” says Andy Bales, chief executive of the Union Rescue Mission, which was able to keep the lights on last year after an eleventh-hour infusion from several donors (none of them big L.A. names). Bales, a former pastor who attempted to run for a Pasadena city council seat years ago on a platform tied to the plight of the homeless, pulls out monthly stats that reveal a 43 percent increase in the number of people receiving shelter in December—too many for the mission’s residential floors to handle. To accommodate everyone, cots and makeshift tents have been set up in the chapel, conference room, and lobby area. Meals, too, are becoming a challenge (almost 3,000 a day), so Bales solicits help from food suppliers looking to unload a case of surplus chicken or frozen burritos. That’s how costs can be kept down to 30 cents a meal. “They’re pretty good, you can see,” he says, tapping his stomach.

“How much would you need in donations each year to make yourself whole?” I ask.

For L.A.’s wealthy, we’re talking tip money. The latest Forbes list of the 400 richest Americans shows that the L.A. area has 26 billionaires worth close to $62 billion—and that’s after weathering the worst of the recession. Thousands have net wealth well into the nine figures. Each of them could bankroll the entire place for years with barely a bother. Where are they then?

Another pause from Bales. “I want to say this as kindly as I can,” he continues, “but I’ve been amazed at the lack of support that’s come from the local business community.” He does acknowledge limited corporate giving (Subway and Bank of America, among others), but then he tells me about a fund-raising event featuring Los Angeles Times columnist Steve Lopez—author of a widely praised series on skid row—that generated only a single check. Actually the mission’s money crunch would be far worse were it not for the fortuitous sale of stock and real estate, both right before the economic plunge. As for 2010, “we’re going to be hanging on by our fingernails—and praying—through spring, summer, and early fall,” he says.

That L.A.’s very wealthy choose not to help L.A.’s very poor is a touchy subject in the nonprofit community. No one wants to risk alienating the same people who could help pay their bills. So instead of hearing outrage about the disparities, I get explanations. Rich Angelenos are generous (I’m told individual giving in L.A. totals almost $10 billion annually), but they’re also selective. When writing checks, they’ll usually support causes that focus on future goals—educational and medical mostly—as opposed to funding emergency services that simply make a bad situation less bad. There are exceptions: Developer Rick Caruso has made hefty contributions to Para Los Niños, an L.A. nonprofit that provides child care and other services for low-income families (he and his wife have their names on the skid row building). Billionaire investor Haim Saban and his wife, Cheryl, have given millions to the Los Angeles Free Clinic (renamed the Saban Free Clinic).

But such giving is scattershot at best; L.A. has thousands of nonprofits that cater to the poor and don’t have access to generous contributors. Besides, many donors believe that foundations and governments should be funding those organizations (never mind that foundation money is drying up and social programs are being slashed by state and local governments). “Look, people give to what they feel passionate about,” says Jim Ferris, director of USC’s Center on Philanthropy and Public Policy. “They give to where their heart is and what they know.”

At Walt Disney Concert Hall, for example, the names of high-end donors blanket atriums, hallways, elevators, and escalators. All told, 283 donors gave at least $100,000 each to have their names displayed—and many of them know one another. Indeed, several nonprofit executives I spoke to said that fund-raising should really be called “friend-raising” because of the social and business interconnections. When organizations are looking for honorees to headline their annual galas, it’s best to get folks who can draw a crowd, even if the person is not especially committed to the charity (and many aren’t). It’s not unusual to have quid pro quo arrangements in which the honoree guarantees a certain number of tickets to an event. Hollywood types are obviously a draw, but they’re also notoriously fickle and will mainly contribute to national or international causes that make them look good. Causes du jour, such as a political campaign or a natural disaster, get their attention, but not so much local charities.

In her job as UCLA’s associate vice chancellor for development, Tracie Christensen has seen all kinds of donors, among them the ones who helped put up those buildings on Westwood Plaza. Her 14th-floor office on Wilshire Boulevard overlooks Westwood Village, and beyond that are the leafy enclaves of high-priced real estate. “Prime location,” she says with a smile. While the school was hammered last year by government cutbacks, resulting in lost jobs, salary cuts, and higher tuition, the separately operated fund-raising side still raked in $361 million. “There have been down years, but over the last five years we’ve averaged $400 million,” says Christensen. This follows a decade-long campaign that raised $3.05 billion in gifts and pledges, including a sizable number of huge donations ($10 million and above).

Behind the cash is a sophisticated fund-raising operation made up of 140 staffers who contact prospective donors by phone and in person. Donations are especially heavy from non-alumni, many of whom live close to the school. “We help people identify their particular interest on campus, what kind of impact they would like to have, and we match that with an academic priority,” Christensen says. In other words, if you enjoy concerts at Royce Hall or were treated well at the university hospital or your son graduated with honors, you are more inclined to give. None of the skid row charities can begin to compete with such an enterprise.

I mention the struggles facing Union Rescue Mission and other nonprofits helping poor people and ask her whether the system might be skewed toward a nationally renowned institution like UCLA. It’s a loaded question—what can you say when your donor pool includes billionaires Michael Milken and David Geffen and when 21 percent of the $361 million raised last year came in chunks of between $1 million and $5 million? Christensen looks uncomfortable. “We have a prospect base that has a lifelong connection, which a social service organization doesn’t have,” she says after a few beats. It makes perfect sense, in the most imperfect way possible.