Home Uncategorized Here’s the Deal with Those Weird Warning Signs Showing Up All Over... 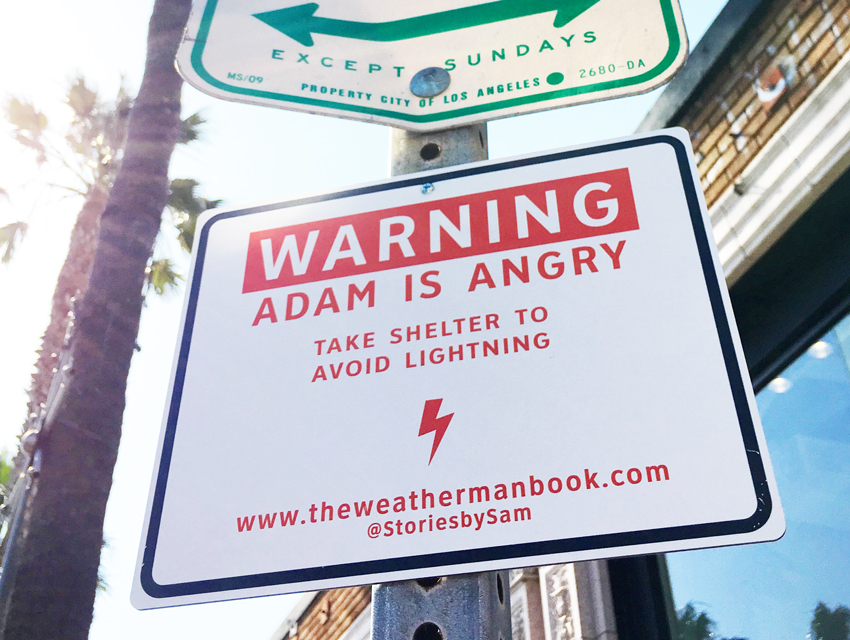 As if the prospect of the Big One isn’t already a dark enough shadow over our collective consciousness, an assortment of official-looking signs have appeared warning of imminent natural disasters, all of which are caused by—some guy named Adam’s mood? If you frequent the Abbot Kinney, Los Feliz, Sunset Junction, or Downtown areas, you’ve probably run across them. The good news: Adam isn’t a real person. He’s a character in 26-year-old Sam Hayes’s forthcoming novel, The Weather Man (June 30). In the most millennial move ever, Hayes has taken to the streets to promote his piece de resistance guerilla-style. He dresses up as an inconspicuous construction worker and bolts those signs—aluminum knockoffs of actual signage that he ordered online—onto poles along prominent streets. And because he looks the part, no one really pays him much mind.

“I’ve had cops drive past me slowly and not even look twice,” he says.

The premise of the book is that a guy named Adam, the beloved national weatherman of an optimistic, post-WWIII America, discovers that his emotions have somehow started to control meteorological conditions. When he’s upset, tornadoes, hurricanes, earthquakes, et al start to wreak havoc on the nation. So, per a government mandate and with nearly infinite resources at his disposal, Adam embarks on a quest to, you know, just be happy. Harder than it sounds.

It’s taken Hayes seven years and as many rewrites to get this book where it is now. But because publishers aren’t particularly interested in books by, for, or about millennials (The Weather Man is all three), he’s making this thing happen on his own through Kickstarter and Amazon’s agent-assisted self-publishing program, White Glove. You can check out the first chapter here, preorder the ebook for $3, or let Hayes himself tell you more about the project from the garage that he apparently lives in:

In a New Prequel to ‘The Great Gatsby,’ Nick Carraway Gets His Own Mystery