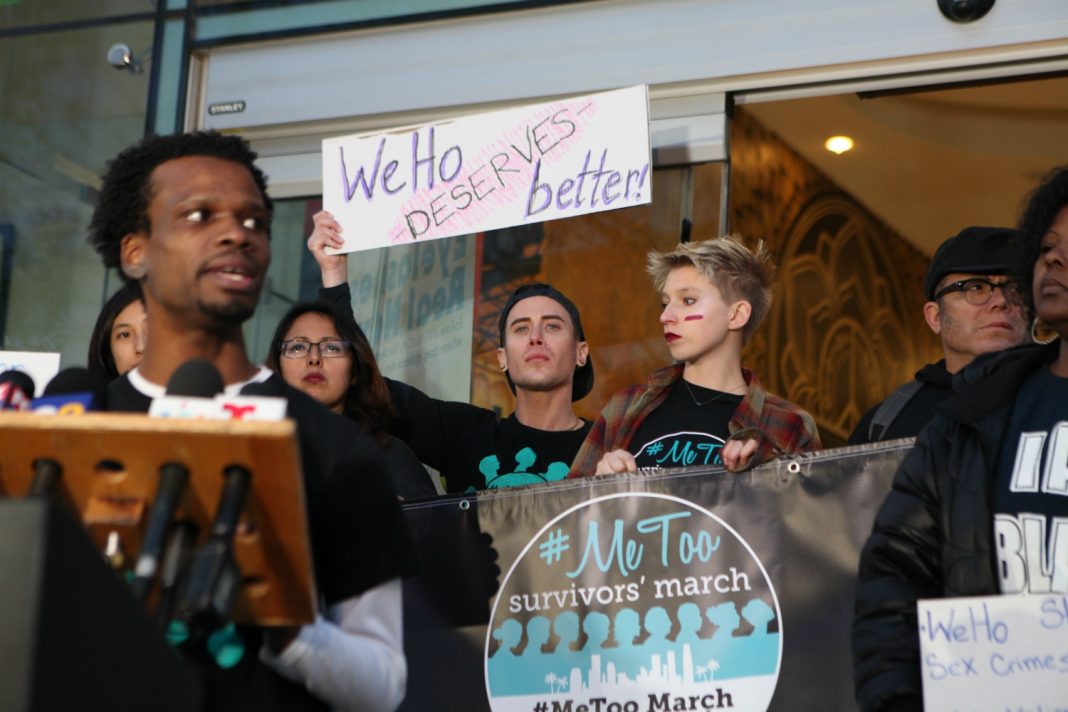 On Tuesday night, more than a dozen protesters, including representatives from Black Lives Matter and the #MeToo movement, stood outside the West Hollywood library and called for the resignation of embattled mayor John Duran.

Duran has been a target of ire for weeks now—and not just for allegedly inappropriately touching a fellow member of the Gay Men’s Chorus or sexually harassing a former employee.

What protesters see in Duran, and much of West Hollywood’s city council, is an abdication of justice and moral duplicitousness. In a city that prides itself on its progressive bonafides, they wonder why the deaths of two black gay men don’t seem to matter, and why a mayor should be allowed to spout body-shaming comments about his alleged victims (for which Duran has since apologized.)

Others were angry that West Hollywood’s political establishment hadn’t pushed for Ed Buck’s arrest after a black man was found dead in his apartment for the second time in two years. Some find it especially suspect that Duran was Buck’s attorney for more than a decade, and that the mayor received over $11,000 in donations from Buck in his campaign for L.A. County Supervisor in 2014, more than almost any other individual that year.

“I had assumed the death of Gemmel Moore would be a slam-dunk arrest,” said Dennis Gleason, policy director for councilman Joe Buscaino. “Imagine if it had been me who was found dead,” he said, motioning to his face. “Do you really think justice would not be served?”

“I don’t think it’s a coincidence that Ed Buck has connections to power and has been able to evade arrest,” another speaker said.

At the center of the protest, dressed in a khaki jacket and shiny black shoes, stood Jasmyne Cannick, a political consultant and activist whose fiery social media posts and self-funded investigations have greatly shaped recent protests in West Hollywood and the conversation around Buck in particular.

For over a year and a half, Cannick has been pushing for justice to be served against the political donor, who she sees as a “predator” with a fetish for down-on-their-luck black gay men. Armed with diary entries, security footage, Adam4Adam messages, and photos from inside Buck’s home, she’s painted a disturbing portrait of Buck’s alleged behaviors.

She’s also been warning sex workers to stay away from his home. Last July, six months before the death of Timothy Dean, Cannick wrote on Twitter, “If another young, Black gay man overdoses or worse dies at Democratic donor Ed Buck’s apartment it’s going to be the fault of the sheriff’s dept and L.A. District Atty for not stopping him when they had the opportunity to.”

If another young, Black gay man overdoses or worse dies at Democratic donor Ed Buck’s apartment it’s going to be the fault of the sheriff’s dept and L.A. District Atty for not stopping him when they had the opportunity to. #GemmelMoore #Justice4Gemmel pic.twitter.com/jlbS2KTvNe

To her, the message sent by city council is clear: that men like Ed Buck—rich, politically connected—are allowed to get away with anything because of the color of their skin and the money in their bank accounts. “When we die in this city, we expect our deaths to matter,” she said.

Duran’s inaction, from Cannick’s point of view, isn’t surprising given the fault lines between white and black LGBT people, which she seems intent on exposing. After a black speaker at a West Hollywood city council election forum was confronted by a man who called him the n-word and “monkey,” Cannick wrote on Twitter, “But we’re all one big happy gay family, right?”

“There’s been racism in the white gay community for years,” she said in an interview. “Just yesterday, I was talking to somebody about how the Abbey still doesn’t let you in if you wear baggy pants or sneakers. It shouldn’t be a surprise that many black people don’t feel comfortable there. And instead of making clubs more inclusive, they create a ‘hip hop night.’”

She’s not entirely optimistic that the LGBT community will be able to band together and affect change. “We talk a good game on social media, but in their everyday life, do people demonstrate that same passion and fervor for justice? No. That’s how people like Duran get reelected. But if we’re really serious about believing and supporting victims, we have to put that into practice now.”

Duran, who was absent at the protest, is apparently at a hospital being treated for a blood clot in his leg. In a status update posted to his Facebook account he wrote, “In my hospital room with 4 gay men exhibiting bawdy gay humor to the delight of all in hearing range.” When a friend replied, “Careful, some poor fragile thing from the GMCLA Chorus might get her little panties in a wad,” Duran gave the comment a digital thumbs up.

Ed. note: This post has been updated to more accurately reflect the nature of an allegation against John Duran.

RELATED: The Mayor of WeHo Has Been Accused of Misconduct and Is Leaving His Gay Men’s Chorus Post