Home Uncategorized We Got Dwight Howard! 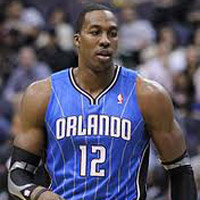 Christmas has come early: The former Orlando Magic center known as Superman will ditch his old threads and be suiting up for the purple and yellow. Yeah, that guy who swats wayward shots and layups like bugs and who posterizes big men for breakfast. Dwight Howard.

Basketball mucky-mucks and trade pundits have been speculating what the big man would look like in a Lakers jersey for a couple years now. Well, we needn’t wonder any longer. Howard—who last season averaged 20.6 points per game, 2.15 blocks per game, and 14.5 boards per game—is joining a reinforced West Coast squad.

He joins the Black Mamba, Steve Nash, and that other big guy, Pau Gasol. It would be an understatement to say that the Lakers and L.A.’s new Big Four have a chance at being world champs—they have the talent, they have the experience. It would, however, be equally foolish to say this lineup guarantees another ring for the City of Angels.

Last time L.A. had a Big Four lineup (see Malone, Payton, Bryant, O’Neal), things didn’t pan out as expected. Bryant and Malone battled injuries throughout the ’03-’04 regular season, and though the team made it to the finals, Detroit reigned supreme. With other star-studded powerhouses (see the Miami Heat and the Oklahoma City Thunder) in the East and the West, the Lakers will have to find a rhythm quickly.

Welcome to L.A., Howard. You’ve got big shoes to fill and heavy expectations to live up to.