Home Politics Watch the Mayor of Los Angeles Drop an F-Bomb While Holding a... 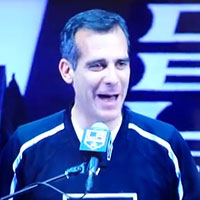 “They say never, ever be pictured with a drink in your hand and never swear,” he told the crowd, “but this is a big fucking day.”

The response to Garcetti’s televised rallying cry was considerably less surprising than the cry itself: it incited backlash from some residents and media, and, like the championship win at the center of the celebration, roaring applause from fans.