Home Uncategorized Walking to the Other Side 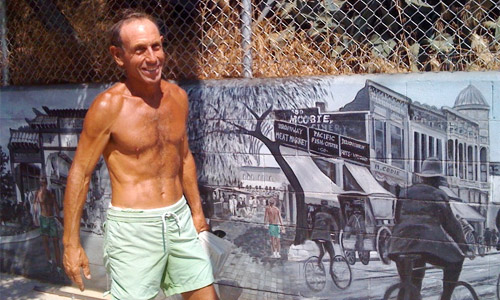 Nobody walks in L.A.? Marc Abrams proved Missing Person wrong and right. He walked up to 30 miles a day. That was enough to make him famous. Like the rotating foot-on-a-crutch sign on Sunset Boulevard, Marc’s constitutionals were a perpetual-motion symbol of Silver Lake individualism and energy. He talked as fast as he walked. When he was funny it wasn’t intentional. Describing his routine, he told me, “I go around the lake, down Griffith Park Boulevard to Sunset, down Sunset, down Silver Lake to the reservoir, and then back. I do it twice. In the morning I take a short walk to get my papers–that’s just five miles.” There was something endearingly off about him. He was a doctor with a general practice (in the Valley) yet ate only junk food (according to him). He attended Oxford University and was knowledgable about classical music, yet read USA Today along with the Wall Street Journal (and didn’t seem to think one was less worthy than the other). His 50 SPF sunblock quickly wore off during his three-hour jaunts, and by not reapplying it, he developed a scary-dark tan. Ironically, he had sold his medical practice not long before his death in order to spend time with ailing family members. He believed walking would keep him fit enough to enjoy a long retirement. It made him friends. People would approach him to ask, well, what was his deal? “They would say, “You walk because you have a heart condition, right?” he told me. “Believe me, if I had one, I’d be dead.”