Home Politics A Movement to Get Black Voters to #WalkAway from the Democratic Party... 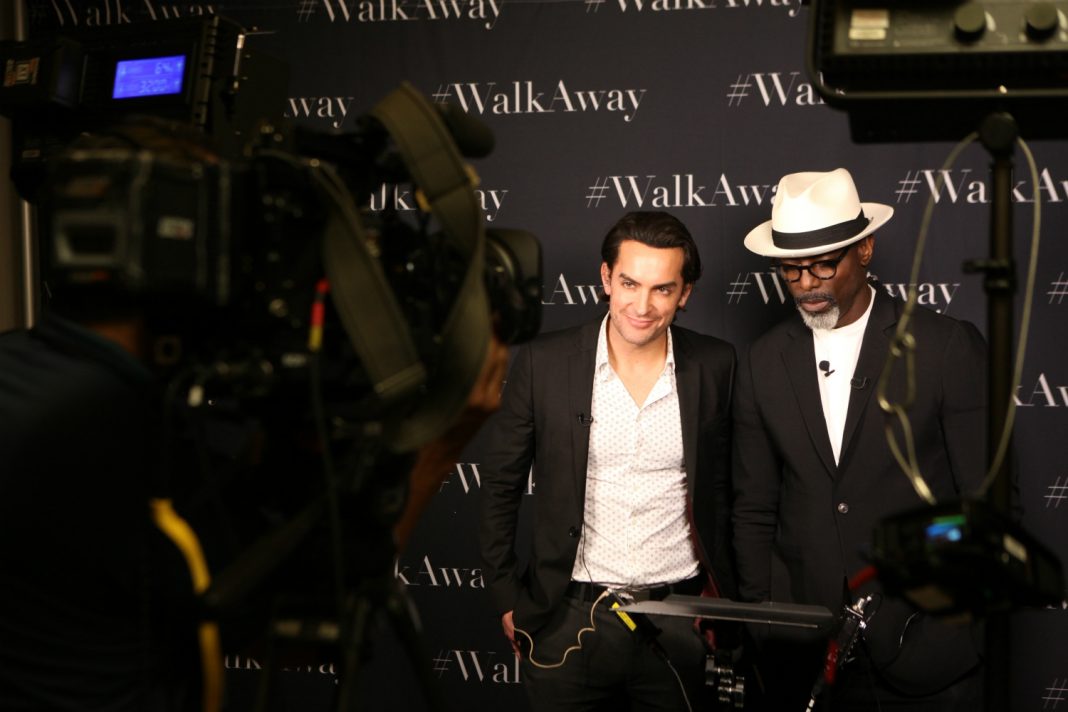 A line snaked down Olympic Boulevard in front of the Regal Cinemas at L.A. LIVE, even doubling back on itself in the other direction. The diverse crowd had queued up for a chance to watch the premiere of Poms, a feel-good comedy in which Diane Keaton, Jacki Weaver, and Pam Grier prove that osteoporosis is no match for pep when it comes to cheerleading. On the other side of the building, the red carpet entrance snarled traffic as the movie’s stars strutted to their seats.

Two floors above the chaos of the opening, a smaller collection of people queued up outside auditorium 11 for a documentary titled The Great Awakening: Breaking the Chains of the Democratic Party. Signs in front of the theater and T-shirts on volunteers all displayed the hashtag #WalkAway, the social media callsign for a campaign encouraging Democrats and unaffiliated liberals to join the Republican party. The documentary represents the group’s effort to target black voters, who the campaign says have been manipulated by a liberal conspiracy into voting against not only their own interests but also their own lives.

The hashtag made news in July 2018, when conservative outlets picked up a YouTube video by self-proclaimed former liberal Brandon Straka, in which the gay New York City hairstylist and actor renounced the Democratic party. It soon came out that Russian bots and non-authentic twitter accounts had boosted the hashtag’s reach. Then a series of memes claiming to show former Democrats “walking away” from the party turned out to be photos of unwitting, anonymous models from Shutterstock.

Straka, who’d trademarked the hashtag, and created Twitter and Facebook accounts, as well as an LLC for the campaign, tweeted that the memes were “not from the #WalkAway Campaign.” (Although it is still registered as an LLC, Straka is currently waiting for a determination from the IRS for nonprofit status).

While #WalkAway soon slipped down Twitter’s trending list and off the news radar of centrist and left-leaning publications, it continued to circulate within the conservative news sphere. Despite accusations that he was running a grifting operation, Straka (pronounced Strahk) went on to give interviews to Alex Jones of Infowars and Laura Ingraham, Jeanine Pirro, and Tucker Carlson of Fox News. These media appearances helped #WalkAway progress from phone and computer screens to in-person events, including the #WalkAway March, at which attendees could spend anywhere between $250 for a gala dinner to  $10,000 for the “Diamond Plus Partner Level” package.

Straka moved to New York City from the small town of O’Neill, Nebraska, with hopes of going into film and television. With only one unnamed credit listed on IMDB, his dreams never materialized. Instead, he acted in “off-Broadway and off-off-Broadway musicals” and soon developed a substance abuse problem. Four and a half years ago he got clean, but by the time he successfully went viral (after months of trying unsuccessfully, first as a liberal and then as a conservative) he says he only had $350 in his savings account and as much in his checking.

Then his video caught the attention of the right-wing internet. Now, he works on the campaign full time, with funding, he says, from donations and product sales. By the end of August, his GoFundMe had raised over $67,000, in part thanks to a $10,000 donation by Alex Jones. Today, his GoFundMe has more than $326,000.

Straka has repudiated a certain version of liberal ideology—evidence of the Democratic bad faith behind a focus on marginalization.

“If you are a person of color, an LGBT person, a woman, or an American immigrant, the Democratic party wants you to know that you are a victim and destined to stay that way,” Straka says in his original #WalkAway video. By suggesting that, to exit systems of oppression, you only need to stop thinking of yourself as systematically oppressed, Straka’s argument takes the traditional conservative gospel of self-empowerment and punctuates it with the conspiratorial leanings of figures like Alex Jones, Jacob Wohl, and Donald Trump himself.

The day of the L.A. LIVE screening, Straka tweeted that the event had sold out—277 RSVPs, in total. But once the line of 70 had fully passed into the theater, most of the seats remained empty, which Straka blamed on the confusion begat by the larger premier downstairs. (A few more people trickled in after things began.) The mostly white crowd had more black faces than a typical Trump rally, including the six panelists for the Q&A discussion following the documentary, among them former Grey’s Anatomy actor Isaiah Washington.

The 40-minute documentary, an edited compilation of 20 testimonials by black former Democrats taped on phones and webcams, is broken into chapters, including “The Indoctrination,” “Modern Day Plantation,” and “A New Beginning.”

“I walked away from the Democratic plantation,” one person says, followed by three rapid clips that repeat the word “plantation.” The testimonies all follow the same trajectory: Having been raised to vote for Democrats, the voters “wake up” to the party’s lie after the disillusionment of Obama’s eight years in office. Then, driven by their disappointment, they “started digging deeper.” This leads them to conclude that the Southern Strategy, the mid-century Republican shift to appeal to Southern white voters through racist policies, never happened—an idea almost universally rejected by historians and political scientists. Democrats, according to this idea, continue to be the party that seceded from the Union to maintain the institution of slavery.

The movie articulates other conspiracies, including one that accuses Planned Parenthood of operating with the purpose of shrinking the black population.

“I don’t know if anybody watches The Matrix, but you go and take the red pill,” a woman says into her camera as a chorus of strings swells dramatically in the background.

After the screening, the panelists took turns sharing their own #WalkAway stories. In the middle of the presentation, Straka and Washington stepped out of the theater for a remote interview with Fox News.

A minority by virtue of his sexuality, Straka offers both cover and proof for a worldview in which you can red pill yourself out of marginalized status. Straka insists that he has experienced nothing but open arms and acceptance within the Republican Party. As for the increase in hate crimes against people of color and LGBTQ folks since 2016 as reported by the FBI, he claims in a phone call that those numbers are “yet another false narrative perpetuated by the liberal left.”

“As we’ve seen time and again, a good amount of hate crimes that are reported turn out to be hoaxes,” he says. When asked for data on this, he admits “I don’t have numbers,” but points to a few anecdotal cases.

Even so, his own panel included Jesse Lee Peterson, a far-right radio host and minister with a long history of promoting misogynistic, racist, and homophobic beliefs. He has said that giving women the vote was “one of the greatest mistakes that America made” and has thanked God for slavery. As recently as April, Peterson blamed the election of Chicago’s lesbian mayor on the woman vote, saying, “You have mayors [who are] lesbians—I think we got more than one in the country—and we have homosexuals, and men and women who are living together without being married, and Muslims and all the wrong kinds of people running our country.”

“[Women] don’t have men leading the way and then women have convinced the men to vote for the homosexuals and other people,” he said.

Straka claims to have been unfamiliar with these statements, but even after hearing them read to him over the phone, he says he doesn’t see anything homophobic about them. “I think that he has strong views surrounding certain political issues that are based in his religious faith,” he says.

“And my point is, what difference does it make? I, as a gay man at this point, we as LGBT people in this country, have attained political equality, legal equality under the law,” he argues.

But even though federal law does not explicitly ban discrimination on the basis of sexuality, Straka says the real victims of discrimination are conservatives who lose jobs because of their political beliefs. In that same vein, both the panel and the movie made the point on Wednesday that white, heterosexual, Christian men face more discrimination than any group in the country.

Similar ideas of white disenfranchisement have also found purchase with the neo-Nazi marchers at Charlottesville and mass shooters like the Charleston church shooter, the Tree of Life shooter, and, most recently, the Poway synagogue shooter.

But Straka calls any connection between far-right ideology and these acts of violence “absurd.” Instead, he and Peterson see them as further evidence of white marginalization.

“A lot of these young white men and women are becoming angry because they can’t speak up and they have been accused of everything that goes wrong in this country, especially for white, straight, conservative Christian men of power,” Peterson said to the audience. “I’ve been encouraging the white guys to start speaking up and don’t hold your anger inside like that, because they’re forcing you to become angry. Once you become angry, you’re going to carry out what they accuse you of.”