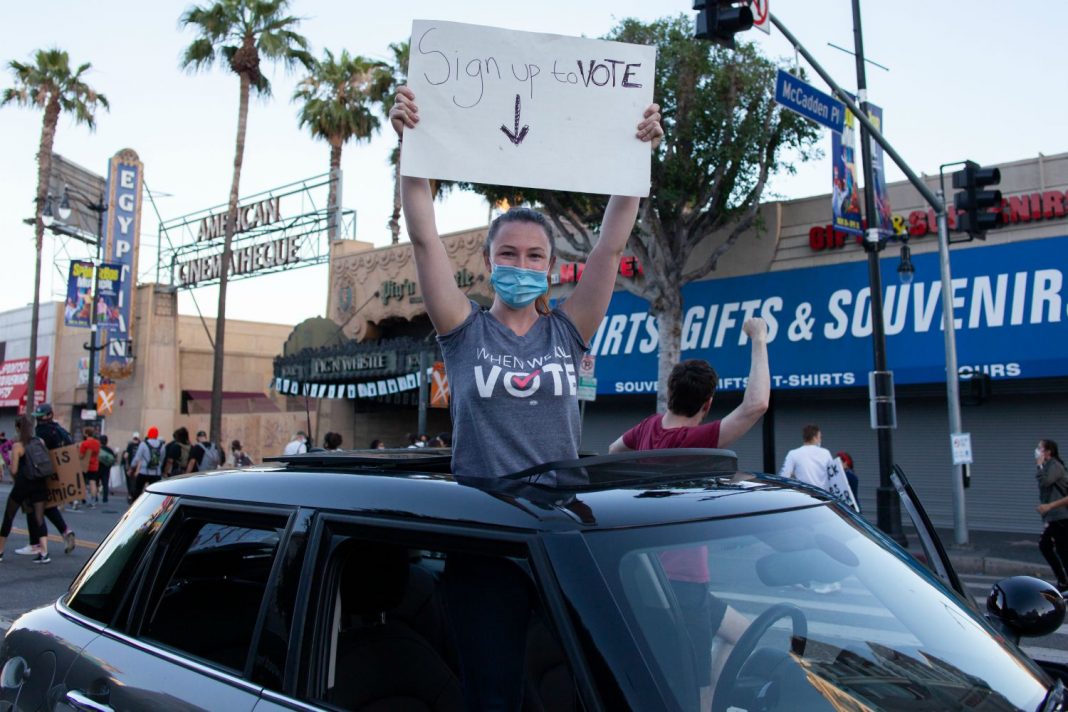 Established activists and spur-of-the-moment volunteers are seizing on this unprecedented moment of community uprising to register voters in Los Angeles. It’s been upward of two weeks since George Floyd was murdered in Minneapolis, and citywide protests against institutional racism in policing and the criminal justice system continue. And while the protests themselves have proved effective at instigating change, many believe that the only way to make that change permanent is through the ballot box.

“If we get politically organized, [we can] make sure that our city charter is in alignment with the people’s demands,” South Central activist Tara Perry told a crowd on the steps of City Hall on Friday. “But you can’t demand nothing if you don’t register to vote,” said Perry, who began registering voters at the protest the next day. “Don’t let this shit happen again. The onus is on us, people.”

Weeks before the nation erupted in protests, L.A. Mayor Eric Garcetti prompted an uproar from activists over his budget proposal. Garcetti’s $10.5-billion budget made cuts to many agencies and services in response to the dismal economic prospects brought on by COVID-19. The budget called for furloughs of nearly 16,000 civilian employees, saving the city $139 million, according to Garcetti’s financial advisors.

Activists quickly pointed out that Garcetti’s budget awarded an increase of 7 percent to the Los Angeles Police Department—53.8 percent of the city’s budget not already allocated to other purposes. This included a package of raises and bonuses for officers.

Days after protests broke out in L.A., including an action staged in front of his Hancock Park home, Garcetti made a concession to activists’ demands and agreed to cut $100 to $150 million from the LAPD’s budget.

“I think a more realistic number to create real change is $1 billion,” Perry said in an interview.

Issues like city funding are wonky and it can be hard to gin up much general interest, but activists are hoping to seize on the focus on local matters.

One local contest that’s getting the lion’s share of attention is the race for District Attorney. At that same protest, activists lead the crowd in chants of “Fuck Jackie Lacey,” referring to the current L.A. DA.

Lacey has served as District Attorney since 2012. During her tenure, more than 400 people have been killed by L.A. law enforcement or died in custody, and according to Black Lives Matter L.A. Lacey has only charged one officer, sheriff’s deputy Luke Liu, for shooting an unarmed man while on duty. Yesterday, she charged officer Frank Hernandez for repeatedly punching an unarmed homeless man in Boyle Heights.

After a hotly contested primary election in March, Lacey is headed for a November runoff against former San Francisco DA George Gascón, who is running as a progressive alternative to Lacey.

The voter registration push has yielded big results all over the country. When We All Vote, an organization co-chaired by Michelle Obama, saw a 70 percent uptick in online donations in a single week. Latino voter groups like Mi Familia Vota are making strides in key states like Arizona, Florida, Nevada and Texas. And Rock the Vote reported 50,000 new voter signups between Monday, June 1 and Friday, June 5; 70 percent of the new registered voters are under 30.

RELATED: Black Lives Matter Estimates that as Many as 100,000 Protesters Gathered in Hollywood on Sunday