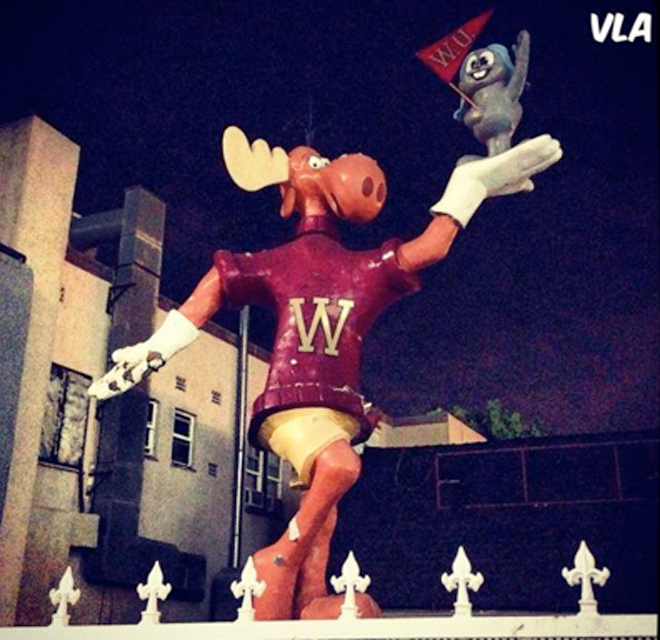 On September 24, 1961, a gigantic revolving sculpture of the cartoon stars Rocky and Bullwinkle was erected across the street from the world famous Chateau Marmont Hotel, in front of the studios of Jay Ward Productions. It was a parody of the Sahara Hotel billboard, which featured a revolving Cowgirl. What else could you expect from a city built on whimsical novelties? Long after, the Cowgirl was replaced by an even larger and more imposing Marlboro Man billboard, but Rocky and Bullwinkle hung on for dear life, and for more than 50 years, they were the Statue of Liberty of the Sunset Strip.

In fact they continued to rule the strip in the hearts of locals and tourists alike, even after Jay Ward Productions shut down in the ’90s. They made appearances in dozens of movies and commercials (including this clip from the film Mondo Mod), taking second billing only to the Hollywood Sign, and they were seen in printed L.A. souvenir tour guides for decades. I can’t think of another object that made more of a California statement, and was more beloved, than this statue.

I live in the city of West Hollywood and enjoy evening walks. My usual destination? The Sunset Strip—Rocky and Bullwinkle were basically my GPS points.  One of my earliest memories is of Jay Ward giving me a balloon at his eccentric gift shop, which was just east of the statue and named The Dudley Do Right Emporium (where Pinches Tacos is today), after my mother purchased a “Super Chicken” cell for me. I thought of that every time I passed my favorite Moose and Squirrel on foot. Even though it had been painted over several times, and experienced bad weather conditions and various earthquakes over the years, I never imagined it would one day be gone. Rocky and Bullwinkle being taken away

On July 22, 2013, Jay Ward must have been rolling in his grave. The statue had vanished! Vintage Los Angeles broke the news after an Instagram video was taken of the statue’s jarring removal (captured on camera by Tristan James Butler). There was no explanation or reason announced about its removal. Were Boris and Natasha operating the crane? When I posted the video, thousands of concerned and sentimental Vintage Los Angeles followers demanded answers. On the day Rocky and Bullwinkle disappeared I called The Sunset Strip Association and the Los Angeles Conservancy, but nobody had any information. The people I spoke with were just as surprised to see the statue go as I was.

VLA has been tracking this story ever since, and all kinds of rumors have been circulating. I’ve heard that it may be getting restored for the DreamWorks Animation’s upcoming film Mr.Peabody and Sherman. There’s also continuous chatter about it being placed at Santa Monica and Doheny or the Academy of Television Arts and Sciences. Who knows, maybe it will wind up next to Paul McCartney’s stolen Sunset billboard head. Nothing has been confirmed. All I know for sure is Dreamworks removed the statue after the owner of the property noticed it had a severe crack. Apparently it was too expensive to maintain and it will not be returning to its original location.

I’ve tried contacting Dreamworks, but they have yet to release an official statement about the statue’s whereabouts, their plans for the its future or its current condition.

That’s where Vintage Los Angeles comes back in. A week ago the mystery photo below was posted on VLA with this message: “The end of a chapter or the start of a new one? The staff shop, Warner Brothers Studios.” I’m pleased to think we haven’t seen the last of Bullwinkle yet. If the city of San Francisco can refurbish and relocate a Doggie Diner head then surely Rocky and Bullwinkle deserve the same. Here’s hoping they don’t end up in a storage unit like the Tail O’the Pup.