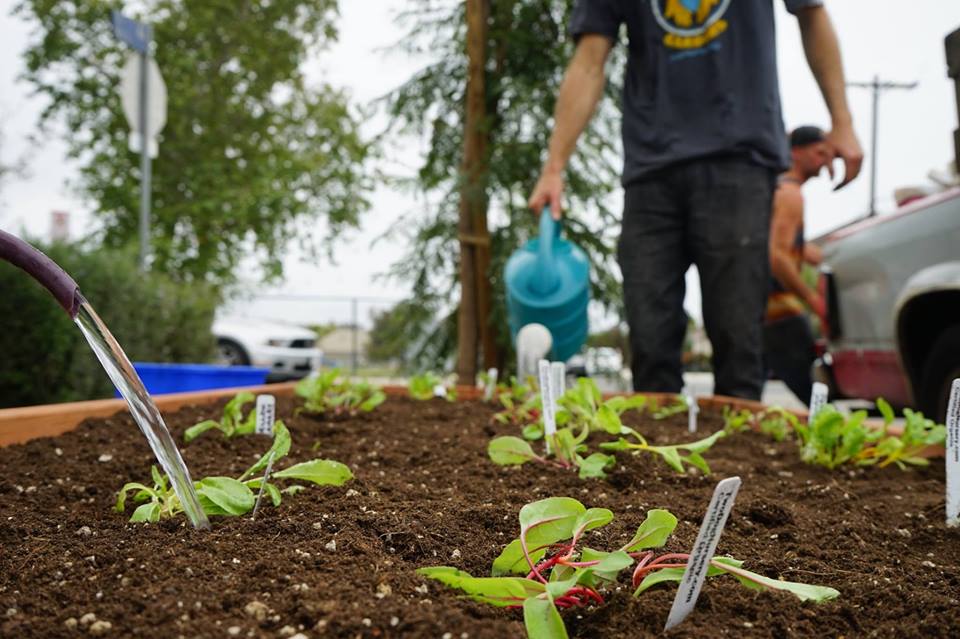 Late last month, a group of protesters gathered on a street corner in Venice to demonstrate against what might sound like an unlikely foe: planter boxes. While planters might seem innocent enough, activists believe the items were constructed with the intent of displacing homeless people who had been sleeping on sidewalks in the area, particularly along Harding Avenue.

Community activist Adam Smith was one of the organizers of the protest, along with a homeless man named Joe, who lives on a sidewalk in Venice where some of the planters were recently installed.

“On Sunday November 4, a posted ‘sweep notice’ said the Department of Sanitation would be doing a cleaning of the sidewalk on Wednesday November 7,” Smith says via email. “Right behind the Department of Sanitation and LAPD was a crew in a truck to install planters along that stretch of sidewalk. This crew worked without uniforms and in an unmarked truck, but the company that has been installing these all over Venice, under the guise of ‘beautification,’ is a non-profit called Community Healing Gardens.”

Some protesters in Venice say newly-installed planters are designed to push out the homeless under the guise of beautification. pic.twitter.com/3emJNcmLyI

Community Healing Gardens, a local nonprofit co-founded by long-time Venice resident Nicole Landers, contests this claim. Landers asserts that the charity started as a response to the influx of “big tech” in Venice and, in fact, shares many of the protesters’ concerns about gentrification and displacement.

“What binds us all together, one thing we all have in common as people, is food–and finding a way to be healthy when things are so expensive,” Landers says. “Beautification might be a fine idea, but it’s not what we’re in this for.”

The Community Healing Gardens boxes are planted with edible vegetables that are donated to the homeless, and many homeless people are involved in the gardens’ care.

“Harvests from the raised garden boxes are given to the St. Joseph Center’s Bread and Roses work experience kitchen, where 100 meals a day are served to men and women who are homeless or transitioning back into society going through their program,” she says. “Also, we employ locally, and currently a few team members came out of the culinary program at St. Joseph’s Center. We work directly with homeless and transitioning men and women.”

Instead of using Venice’s municipal water supply, Community Healing Gardens’ boxes are irrigated by a local green tech company, SkySource, which is working on a sustainable solution to turn biomass waste into clean water.

The story of Community Healing Gardens was retold in a TEDx talk Landers delivered at a Venice event. Video of the talk was posted to YouTube in November, just days before the anti-planter protest that named her organization as the source of the unwanted boxes.

The planters that the protesters object to have succulents and cacti, not the vegetables central to Community Healing Gardens’ mission, and are often metal vessels rather than wooden.

As for who is responsible for the succulent planters, Landers says she has heard rumors in the community that they may be linked to newer Venice residents or business interests in the areas where they have popped up, but declined to name any specific individuals or organizations.

“I understand that people pay millions of dollars for these houses and they want things to be a certain way,” she says, “but, honestly, this is how Venice is, and maybe they shouldn’t have moved here if they weren’t comfortable with an eclectic community.”

Don't know what part of Venice you live in, but the planters on Riviera&Windward actually made it safe again for the kids that live here, to walk to the grade school down the street w/out being blocked&harassed by addicts. I put kid's safety 1st on this one.

Not everyone agrees with that vision for Venice. Smith recalls that during the protest, one motorist circled and shouted “More planters!” in an attempt to antagonize the demonstrators; pro-planter posts also surfaced on social media. And, of course, someone is paying to set them up.

One grouping of the metal planters, located near a Staples store about a half mile down Lincoln Boulevard from the site of the sweep that triggered the protests, has been linked to the owners of Lincoln True Value Hardware and Venice Stakeholders Association President Mark Ryavec. Local blog Venice Update reported that the hardware store put up $7,500 for the planters, and Ryavec an additional $250 for plants.

Los Angeles was able to independently verify Lincoln True Value Hardware’s involvement in the planters near the store’s location, including that the 17 metal containers were special ordered from a distributor and a crew of workers was brought in to install them.

The Venice Stakeholders Association has been active recently in opposing the construction of a bridge housing facility at 100 E. Sunset Ave. and circulating a petition calling upon the city to conduct sweeps of Venice Beach every night. However, neither Ryavec nor the association could be contacted directly regarding the planters. The address listed on public filings as the headquarters of the association appears to be a residence that is a short walk to both locations of planters.

Part of the difficulty in confirming who is putting out the planters is that no public authority appears to have issued permits for the boxes. Councilman Mike Bonin’s office did not respond to requests by Los Angeles for comment. Activist blog Capital & Main reported in July that a representative from the West L.A. office of the Bureau of Engineering told a reporter that, at least at that time, the Venice planters did not have permits, and that “no portion of the public right-of-way, including sidewalk, is allowed for private use.”

Regardless of who is behind the planters, Smith says building them isn’t a long-term solution to the problem of people being without homes in Venice.

“People that are mad about people sleeping on the streets should channel their anger toward (Mayor Eric) Garcetti and City Council,” he says, pointing to the city’s failure to deliver as much housing as was originally proposed when voters approved Proposition HHH. Three HHH-funded projects have begun construction, and the 154-bed bridge housing center opposed by Venice Stakeholders Association was recently approved by the City Council.

In a statement about the new housing development, Councilman Bonin wrote, “Throughout Los Angeles, people are demanding an end to the status quo of encampments in our neighborhoods. They are insisting on housing and shelter, and on visible progress in getting people off the streets.”