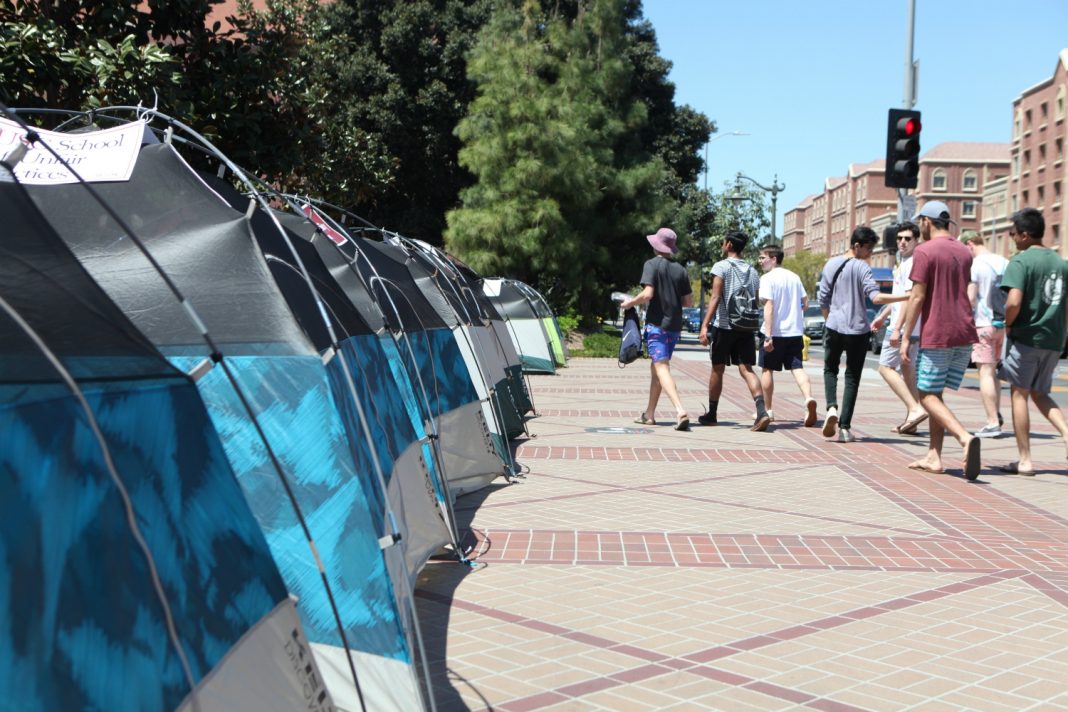 For the past nine years, USC has hosted the L.A. Times Festival of books, a staple of the springtime social calendar, without incident. On Saturday, as in the years before, thousands of Angelenos poured onto the university’s campus, which is transformed into an amusement park for bibliophiles.

But even as visitors sought a weekend diversion, USC itself failed to escape the pall of recent brushes with scandal and criticism—this time from a collection of groups representing faculty, students, staff, and residents of neighboring communities. A row of tents greeted attendees as they passed onto the campus, along with dozens of protestors carrying signs that said “USC School of Unfair Practices” and “USC Be A Good Neighbor.”

As of yesterday, organizers said the tents would remain in place for the duration of the festival and beyond. As long as it takes, they say, until USC meets their demands—and there are a lot. Even while the sight of the tents draws attention to issues of gentrification and displacement, the broad coalition of groups have an equally broad assortment of demands, all connected by a general dissatisfaction with what they view as a systemically greedy, corrupt institution.

For Bill Russell, a graduate student in the Film and Media Studies department, that means having a say in the governance of the school and the benefits he receives as a grad student. “USC just hired a new president after the last one resigned in disgrace…and we were given no input into the process,” he says. “It was just announced from on high.”

“Yet, at the same time, they are actively preventing us from forming a student union, from collectively bargaining for living wages, for the benefits that we need,” says Russell, who shares that he makes “just above food stamps.” Even while he works full time, he says, his spouse does not receive health insurance on his plan, putting their plan to start a family on hold.

The school has opposed efforts to organize by other groups as well, according to Mike Long, the senior communications coordinations for Service Employees International Union (SEIU) Local 721. “Three years ago, faculty voted to form a union in a landslide, and instead of bargaining with them and respecting that collective voice, the university has sworn to keep fighting it in court.” In March, a federal appeals court dealt a setback to unionization efforts among non-tenure track faculty by sending a positive ruling by the National Labor Relations Board back to the board to review.

Even with that legal victory, USC has weathered scandal after scandal, exposed largely via reporting by the Los Angeles Times. In July 2017, the Times ran an explosive story about then-dean of the Keck School of Medicine, Carmen A. Puliafito, detailing a life of hard drug use and sordid behavior. A subsequent Times story revealed that the university had received questions about the dean’s conduct a year prior to the story breaking.

Puliafito’s replacement, Rohit Varma, was fired only months later after the Times revealed that USC had settled a sexual harassment allegation against him for $135,000.

Then, in 2018, another sweeping Times investigation found that a campus gynecologist, George Tyndall, had conducted improper pelvic exams and made inappropriate comments to his patients. While Tyndall is now the center of the largest sex abuse investigation in LAPD history, USC had received complaints about him for years prior to the Times story and had taken no action.

Further cementing the school’s problematic reputation, in February, six male USC alumni who identify as LGBTQ filed a lawsuit accusing a campus men’s health doctor of sexual abuse. The suit names USC as a defendant, alleging negligent hiring and supervision on the university’s part. USC did not respond to requests for comment on the protests. 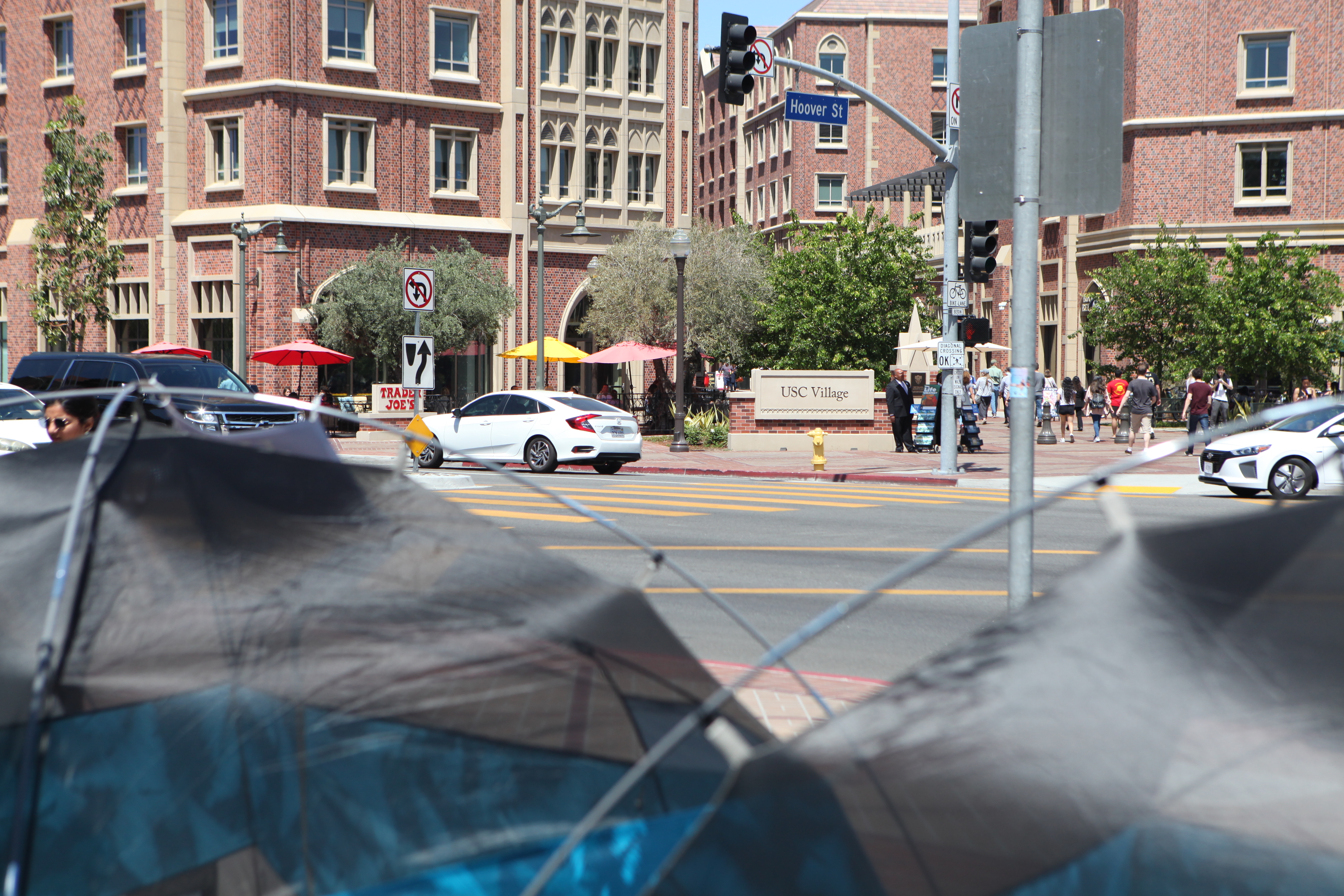 The location of the protest—right across from the hulking $700 million development, USC Village—pointedly gestures to another grievance of the protesters: the displacement of community members accelerated by the school’s expansion. “We’re demanding that USC be held accountable for the things that are happening around the community,” says Luis Ocampo, a lifelong resident of the area and a member of the Alliance of Californians for Community Empowerment. Seeing opportunities to turn a profit, Ocampo says that investors have been buying property in the neighborhoods surrounding USC, pressuring tenants out. Then, after remodeling the units, they offer the spaces to students at higher costs.

Luis points to the Village over his shoulder. “They used to pay really cheap rent there,” he recalls. Only three years ago, tenants would only pay $600 a month for a one bedroom. “Now, for the same apartment, it’s actually $1,200.”

Rent for his South L.A. apartment hasn’t changed much, he says, but he can already see evidence of creeping gentrification. He checks the cost of units in his neighborhood as they come onto the market and has seen a definite upward trend. For those who own their houses, they field the attention of developers and real estate flippers looking to knock down older structures and build something that can fetch a high price. “One of the main reasons is because USC is close, the Colosseum is close,” Luis explains.

While new developments often set aside a number of units for low-income housing, the quantity simply doesn’t satisfy the need. Luis’s name has idled on the waiting list for the Lorenzo, an upscale development near the school, for over five years. A friend of his managed to snag an apartment that she shares with her family. She camped in line outside the leasing office just to get an application.

The protest was also joined by undergraduate students, including seniors Shany Ibadi and Kameron Hurt.

Hurt has been organizing around campus issues like “the over policing of our campus, the lack of adequate resources for mental health or sexual health, [and] cultural centers being stripped of their funds.” While he receives some financial assistance, he has still had to take out tens of thousands of dollars in student loans.

Ibadi, who has been active in campaigning against sexual assault, sees the diverse list of issues as inherently connected.