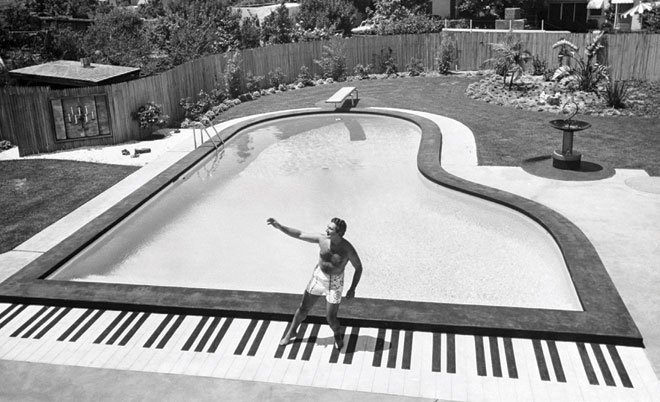 Michael Douglas will tickle the ivories—and HBO subscribers—as Liberace in Behind the Candelabra, the long-awaited biopic directed by Steven Soderbergh that premieres on Sunday. The flick captures the Glitter Man and his tumultuous romance with his former chauffeur (played by Matt Damon) in Palm Springs circa the 1970s, but Liberace’s earlier L.A. exploits pack plenty of dramatic flair. The famed pianist had a knack for real estate, shelling out for a 28-room mansion in the Hollywood Hills, a penthouse apartment on Beverly Boulevard, and Malibu digs on PCH. Most famous, however, was the home he owned in Sherman Oaks. Liberace moved into the Valley suburb in the 1950s and transformed the house: He adorned a fence with musical notes, added a fountain that played tunes, and built a piano-shaped pool.

The entertainer lived there at the height of his fame and found himself too accessible to fans, so he began spending more time in a desert home he purchased, leaving behind his mom and two brothers. He visited often—especially after his mother was attacked by two men, allegedly in connection with a lawsuit Liberace had filed against the tabloid Confidential for a story called “Why Liberace’s Theme Song Should Be ‘Mad About the Boy’. ” He sold the house in 1959, and it remains an iconic tour stop in the Valley.