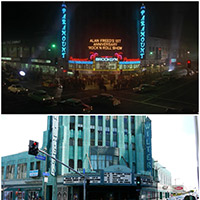 I have always been of the mindset that one should embrace being a tourist in their own city. So when I was offered the chance to go on Starline’s new Movie Locations Tour, produced in conjunction with Turner Classic Movies, I jumped at the opportunity. The tour takes place in a large bus custom outfitted with stadium seating, panoramic windows (many of which are retractable to allow for better picture-taking) and a 65-inch high-definition TV that plays clips of each movie mentioned during the three-hour journey.

Prior to embarking upon the TCM Movie Locations Tour, I was a bit apprehensive as Hollywood tours are nefarious for propagating erroneous information. I needn’t have worried, though. Steve, our guide, knew his stuff! He was informative, engaged, and passionate about movies. I consider myself a location and movie expert, but even I learned a few things along the way. (Did you know that Gene Autry is the only person to have five stars—one for each category—on the Hollywood Walk of Fame? I didn’t!)

The tour kicked off in the back parking lot of the TCL Chinese Theatre and headed through downtown Los Angeles, Echo Park, Hollywood, and Angelino Heights. We ventured by more than 50 filming locales, quite a few of which I had not previously been aware of.

I was shocked to learn that the exterior of the Wiltern theatre, located at 3790 Wilshire Blvd. in Mid-City, masqueraded as Brooklyn’s Paramount Theatre, where Ritchie Valens (Lou Diamond Phillips) played one of his first professional gigs, in La Bamba. I am familiar with the Wiltern (my favorite singer, Michael Buble, recorded a live concert there for an episode of PBS’ Great Performances in 2005) but I never realized the place had made an appearance on the silver screen. A screen capture from La Bamba (top) and a photograph of the Wiltern theatre, taken in July 2014, courtesy of Lindsay Blake (bottom).

I also picked up a few spots from the Tinseltown of yesteryear. While I love Old Hollywood, I am not very proficient in locations from that era, most likely because the landscape of Los Angeles has changed so drastically since that time. The TCM tour included many locales from senior films, though, which I was thrilled about. We were driven by the former Hollywood headquarters of Howard Hughes’ enterprises at 7000 Lorraine St., which is still standing to this day, relatively unchanged. I hadn’t known the place existed prior to the tour, but it has appeared onscreen several times, perhaps most notably in the 1951 film noir Cry Danger, which Hughes produced (the offices are where Nancy, played by Rhonda Fleming, worked). It was pretty exciting to drive by the historic building while a clip of the Cry Danger scene filmed there more than 63 years ago played on the screen in front of us. A screen capture from Cry Danger (top) and a photograph of the former Howard Hughes headquarters taken in July 2014, courtesy of Lindsay Blake (bottom).

The tour also covered contemporary movie locations, including The Jim Henson Company Lot at 1416 N. La Brea Ave. in Hollywood. I have done plenty of research on the notable site in the past, so I knew that it formerly housed Charlie Chaplin Studios and A&M Records, and was where Michael Jackson and a bevy of music luminaries recorded “We Are the World” in 1985. But I had no idea that the property had appeared onscreen in the 2011 comedy The Muppets as the decrepit Muppet Studios. A screen capture from The Muppets (top) and a photograph of The Jim Henson Company Lot taken in July 2014, courtesy of Lindsay Blake (bottom).

A couple of other stops were included on the journey (yes, there is a bathroom break!), the first of which was at one of my favorite sites in all of L.A.: the Bradbury Building at 304 S. Broadway in downtown. The lobby of the architecturally stunning structure is an oft-used locale that has appeared in everything from 1982’s Bladerunner to 2012’s The Artist, in which it stood in for Kinograph Studios. The building’s intricate wrought iron staircase is where the up-and-coming Peppy Miller (Berenice Bejo) blows struggling movie star George Valentin (Jean Dujardin) a kiss. A screen capture from The Artist (top) and a photograph of the Bradbury Building lobby taken in July 2014, courtesy of Lindsay Blake (bottom).

Embarking on the TCM Movie Locations Tour was a fabulous experience, and a terrific way to get to know the City of Angels and its vast filming history. My review: Two very enthusiastic thumbs up!