Home Politics Scientists Are Trying to Figure Out Why People Are OK with Trump’s... 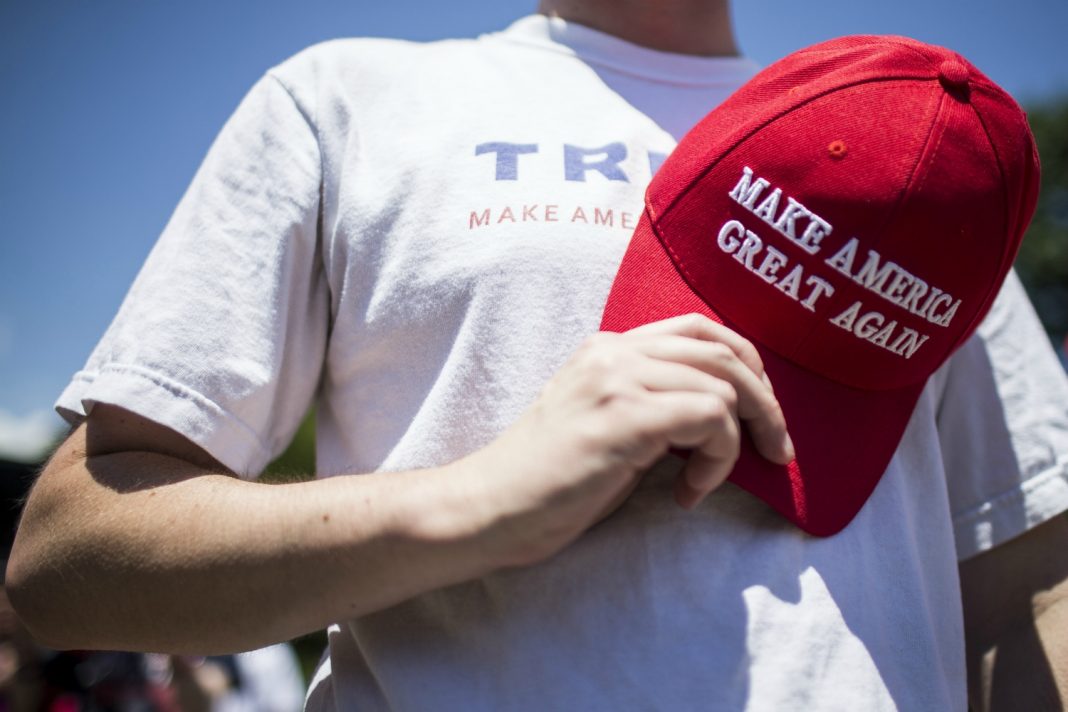 On November 6, while monitoring a Trump rally in Monroe, Louisiana, CNN fact-checking reporter Daniel Dale tweeted: “He is saying false/misleading/bizarre things in rapid succession, faster than I can type.” From the Ukraine scandal and the impeachment inquiry to chain migration and Chinese tariffs, the lies and unsubstantiated claims piled up like dirty laundry in a locker room.

Trump says the whistleblower's source probably does not exist, which makes no sense. He is saying false/misleading/bizarre things in rapid succession, faster than I can type.

All of those lies have already been uploaded to the Washington Post’s Fact Checker’s database. According to this lie detector in the sky, which has a time line that stretches back to Inauguration Day, Donald Trump is fast approaching an astounding milestone: 14,000 “false or misleading claims.” That’s an average of 22 lies a day, putting Trump in Munchausen territory.

An avalanche of falsehoods like that would usually kill any chance of a president winning a second term. That’s because the one thing that will drive presidential approval ratings south is lying to the American public. Trump, however, has been immune to this axiom.

Despite all the proven scandals and alleged high crimes and misdemeanors, despite the many strategic political blunders (foreign and domestic), despite the barrage of ongoing federal, state and congressional investigations (at least 16), Trump’s approval ratings have remained remarkably stable throughout his first term. After adjusting for the usual confounders that skew each individual approval poll—things like quality, recency, sample size, and partisan bias—Trump’s numbers have yet to dip below the low 40s.

Even more startling than the sheer number of POTUS lies is how brazen many of them have been. Dig deeper into this political phenomenon and something odd and counterintuitive emerges: Many people know that Trump is lying to them and simply don’t care. This raises a fascinating question: Could the president extricate himself from the Ukraine quid-pro-quo scandal, the linchpin of the current impeachment proceedings, by spewing one lie after another?

According to the academic paper Processing Political Misinformation: Comprehending the Trump Phenomenon, the answer is yes. Conducted prior to the 2016 presidential election, the study focuses on credibility experiments. Subjects were asked to rate their belief in eight statements (four true, four false) that Trump made during his campaign. Some were attributed to him: “Donald Trump said that vaccines cause autism.” Others had no attribution: “Vaccines cause autism.” Then came the fact checks. After false items were corrected and true items confirmed, the test subjects rerated the statements.

One of the findings confirmed what every FOX and MSNBC pundit already knows. When subjects first rated the veracity of true and false statements, Republican supporters of Trump believed the claim more when it was attributed to Trump; the opposite was true of Democrats. Republicans who were not pro Trump also believed less in statements attributed to him (but not to the same degree as Democrats), while their belief in the false statements was not influenced by attribution.

The other key finding is less obvious. There was a large bipartisan shift in belief after the fact check, suggesting that both conservatives and liberals can change their minds if they’re presented with convincing, unbiased information. But there was a catch: After a one-week delay, subjects partially “rebelieved” the false statements and partially forgot that factual information was true. Or, to quote the study: “Even if individuals update their beliefs temporarily, explanations regarding both fact and fiction seemingly have an expiration date.”

None of this bodes well for American democracy. Keep in mind it was impossible for the test subjects to avoid all those fact checks. How many swing state voters are actually monitoring watchdog sites like FactCheck.org or Politifact.com? The last sentence in the study’s abstract sounds more like a 2020 warning than a clinical observation: “These findings suggest that people use political figures as a heuristic to guide evaluation of what is true or false, yet do not necessarily insist on veracity as a prerequisite for supporting political candidates.”

The same research team has already “replicated and extended” this original work. The title of their new study, published this year in Political Psychology, strikes the perfect balance between the corner bar and the ivory tower: They Might Be a Liar, but They’re My Liar: Source Evaluation and the Prevalence of Misinformation. Dr. Briony Swire-Thompson, the lead author on both papers, told me that while the data is consistent, more research will be required before a unified field theory on mendacious politicians is ready for peer review. “We’re still trying to tease apart the mechanisms behind the phenomenon,” says Swire-Thompson, “but it is likely to be far more complicated than simple tribalism.”

That the president has inspired such scientific inquiry is surprising but perhaps inevitable. Here are some more psychological studies that plumb the depths of “post-truth” politics and cognitive bias in the age of Trump:

Takeaway: “Citizens can accept the conclusions of journalistic fact-checks of misstatements even when they are made by one’s preferred candidate during a presidential election. This information had little effect on people’s attitudes toward the candidate being corrected, however. In other words, Trump supporters took fact-checks literally, but not seriously enough to affect how they felt toward their preferred candidate.”

Takeaway: “Support for a lying demagogue is not simply a desire to ascribe positive characteristics to a preferred candidate. These Trump voters could have viewed him as warm and sincere, but they did not. They also could have chosen to justify his lie by insisting that it was true. Instead, they justified it as a form of symbolic protest, viewing him as increasingly authentic the more they did so.”

These credibility experiments have even spread to other countries. Does Truth Matter to Voters? The Effects of Correcting Political Information in an Australian Sample is particularly insightful.

Takeaway: “Australians are far less likely than Americans to support politicians who are caught telling ‘myths.’” A ratio of four myths to one true statement is the tipping point where Australians change their view about a politician. With over 13,435 “false or misleading claims” to his credit, it’s doubtful that Trump would fare well with Australian voters.

Why do people have such a high tolerance for the president’s myths? This is particularly perplexing considering that these myths are as likely to be, as one research team labeled them, “common-knowledge lies” (e.g., the easily disproved claim that Trump’s inauguration crowd “went all the way back to the Washington Monument.”) as “special-access lies” (e.g., the difficult to disprove pre-Mueller report claim that Trump had “never done business with the Russians”).

Dan Ariely, a Duke psychology professor and the author of The Honest Truth About Dishonesty: How We Lie to Everyone—Especially Ourselves, says Trump’s continued popularity is no mystery. “People don’t mind so much if their politician lies because they think it’s for the common good,” Ariely says. “And politicians liberate themselves from the shackles of morality by thinking: If I was elected, people would be better off.”

The ethical quandary is obvious and inescapable. The wavering tone of Ariely’s voice suggests he is both intrigued and troubled by Trump’s casual relationship with the truth. “If you’re a politician who lies to get elected, how do you weigh honesty versus the good of the people?”

RELATED: Donald Trump Has Decided That Hollywood Is Racist Against Right-Wingers