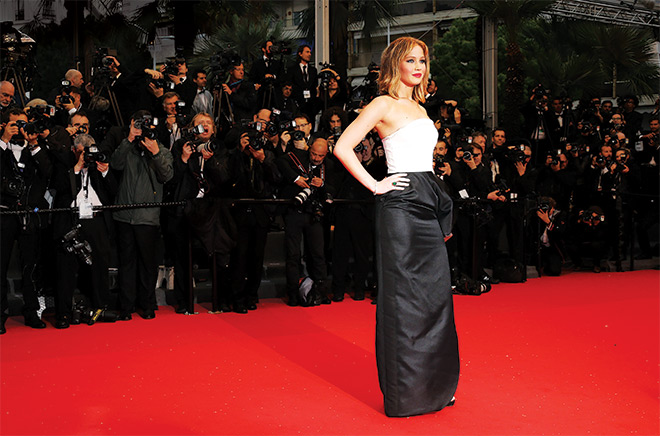 There was a gasp-inducing, ultimately amusing moment at the Oscars last year. That’s when Best Actress winner Jennifer Lawrence tripped while ascending the stairs to accept her award, a shoe entangled in the folds of her voluminous pink gown. She didn’t fall flat, and she came up smiling. You could see the tomboy underneath the frilly prom princess dress. When asked backstage by the media hordes what had gone through her mind as she pitched forward, she replied in her signature slightly husky voice, “A bad word that I can’t say that starts with F. ”

Oh, the little toughie. She is that onscreen and off, and I, among many, am smitten. I cannot remember when I was so struck by a young actress. I hear the same from all my female friends; Lawrence is captivating an entire gender. In interviews she is frisky and unguarded and has that easy, joshing style that usually only male stars employ. She seems to be centered in her own skin, not preening and posing and flirting and giggling. Laugh she does, but it’s hearty. She is deliciously, sometimes bawdily spontaneous, talking about being nervous and sweating and drooling.

In a chat with Barbara Walters she said, “It should be illegal to call somebody fat on TV.” Not only is Lawrence speaking up for her sex, she also isn’t threatening to women. To them she’s cool, in a down-to-earth way that’s never self-conscious. You want to hang out with her. You want to be her or at least emulate her, not because she is a major, often glammed-up movie star but because she has a freedom about her, a zest, a willingness to be goofy and unself-censored. None of that careful, canned, feminine stuff. Of course the roles she’s chosen only up the allure, Katniss Everdeen being at the top of the list.

I hadn’t expected to like The Hunger Games. I am talking about the first movie. I did not read the books, had no interest in them, even though I recognized them as a phenomenon. But I finally succumbed to seeing the film, carried off by a friend. What a surprise. The conceit—as everyone knows by now—is malevolent and silly, young people pitted against each other for the salivating pleasure of psycho adults. Yet in the middle of the kill-or-be-killed contest, there was Lawrence, indomitable with her bow and arrow, always the believable heroine. She held her breath; I held mine. I wasn’t thinking “technique.” I wasn’t swooning in response to the gifts of a Cate Blanchett or a Meryl Streep—both beyond admirable and wickedly good—one of them nearly twice her age, the other four decades older.

For me Lawrence has that something extra, the ineffable quality that bubbles up from inside. Even as she goes quiet on the screen, you can’t look away. When she’s being strong, it’s not in a cartoonish Lara Croft way but in an assertive, convincing manner. She can turn on a dime, cry and kick butt, empathize and rage from one frame to the next, as she does in installment two, The Hunger Games: Catching Fire. I like that, and I like what it says to ordinary women looking for a cinematic role model.

Is what we are seeing with Lawrence simply the freshness of youth, that first burst of raw talent, someone who isn’t yet onto her own tricks, as it were, and who hasn’t honed her shtick? Lawrence says she has never taken an acting class. Eschewing formal training might, in fact, be a plus in the case of quite a few people. But then again, most of them won’t have Lawrence’s brass-tacks security of choice, her honesty.

You can go back and watch the movie she received her first Oscar nomination for, Winter’s Bone, and see her intent early on, a determination to be real, which is to me the highest accolade for any performer of any age. Playing a 17-year-old trying to hold her fatherless family together, she is wholly present in that bleak, hardscrabble landscape of the Missouri Ozarks, a place of deadbeat parents and meth labs. Her accent doesn’t slip around; it isn’t affected. She doesn’t sound as if she worked for hours with a speech coach, something my ear always gets testy about. In fairness, Lawrence is a native of Louisville, Kentucky, so it may not have been much of a reach. Still, what a pleasure to hear an actor sound—and seem—so authentic. There is a naturalness to her screen persona, whether she is playing a backcountry teenager or the dopey, floozy wife of Christian Bale’s con man in one of the year’s most nominated films, American Hustle.

Director David O. Russell clearly has a thing for Lawrence. She won her Oscar for his Silver Linings Playbook. He is unquestionably gifted, but I am not persuaded by his movies the way many seem to be. They just seem too cute and clever and sentimental and—not real. He specializes in the au courant brand of heart-tugging, quasi-comedic quirkiness exemplified by a movie like Little Miss Sunshine, though he wasn’t responsible for that bit of whimsy. The darkness isn’t dark enough, and the humor isn’t humorous enough. But Lawrence makes the films watchable—more than. You wait for her to come back whenever she is offscreen. In American Hustle she doesn’t have the primary female role; that belongs to Amy Adams, who gives it her accomplished, cleavage-baring best (forget cleavage; her breasts are pretty much on display, right down to the nipples). She strips and struts, smiles and connives. But it is Lawrence, with her profoundly un-Katniss-like ditziness and frothy blond hair—and yes, also bouncy boobs—who lights up the screen. Julia Roberts, in her first big roles, had the same buoyancy. So did Scarlett Johansson, who was luminous out of the gate and is currently fetching as the disembodied voice in the movie Her.

It will be exciting in the years ahead to see Lawrence turn other corners, go all-out soft or all-out funny. I suppose I could bear to see her in a Judd Apatow guffaw fest, though my longing is to see her stretch out big in a grown-up story. In my fantasy a splendid young female playwright or screenwriter will create a work so smart and true—not a trivial rom-com, please, not for this talent—that comes from deep inside, where the emotional stakes are high. That’s why The Hunger Games works. Perhaps Kathryn Bigelow could take on the domestic side of the recent wars, with Lawrence as the wife of an unhinged vet suffering from PTSD (Bigelow could option David Finkel’s wonderful book Thank You for Your Service) or as a young woman trying to survive in the new energy boomtowns of North Dakota or Nebraska, visceral Americana. I would love to see her work with Richard Linklater, given his beguiling trilogy, the “Befores,” as I call them (Before Sunrise, Before Sunset, and Before Midnight), featuring the French actress Julie Delpy—who, come to think of it, also radiates a kind of fierceness. On the other hand, I am hoping Woody Allen doesn’t make a professional pass at Lawrence, bending her to his hem-haw rhythms. Sorry, it’s just not a performance I want to experience. Nor am I eager to see her don a queenly gown and a tiara in service of one of those period pieces, though no doubt someone will be tempted to use her thus. And no remake of Cleopatra (I fear we might be due for just that).

I suppose Lawrence has failure ahead, too. But even in that, should it transpire, I am betting she will prevail. I will be there to watch.