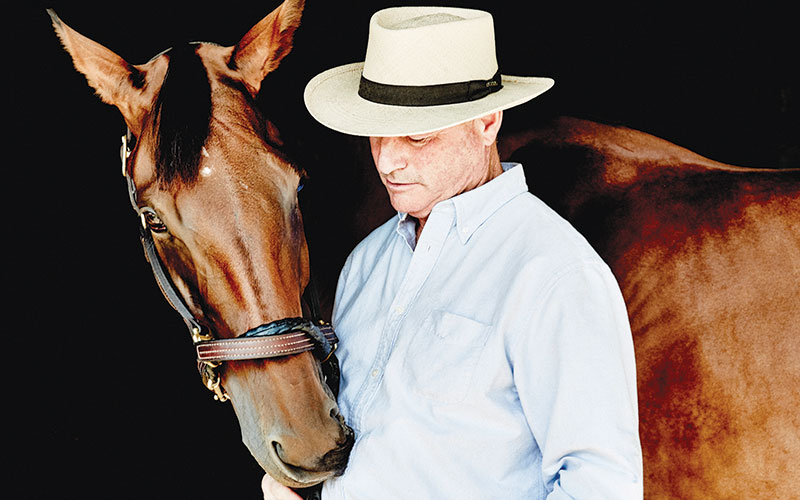 Each day Richard Mandella is well out the door before the sun comes up. It’s been like that since the Hall of Fame horse trainer was small, helping his blacksmith father on their ranch  in La Puente, the place surrounded by citrus orchards. Later the family moved to a ranch in the Inland Empire, and the young boy, already dreaming of a stable of his own, would follow his dad around as they mucked out the stalls, hoisting the wheelbarrow overhand because he wasn’t big enough to push it any other way.

Mandella, who was inducted into thoroughbred racing’s elite in 2001, has operated a public barn at Santa Anita since 1976. Dozens of owners—he currently oversees 40 horses, though he’s had as many as 75—entrust their equine holdings to him so he can physically and mentally prepare them to win prize money at major racetracks.

There’s also the prospect of large stud fees, should a stallion prove a consistent champion, and of nice payoffs for the offspring of successful mares. Mandella not only plans the animals’ workout regimens, but he must be vigilant about their health. Perhaps the most controversial aspect of racing is the wear and tear that occurs when 1,000 pounds of bones and muscle are carried on legs skinnier than a supermodel’s. “You try not to have injuries and to fix them when they’re small,” says Mandella. “You have to fix the little things to avoid the big ones. The big ones are devastating. You don’t want to be in that ambulance going down the track.”

RELATED: The Horses Are Coming

To that end he decides when to race a horse based on its fitness and looks for contests in which a young horse won’t be so overmatched that it’s a confidence-sapping experience: the psychological side of thoroughbred training. “Early in my career I thought the mental aspect of the training was equal with the physical part,” says Mandella, who lives near the Rose Bowl with his wife, Randi. “Being an older trainer, I’d say it’s more 70-30, that it’s more important to keep the mental part in line.”

As a trainer, Mandella, who’s trim and fit at 65 and rarely without his Panama hat, advises owners on which horses to buy and negotiates with sports agents for jockeys to steer their mounts. Once he was asked what it would cost for a yearling capable of being a top competitor. Mandella happened to be in the company of Max Gluck, a U.S. diplomat and thoroughbred breeder. Mandella remembers how he turned to Gluck, “who got a puzzled expression on his face and said, ‘Well, that could be $10,000 or it could be $10 million. There are no guarantees.’

“There’s a saying in racing that 20 percent of the owners, trainers, and horses make 80 percent of the money. It’s the prospect of being the 20 percent that keeps everybody in the game. But you have to ask yourself what you can afford to lose.”

Mandella has had more than one horse among the 20 percenters, most recently the celebrated mare Beholder. She was purchased for $180,000 and has earned $5 million. This month he’s likely to pit her against the best females in the Distaff at the Breeders’ Cup, horse racing’s richest weekend, which unfolds November 4 and 5 at Santa Anita. She’s six years old now, and thoroughbreds normally peak at three or four. A few famously defy that timetable; Zenyatta, for one, was still winning at six.

In the summer of 2015, in the marquee race at Del Mar, the million-dollar Pacific Classic, Beholder had trounced the boys, always a rare feat for a girl, and she had done it in spectacular fashion, by more than eight lengths. It was a different story this season, as Beholder ran with all her might but couldn’t quite catch California Chrome. The morning after her defeat, Beholder’s followers consoled her with peppermints—to which she is addicted—as she stood outside in a sunning pen constructed just for her. “You’re racing royalty,” gushed a woman in a pastel windbreaker, her husband nodding in the background. Another fan, wearing Zenyatta earrings, whipped out the red-and-white candies from her fanny pack. She travels from her Reno home to wherever the imposing bay mare competes.

Back at Santa Anita on a hot autumn day, Beholder is fidgeting in her stall, anticipating the arrival of her grain. Mandella chuckles as she gives her groom the bum’s rush after he dumps in the feed. “It’s the one time you’ll see her act sort of stallionish,” he says. Her stall holds pride of place outside his office. On a desk sits a purple-and-orange bucket—Beholder’s racing colors—inscribed with her name and brimming with peppermints. He’s circumspect about how he’ll race her this fall. There’s October’s Zenyatta Stakes, which she’s won three years in a row. Or he could possibly hold off and save her for the Breeders’ Cup Classic, where she’d go up against the top runners in the country. “But she doesn’t have to do that,” says Mandella. “She’s done plenty in her life.”

Horse breeds are categorized by how easily their innate flight response is triggered. In other words, how little (a paper flapping in the breeze, the bang of a gate) it takes to set them off running (in their minds) for their lives. There are the hotbloods, which include thoroughbreds; the warmbloods, exemplified by quarter horses; and the coldbloods, the draft horses. Mandella must daily engage the attention of the most excitable creatures in the equine world long enough for them to learn their jobs—to stretch out at a full gallop down a mile or so of dirt or turf more efficiently and energetically than the rest of the heaving herd around them.

That he grew up in a part of California where ranches outnumbered housing tracts certainly helped. After years of “rehabbing old horses and breaking yearlings” for his dad, he was hired at 16 as an exercise rider at Three Rings Ranch in nearby Beaumont, one of the largest thoroughbred operations in the state. He fixed it so that he didn’t have to arrive at high school until 10:30 in the morning. “My first class was P.E., and the coach knew what I was doing at the ranch, that I was getting plenty of P.E. there,” says Mandella. He worked at Three Rings from 4:30 until 10, then left school at 2 to work for his father late into the night.

By 18 he was in charge of the Three Rings yearlings, then took on a second job for W.R. Hawn, a founding partner of the Dallas Cowboys and a racing enthusiast with a farm in San Jacinto. At times the teenager was riding up to 30 horses a day. It’s likely that no other high-profile trainer is as well acquainted with the mind of a horse. “You’ll see Richard take his horses out and run them so that one day they’ll be on the rail, another time moving through a gap from the rear,” says Mac McBride, a longtime administrator at Del Mar racetrack, where Mandella had 30-plus horses stabled for the summer season. “He wants them to see how a race could look from every angle. That way they’re ready for it and don’t panic. He has them as well prepared as they can be.”

Mandella also came of age when there were well-patronized places to test a horse’s swiftness. In 1907, investor and entrepreneur Lucky Baldwin, besotted with the sport of kings, built a racetrack on his Santa Anita property. It burned five years later. The site’s value as a track was revived in the 1930s, after the state legalized pari-mutuel gambling, the system used in horse betting. By 1934, a stylish streamline moderne building designed by Gordon Kaufmann (the Hoover Dam, the Los Angeles Times building) and financed in part by studio chieftain Hal Roach was drawing huge crowds. The track is a marvel, its backdrop the textured San Gabriel Mountains, the colors that coat the hillsides deepening as the sun dips in the sky.

Across town in Inglewood, studio heads Jack and Harry Warner, Walt Disney, and Samuel Goldwyn had backed construction of another massive track, Hollywood Park, which opened in 1938. It closed in 2013. The blame for that and a general decline in crowds stem in part from online betting, which allows people to wager on live streamed races from around the country. “Instead of fighting traffic to come out and watch the races, people tend to just stay at home,” says Mandella. “So the on-track attendance is small.”

When questioned about the future of racing, Mandella recites the adage “The outside of a horse is good for the inside of a man”—the notion that looking into the eyes of a horse recalls an age-old bond. “Man and horse go back thousands of years,” he says. “And racing, with these beautiful parks in the middle of the cities, is the last gasp of that, men working with horses, women working with horses. If you take away these racetracks and that livelihood, you’re also destroying that last bit of connection, and you’re going to replace it with a lot of new homes or office buildings, and the world really doesn’t need more of that.

“These are big parks, where people can come spend a day, bring the family, have a picnic, have a little fun gambling. It’s a clean, well-run sport. You can find fault in it, just as you can anything in life, but that 1 percent of fault gets the headlines. The 99 percent of the soulful feeling between horses and people as they work together is irreplaceable.”