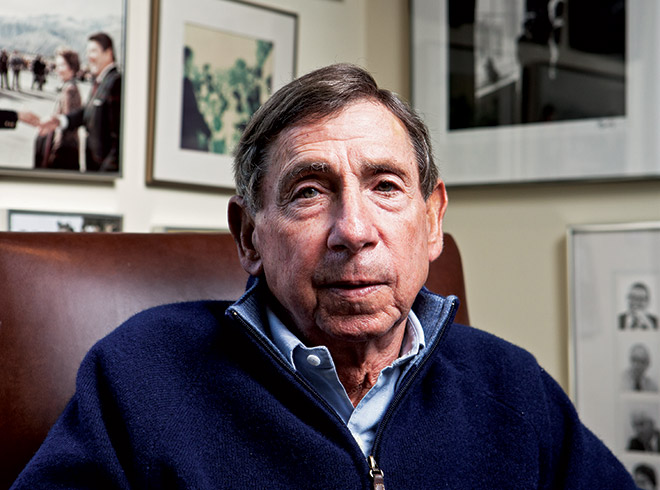 Mickey Kantor adores L.A. He is absolutely crazy about the place, the diversity of people, the colors of the bougainvillea, the tradition of the Dodgers. He smiles when he talks about the city, even gets sentimental, which might strike some as odd, given that he is the cochair of the Los Angeles 2020 Commission, which recently released a critical—some would say scathing—analysis of what ails us: “Los Angeles is barely treading water while the rest of the world is moving forward. We risk falling further behind in adapting to the realities of the 21st century and becoming a City in decline.” That’s for openers. The subsequent pages offer up hard numbers and strongly worded judgments detailing how our metropolis is failing itself, or rather how we are failing it.

Is it really so bad out there? I ask him as we meet for lunch to talk about his findings. We are at the Fairmont Miramar Hotel in Santa Monica on a luminous day, the sun shining on the Pacific. I have known Kantor for years. A small man who has had health crises and personal losses—his first wife was killed in 1978 in a plane crash in San Diego, and he lost a son a decade later—Kantor has a melancholic twinkle in his eye (the only worthwhile sort). A legal services lawyer turned major political player, Kantor chaired the 1992 Clinton-Gore campaign. Both tough-minded and tender, he is now focusing his energy on Los Angeles. What comes out—at least in the beginning—is not doom and gloom but rather his abiding affection for the city. A native of Nashville, he originally set foot here in 1973, when he was hired to run Alan Cranston’s reelection campaign for the U.S. Senate.

“It took me a year to understand that every day was not a vacation day, that because the sun was shining did not mean it was time to play,” he tells me. “The weather was perfect, and the people were all seemingly easygoing. They’re not really, as we know, but it looked like that. I thought the city could be one of the great ones of the world—was on its way to becoming that. After a year, I said to everyone, ‘I’m not leaving this place unless some president puts me in his cabinet.’”

That’s exactly what happened. After years as a partner in the Westside law firm of Manatt, Phelps, Phillips & Kantor, he was appointed by Clinton to be the U.S. trade representative. Off he went to Washington, returning to L.A. in 1997. “This city is home for me,” he says with emotion. “The people in it have been fantastic to me. This is a city of meritocracy. It comes as close as you can get. It’s not San Francisco or New York or Chicago, where you have to be connected. You just show up. They don’t care where you came from or where you went to college. They don’t give a damn who your family is or what your last name is. All they care about is what is relevant about you and who you are as a human being. That’s L.A. at its best.”

He is awed, too, by the intellectual and creative capital—the entertainment business and the top-notch universities. We have it all, he says, but we are not pulling together to deal with the serious problems that have taken root in paradise. “Sometimes it’s too easy here,” he says. “And sometimes it takes leadership,” which, the report states, we have been lacking. Thus the narrative turns. The passionate Angeleno becomes the brisk and wistful critic, acting not out of attention-grabbing peevishness but out of irritable heartsickness.

As a NATIVE who shares Kantor’s high-and-dashed hopes for this town, I have been carrying a deep sense of its squandered gifts. Haven’t we all? Look around: the traffic, the beleaguered schools, the unemployment, the people living on the streets. “We have too many homeless,” Kantor says with passion, “50,000 of them in the county. And we have among the highest unemployment of any major city in the U.S. Think about that. Only a couple have a more difficult poverty rate than we do. That should not be true of Los Angeles.”

We have let jobs slip away, specifically our share of the Fortune 500 companies. We should be all over Asia, importuning the big guys there to build in L.A. This needs to be a priority for us, he says. “New York has gained Fortune 500 companies, while we’ve lost them,” he says, growing intense. “They have 52 and we have 6. We have been asleep at the switch. Take Boeing. When they made it clear they were thinking about moving from Seattle last year, [former mayor of Chicago] Rich Daley was all over it. He called me to get the chairman of the board’s phone number. He didn’t have it, and I did. But no one in L.A. asked me to do anything.”

Though the Los Angeles 2020 Commission’s mandate was confined to laying out the city’s urgent issues—with a second report that will offer solutions in a couple of months—it’s clear that Kantor is filled with ideas. You can hear them rattling around inside him. “Why,” he asks, picking up the jobs thread, “don’t we turn part of the VA grounds into a technology campus? That’s what New York is doing with Roosevelt Island. Why aren’t we doing it?”

When it comes to schools, you can feel the same excitement and impatience. The report reiterates the grim fact that less than 60 percent of students in the Los Angeles Unified School District graduate from high school. To which Kantor adds: “We know our school years are too short. We know our school days are too short. We know that. Why don’t we change that? It’s in our power to do that. Why are our standards for administrators and teachers and students and parents so low? I am not saying any of this is easy. If it were, it would have been solved.”

Ditto the horrendous traffic. True, we are mounting mass transit efforts and adding freeway lanes—to the tune of $40 billion—but none of that is going to make much difference. There are too many of us ricocheting around in our cars. “I’m not a traffic engineer,” Kantor says, “but is the one-way-street idea so terrible it can’t be done? I am talking about major streets like Santa Monica Boulevard and Pico. I know small businesses object. I understand the merchants; they have a hard enough time making profits. But it’s hard to believe people won’t go around the block to get to a given place. And how silly it is that we have a train going to the airport that doesn’t quite get there. It stops like a mile and a half away. What are people thinking?”

At the heart of all this is something I have long noted: We don’t have a shared civic consciousness. Geography has a lot to do with that. Amid the vastness we hunker down in our own small places, digging in, succumbing to NIMBYism. One doesn’t feel that collective jazzed allegiance, say, of Chicago or San Francisco. We have a smart new mayor who talks about bringing the city together and who says he welcomes the message of the commission’s bracing summary. The question is whether he has the charismatic heft of a Rahm Emanuel or a Willie Brown. Can he rouse us and unite us to deal with these huge concerns? There is a large, often sluggish bureaucracy that has grown up within the city. Sixty-two percent of the budget goes to personnel. “We have automatic step increases for all these folks of about 5 percent,” Kantor says. “That’s too high. It’s killing us. What about the age of retirement for police and firefighters? Is it too low? Spending on pensions has gone up 25 percent every year over the past decade. There were three union heads on our commission, and they did not shy away from the strong language we used. I hope we can come together now on solutions.”

By the end of lunch, I am exhilarated and exhausted and frustrated and a bit hopeful. At least some concerned citizens are having at it. “We are going to get there,” Kantor says. “I am an eternal optimist. Chairing this commission and writing what we wrote is a little counterintuitive to my personality. But there was method to the madness. The message is: This is a great city; come on, let’s do something about it. If we had just gone off and written some nice things about L.A., no one would have paid any attention and no one would have addressed it. Maybe this will bring people together and they’ll start moving and we’ll get something done. That is my fervent prayer.”