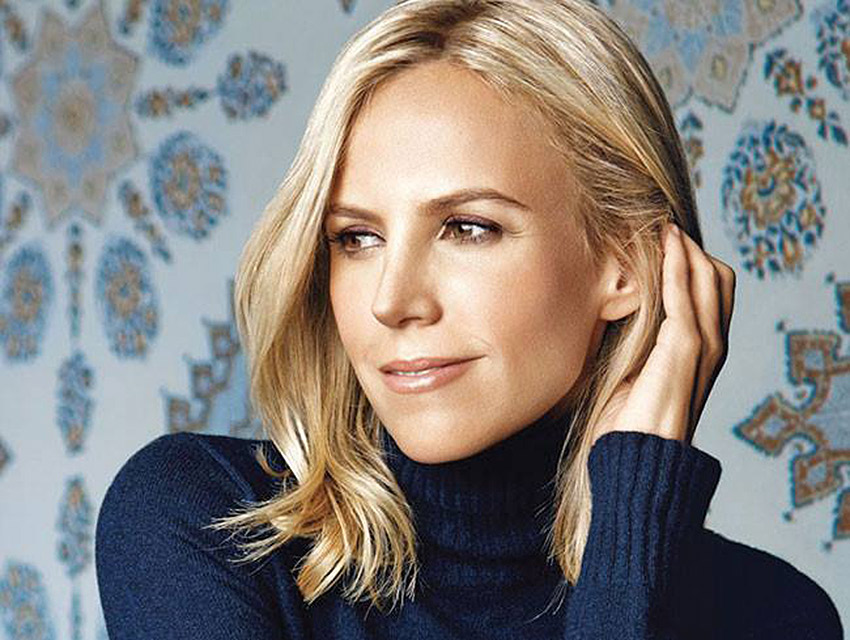 For those who’ve wondered if Tory Burch could possibly be as polished as the clothing she sells in her 100-plus freestanding stores, the answer is yes: the mother of three is enviably well-kept, her blonde hair perfectly smooth and her cocoa-colored eyes bright and calm. Her flawlessness would be annoying if she were any less humble, but her humility makes it easy to forget she’s a newly minted billionaire who’s running an $800 million company behind the scenes. (And to ignore her impeccable wardrobe.)

This morning, 150 guests gathered at the InterContinental Hotel in Century City to celebrate the arrival of her Elizabeth Street Capital initiative in L.A., which provides women business owners with low-cost loans from Community Development Financial Institutions (CDFIs). Named after Burch’s first store on Elizabeth Street in New York, Elizabeth Street Capital is the result of a partnership between the Tory Burch Foundation and Bank of America, the latter of which has pledged $10 million to nurture and develop female entrepreneurs. Mayor Eric Garcetti even stopped by to show his support, applauding Burch and Elizabeth Street Capital for adding to the 500,000 L.A. businesses already being run by women.

After participating in a “fireside chat” with Los Angeles publisher Erika Anderson, we sat down with Burch and Bank of America’s Janet Lamkin to hear more about the ways in which the Elizabeth Street Capital initiative will transform the entrepreneurial environment for L.A. women.

You initially launched Elizabeth Street Capital in cities much smaller than L.A., like Boston and Las Vegas. What brings you here now, and what excites you about the small business climate in Los Angeles?
Tory Burch: L.A. was always top on our list. It was just a matter of timing and coordinating schedules.

JL: Absolutely. It really is one of the biggest markets in the country. And it’s such a diverse market, both by population and by industry, which makes it so exciting. There’s every industry here, and women are starting businesses in each of them.

Elizabeth Street Capital is just getting off the ground in L.A., but are there any Los Angeles-based businesses that you’re already anticipating?
JL: There are a few food ones that are exciting because someone who had a talent and a passion decided to make a commercial activity out of it.

TB: As you mentioned, Elizabeth Street Capital is just launching here, so this is something we’re about to delve into. I’m sure L.A. has a lot of unique things to offer, a lot of sport businesses and health and fitness businesses, which L.A. is the perfect market for.

JL [to Burch]: I love what you said during the fireside chat: men are better at networking than women are. One thing I’ve seen in our industry is that there are a lot more women helping women.

TB: [The Tory Burch Foundation/Bank of America] partnership is a perfect example of that.When the first article was written about our company, Jane Rosenthal, who cofounded Tribeca Productions, called me and said, “The article is great, but you shied away from the word ‘ambition.’” It was something that has stayed with me all of these years. I realized that was the case, but also that being ambitious seemed like a negative for women but not men. So that’s something I’d like to see change as well.

Mentorship is one of the pillars of the Elizabeth Street Capital program. During this morning’s discussion you mentioned a few people who you turn to for advice, but surely you yourself are a mentor to plenty of women. What are a few examples of wisdom you impart on people who are just starting out?
TB: The concept for Tory Burch was pretty simple, because it was something I was missing: beautifully made clothing that didn’t cost a fortune. If you have a unique idea, that’s very important. But there’s no such thing as an overnight success. It’s going to be a tremendous amount of hard work, and you have to be prepared for that. That’s often what I tell women who are both scaling their businesses and just starting out. I also tell them about social responsibility, because that’s not something companies traditionally think about early on. If you can make it part of the DNA of your culture, it’s great for business. And our culture is one of the reasons for our company’s success.

If you could start another business today, what would it be?
TB: Well I’m starting one—sport. Which feels like a different world! [Laughs.] But as for something different, I’m passionate about interiors, so maybe interior decorating. Or maybe an architect—but I guess I’d need a little training for that!

JL: If I weren’t doing banking, I’d want to do what Tory is doing.