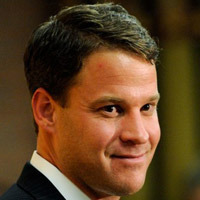 By “Top 10 Lane Kiffin Tweets” we mean “Top 10 Anti-Lane Kiffin Tweets” because after Saturday, what other kind of Lane Kiffin tweet could there be? Ranked #1 in pre-season standings, USC’s football team finished the season unranked with a 7-5 record. This Saturday’s season-ending loss to Notre Dame was salt in the wound.

At this point, nothing short of quartering head coach Kiffin and spiking his head on Tommy Trojan’s sword could satisfy USC fans. (Throw in his dad, defensive coordinator Monte Kiffin, for good measure.) Until then, there’s Twitter, where fans were vociferous in their contempt for Kiffin. In case you’re wondering, the reviled USC coach has a Twitter account (@lane_kiffin) with 28,709 followers and nary a peep since before game day.

10. @jaylensmith: Based on his track record, tomorrow Lane Kiffin will accept an offer as the next NFL commissioner. If I only had such luck.
Jaylen Smith, Seattle resident

9. @brandimpanter: The “Lane Kiffin Has Daddy Issues” sign on College Gameday today = the hardest I have laughed at anything in almost a year.
Brandi Panter, Colorado resident

8. @pourmecoffee: Lane Kiffin has done so poorly he will surely somehow get an even better football job.
Pourmecoffee, internet persona

5. @darrenrovell: Wait, Lane Kiffin gets PAID to do this?
Darren Rovell, sports writer

4. @joshwolfcomedy: If I was Lane Kiffin I would definitely stop for an In-n-Out burger on his way out of Los Angeles. #buhbye
Josh Wolf, comedian and writer on Chelsea Lately

3. @charliedaniels: If Lane Kiffin loses his job as head coach at USC he could always come back to U T and get a job as a tackling dummy.
Charlie Daniels, musician