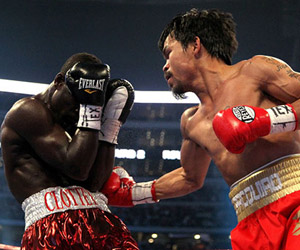 Well he did it: With close to 51,000 fans cheering in Cowboys Stadium, Manny Pacquiao defeated Joshua Clottey to successfully defend his welterweight title Saturday night. Two of the three ringside judges scored just one round for Clottey. The third gave them all to Pacquiao, making the major fight, which could be one of Clottey’s last, one of Pacquaio’s best.

As for Pacquaio’s trainer, Freddie Roach, also defending the title of Best Damned Trainer Alive that we gave him in our March issue, what can we say? We love to be right.

For more on Roach, check out this slide show of photographs of him in action taken by photographer Dustin Snipes.

And, just for fun, here’s one thing we’re not supposed to tell you about the profile:
Writer Sacha Feinman took three hooks to the ribs while sparring with the trainer. “Seeing how I throw a left hook was Freddie’s chance to play the journalist and example me,” says Feinman.