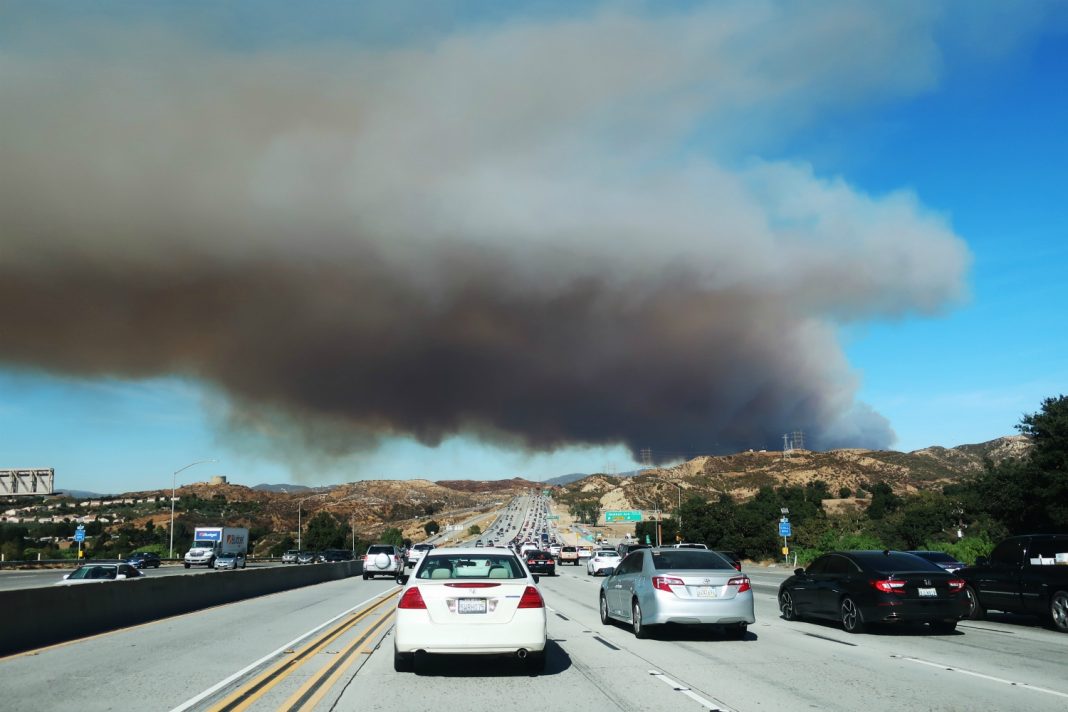 More than 600 firefighters are battling the Tick Fire, which continues to rage in Santa Clarita after it leapt the 14 Freeway last night powered by strong Santa Ana winds, destroying at least six structures so far with 40,000 forced to evacuate as the blaze surges southwest toward Sand Canyon.

The fire that began yesterday afternoon around 1:30 along Tick Canyon Road has already consumed 4,300 acres and is approximately 5 percent contained. The 14 Freeway has been closed in both directions, from Golden Valley Road north to Escondido Canyon Road, as the fire threatens an additional 16,000 structures, officials said at press conference this morning.

Confirming that six homes had been lost overnight, Los Angeles County Fire Department chief Daryl Osby added, “but we know there will be more.”

L.A. County Supervisor Kathryn Barger, whose 5th District includes Santa Clarita, said it is the “largest evacuation we’ve had.” Chief Osby couldn’t estimate when residents would be able to return to their homes. Meanwhile, emergency shelters have been set up at the College of Canyons and at West Ranch High School.

Extremely Critical Fire Weather Conditions continue today in southern California. Temperatures in the 90s with very low humidity will combine with wind gusts of up to 60 mph to create favorable conditions for extreme fire behavior and rapid growth. pic.twitter.com/yHqfvKvytT

The weather service at Oxnard warns that “very rapid fire spread and extreme fire behavior [are] possible with new ignitions” due to today’s dry heat and strong winds, especially in the mountains.

“The more it dries out the faster it’ll run if the fire really gets going,” Inspector Sky Cornell, an L.A. County Fire Department spokesperson, said, adding that his strike teams are monitoring the blaze “meticulously, second by second and minute by minute.”

The L.A. County Sheriff’s Department is tweeting up-to-the-minute info on road closures, shelters, and evacuations centers. And the L.A. County Fire Department will brief the press again on their progress at 5 p.m. this evening.

#TickFire Unified Incident Commanders from @LACOFD & @LASDHQ will be conducting a press briefing this evening at Central Park in Santa Clarita at 5:00pm. pic.twitter.com/QrRHE1tRGN

RELATED: These Maps Track Every Fire Burning Around L.A.