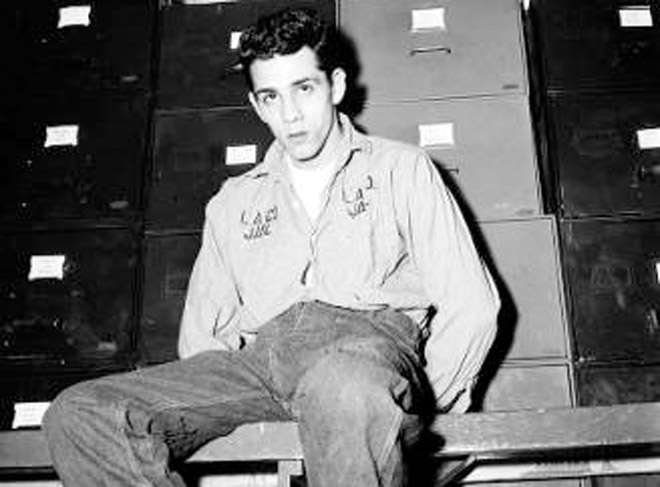 On May 12, 1958, in Department 42 of the Hall of Justice, two punks from East L.A. were on trial for a murder committed during the course of a robbery. Fifty-one-year-old Jose Castellanos, a local grocer, had been shot to death by 23-year-old Gregory Valenzuela. Castellanos and his wife were in their store at 435 South McDonnell Avenue when two would-be robbers came in and demanded money. Castellanos pulled out his own gun to fend off the crooks, managing to fire off a round before being mortally wounded. Mrs. Castellanos watched in horror as her husband died.

Sheriff’s Detective Sergeants N.L. Peterson and Ned Lovretovich rolled over to the scene of the shooting and began an investigation. Valenzuela was ID’d by Castellanos’ widow, and within a couple of days he was found hiding with four other young men in an empty house behind the home of a friend, Joseph Lozano.

Valenzuela told officers that he and an unnamed accomplice had decided “to hit” the Castellanos’ grocery store.

It’s possible that Valenzuela and his accomplice were members of White Fence, also known as WF, one of the oldest street gangs in East Los Angeles. Even though the gang claims that it dates back to 1911, it didn’t emerge as a formidable force until the 1930s, when it was a male sports team associated with the La Purisima Church. The WF name supposedly derives from a white picket fence that surrounded the church. The moniker may make the gang sound benign, but nothing could be further from the truth.

By 1957, when Castellanos was murdered, White Fence was one of the most powerful and violent gangs in the L.A. area, with criminal enterprises ranging from auto theft to murder. Over the years WF hasn’t vanished but has rather thrived. It now has members in Las Vegas, El Paso, Florida, and Guatemala. Diligent policework by detectives Peterson and Lovretovich resulted in the ID-ing of Valenzuela’s accomplice: 23-year-old Augustine Acosta. As killers will do, Acosta and Valenzuela developed a grudge against the cops who had arrested them, especially Sgt. Ned Lovretovich—and they were determined to get him back.

The day of the trial, as the defendants were being led back into the courtroom by the bailiff following an afternoon recess, they suddenly broke away and attacked Lovretovich with sharpened metal spoons. Lovretovich was not seriously injured, though he did sustain a stab wound to his right shoulder and an abrasion on his cheek. Valenzuela and Acosta were subdued by force and taken away.

When questioned, Gregory Valenzuela characterized the incident as “just a misunderstanding.” He claimed not to recall much of what had happened and said that he didn’t know why he’d jumped Lovretovich; later he would say his motive was that the detective was framing him.

Acosta’s interview was considerably more colorful than Valenzuela’s. Asked if he cared to tell the investigators what had happened in the courtroom, Acosta replied, “No. Fuck everybody. I don’t give a shit.” Where did Acosta get the spoon he’d sharpened into a shiv, they asked? “It’s for you to find out,” he replied. “You’re the law, not me.”

Acosta offered the same motive for the attack on Lovretovich as Valenzuela had: “Because the punk knows I’m not guilty and is railroading me.” Over the course of his questioning, Acosta unequivocally stated his reason for attacking the detective: “…I meant to kill the motherfucker,” he said.

Gregory Huerta Acosta and Augustine Acosta were found guilty of first-degree murder in the death of Jose Castellanos and were sentenced to life in state prison. The two also pled guilty to assault with intent to commit murder and injury to a county employee for the attack on Lovretovich. They received sentences to run concurrently with their life terms.